A New Jersey teenager who shared a TikTok clip that criticized China’s Muslim concentration camps in an eyelash tutorial video was banned from the video app on Monday.

On Saturday, 17-year-old Feroza Aziz went viral after sharing a clip that at first glance seemed to be an eye-lash tutorial. While explaining how to curl lashes, she then started to speak about the Uyghur crisis in China calling it a modern day ‘Holocaust’. She was banned just days later.

TikTok came under fire for suspending Aziz, who is Muslim, with critics alleging she was banned as an act of censorship by the app’s owner Chinese developer ByteDance, seeking to delete posts against the Chinese Communist Party.

TikTok released a statement on Wednesday, apologizing to Aziz for banning her from the platform and reinstating her account.

However, a TikTok spokesperson said that Aziz wasn’t suspended for her criticism of China’s Muslim concentration camps. The app said that she was suspended for another video where she joked about Osama bin Laden, according to BuzzFeed News.

New Jersey teenager Feroza Aziz, 17, was banned from TikTok on Monday after she shared a video criticizing China for its Muslim concentration camps on Saturday 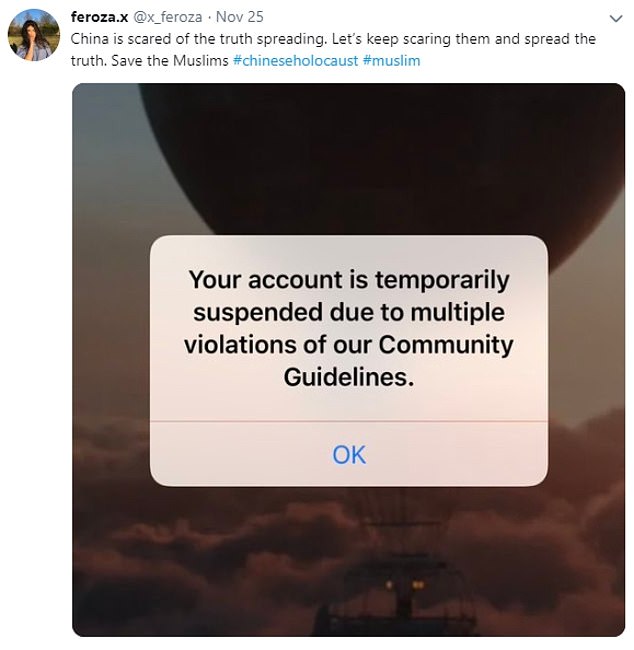 She shared this screenshot on Monday showing that her account was suspended, two days after she posted the video about the Uyghur genocide

In Aziz’s viral Saturday post she taught her followers how to curl their eyelashes while educating them about the Uighur Muslims crisis in China.

‘So, the first thing you need to do is grab your lash curler, curl your lashes, obviously,’ she said in her TikTok video. ‘Then, you’re gonna put them down and use the phone you’re using right now to search what’s happening in China, how they’re getting concentration camps, throwing innocent Muslims in there. … This is another Holocaust, yet no one is talking about it.’

An estimated one million Uyghur Muslims are currently imprisoned in internment camps in the northwest Xinjiang region, where families are separated and prisoners are tortured and forced to study communist propaganda.

Aziz’s account was taken down just days after posting that controversial video, and she took to Twitter to point blame towards China’s government.

‘TikTok has taken down my video spreading awareness on the Uyghur genocide. This is proof that China is using TikTok to not let the truth be set free. China is scared,’ she tweeted. 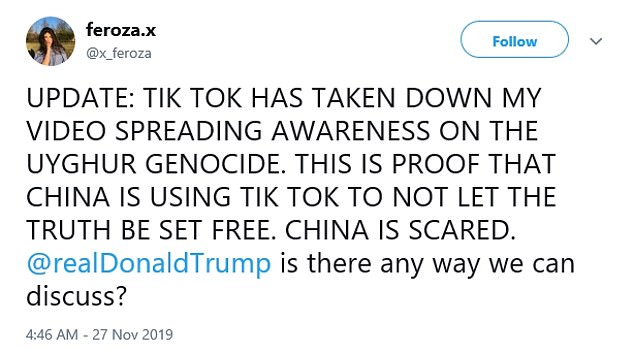 ‘TikTok has taken down my video spreading awareness on the uyghur genocide. This is proof that China is using TikTok to not let the truth be set free. China is scared,’ she shared on Wednesday

But TikTok says her account was actually suspended for another reason – for her clip crushing on terrorist Osama bin Laden which violated policies against content that include imagery related to terrorist figures.

In another TikTok post on November 14, Aziz talked about the boys she used to be attracted to compared to today. In it she jokingly included terrorist Osama bin Laden.

‘There’s a trend on TikTok where you post like, “The type of boys or girls I liked when I was little”. Mine was like, “I liked a lot of white guys, but now I like brown people” and at the end was [bin Laden] as a joke,’ she said to BuzzFeed.

‘While we recognize that this video may have been intended as satire, our policies on this front are currently strict. Any such content, when identified, is deemed a violation of our Community Guidelines and Terms of Service, resulting in a permanent ban of the account and associated devices,’ a TikTok spokesperson said.

‘Our moderation approach of banning devices associated with a banned account is designed to protect against the spread of coordinated malicious behavior – and it’s clear that this was not the intent here. We acknowledge that at times, this process will not be perfect. Humans will sometimes make mistakes, such as the one made today,’ the company added.

But Aziz isn’t convinced that TikTok shut down her account for that bin Laden clip. 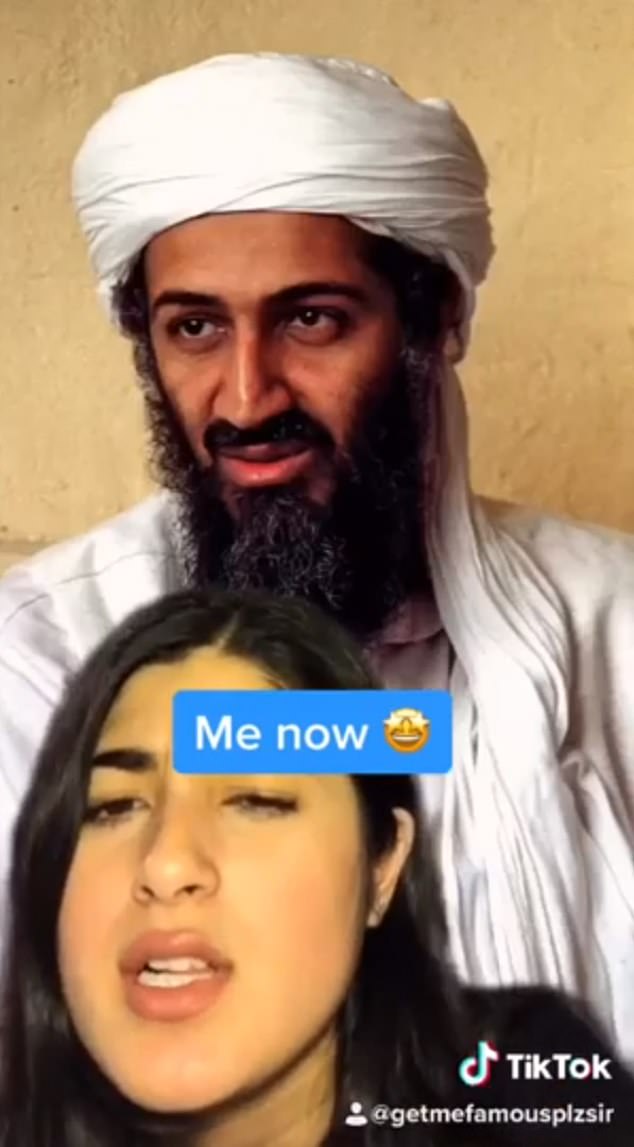 TikTok says she was actually banned for a November 14 post that joked about having a crush on terrorist Osama bin Laden. A grab of that video pictured above

She took to Twitter saying she didn’t believe TikTok’s claims and the timing from when she was banned coincided with her poignant post about China’s Muslim concentration camps.

‘I still find it suspicious that TikTok took down my video right when my posts on China’s concentration camps were made. Doesn’t sound right to me,’ she said.

‘Do I believe they took it away because of a unrelated satirical video that was deleted on a previous deleted account of mine? Right after I finished posting a 3 part video about the Uyghurs? No,’ she tweeted.

She added that her post about bin Laden was a joke and an example of dark humor taken too seriously.

‘Everybody has dark humor, and there are people on TikTok who post explicit things about murder and very intense stuff, and that’s not taken down. My thing that’s a joke that my group can laugh at, that Muslims and brown people can laugh at, that’s taken down,’ she said. 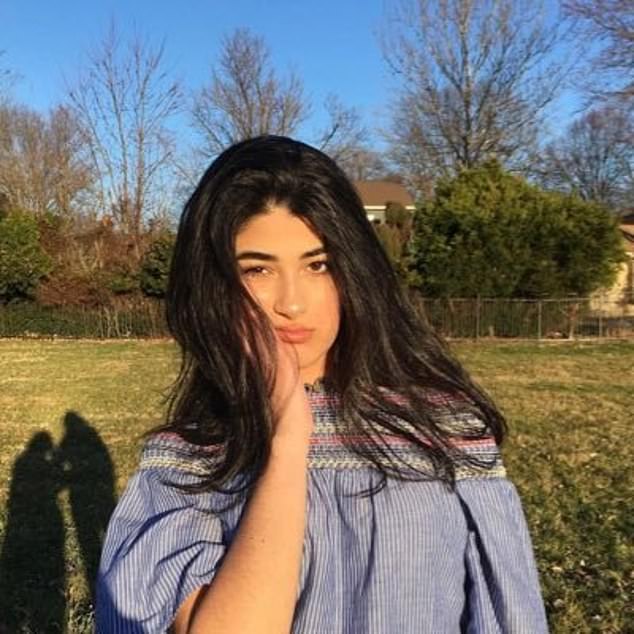 ‘I still find it suspicious that TikTok took down my video right when my posts on China’s concentration camps were made. Doesn’t sound right to me,’ Aziz said

Aziz has multiple TikTok accounts. TikTok says all of her linked accounts were shut down after they flagged the Osama bin Laden post

This isn’t the first time TikTok has come under scrutiny for ties to China.

The app has more than 110 million downloads in the U.S. alone.

The company hit back with a blog post last month saying: ‘We have never been asked by the Chinese government to remove any content and we would not do so if asked. Period.’