An 18-year-old who recently gave birth after being diagnosed with an incurable brain tumor is going Mexico for experimental treatment as there are no other options on US soil.

Dana Scatton, of Pennsylvania, was given three to nine months to live in December after she was diagnosed with diffuse intrinsic pontine glioma (DIPG), a disease with less than one percent chance for survival, while seven months pregnant.

The disease primarily affects about 300 children each year and is most commonly found in children younger than 10 years old, making her case extremely rare.

The teen gave birth to baby girl Aries Marie on January 4, a month early so she could undergo several round of radiation to halt the progression of the rapidly growing tumor without harming the child.

Last week, after completing radiation on February 1, her family decided their best option now is to head to an increasingly sought-after clinic in Mexico, which offers the only experimental treatment in the world for DIPG, in a bid to extend Dana’s life. 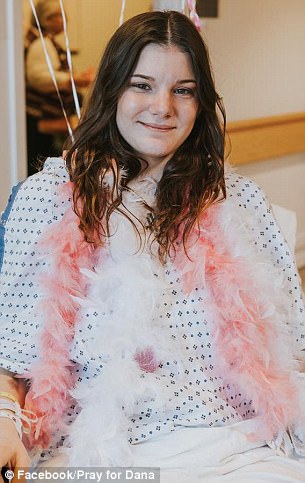 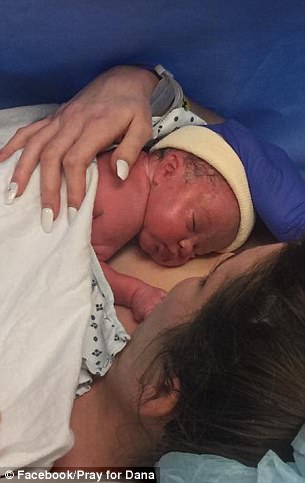 DIPG tumors usually start in the brain stem, the part of the organ that’s located just above the back of the neck and connected to the spine. It controls breathing, nerves and muscles that help people see, hear, walk, talk and eat.

Unfortunately, there is no known cure for the disease and scant treatment options due to lack of funding for research.

It is a vicious cycle: organizations are reluctant to fund research into something that seems so untreatable; most funding into child cancers goes to leukemia, which is the most researched child cancer.

Due to the tumor’s location in Dana’s brain, it has started taking over her motor functions – making it more difficult for her to walk, talk and breathe.

However, Dana and her family received good news earlier this month when results from her MRI scan, following her radiation treatments, revealed it has shrunk ‘with no signs of blocking her pons,’ the part of the brain involved in the control of breathing, communication and balance.

Now the family plans on going to Mexico for experimental chemotherapy treatment.

‘Leading up to this appointment, we’ve been discussing what treatment is going to be best for Dana,’ her family wrote on Dana’s Facebook page.

‘This was a huge decision. Any family going through this understands the process behind making this decision. However we once again put our faith in God to show us the way. And we believe He has pointed us towards Dr Siller and the team in Mexico,’ it read.

Diffuse intrinsic pontine glioma (DIPG) is a rare type of brain tumor that can’t be operated on because of it’s location within a crucial part of the brain, called the pons.

This area is responsible for a number of critical bodily functions, such as breathing, sleeping and blood pressure.

The high-grade brain tumor, which mostly affects children, tends to grow quickly and often spreads to other parts of the brain or spinal cord.

Most diagnoses occur in youngsters between the ages of five and 10. The cause of the tumor remains unknown.

More than 90 percent of its victims will die within 18 months of diagnosis, according to figures.

According to the National Cancer Institute, clinical trials have shown that traditional chemotherapy aren’t effective.

As a result, many parents of DIPG patients from all over the world have turned to Dr Alberto Siller, who has a clinic located in Monterrey, Mexico, as a last resort.

A family from Rogers, Arkansas flew to Monterrey, Mexico in July 2017 for their daughter Addy Sooter, three, who was diagnosed with DIPG, to receive experimental chemotherapy treatment at Dr Siller’s 0-19 Clinic.

In September 2017, an Australian family traveled to Monterrey in hopes of a last-ditch treatment for their then-four-year-old daughter Annabelle Nguyen, who was diagnosed with DIPG when she was two years old.

Last month, the Annabelle’s family revealed the now five-year-old has ‘no evidence of disease,’ a term used when scans and tests can’t find cancer in a person who has been treated for the illness.

Annabelle and Addy received intra-arterial chemotherapy, a type of treatment that delivers the anti-cancer medication directly to the tumor.

Unlike traditional chemotherapy – which is systemic, and circulates the whole body via the bloodstream – intra-arterial is a local treatment that only treats the tumor, thus reducing complications and side effects associated with the drug, such as nausea and vomiting.

The US currently doesn’t have any equivalent DIPG treatments. Furthermore, scientists at Johns Hopkins University, one of the few institutions researching DIPG, question whether intra-arterial chemotherapy is even effective against the disease. 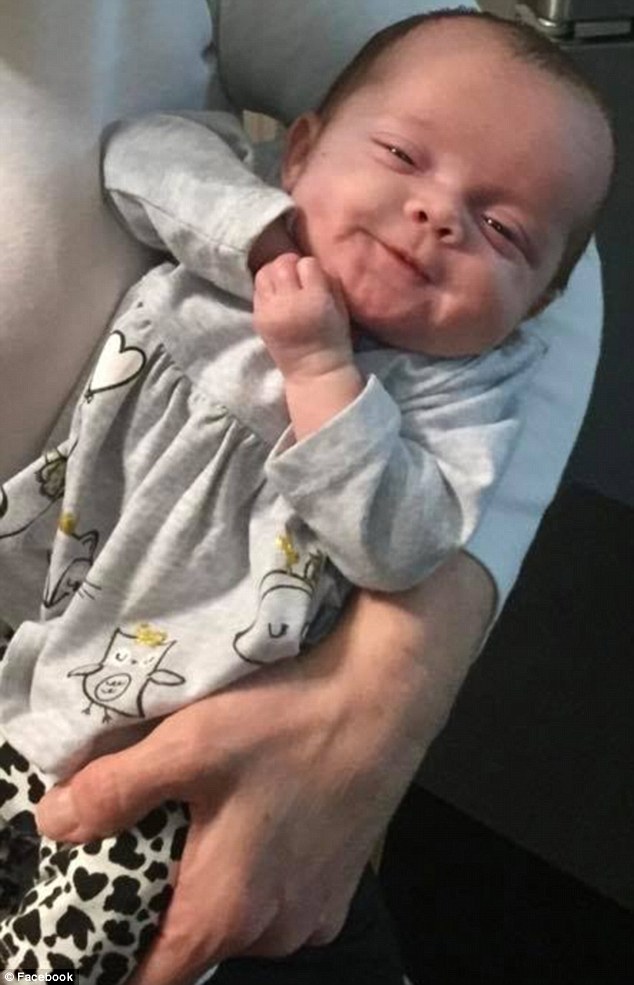 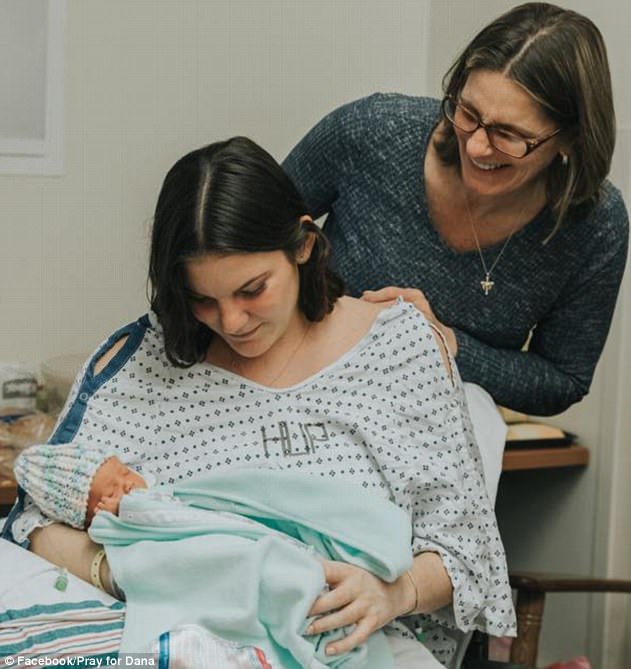 Dana’s mother Lenore, 51, told Daily Mail Online that her daughter’s diagnosis was devastating to the family

Dana told Daily Mail Online in December that right before she was diagnosed she started to experience difficulty speaking, which had become strenuous.

‘I noticed that it took me a little to swallow, then walking got harder and it was even hard to speak,’ Dana said.

She said things got worse in the beginning of December when she went to catch the bus to take her to school and her legs began to feel limp, leaving her too unable to walk properly.

At first Dana thought it could just be stress from the pregnancy and school.

‘I thought it could be the way the baby was sitting on nerves,’ she added.

Less than two weeks after her initial symptoms, Dana told her doctor what she was experiencing during a routine visit to check on the baby.

She was in the emergency room the next day where she underwent a cat scan and MRI that found a large tumor on the base of her brain.

Within hours of the MRI doctors delivered the diagnosis and prognosis.

Dana said the first thing that went through her mind when she heard the diagnosis was: ‘Is my baby going to be okay?’ 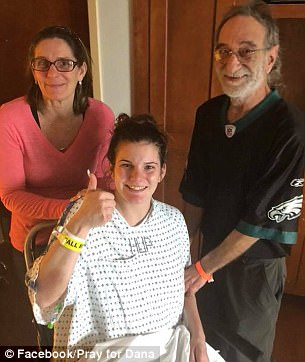 Dana said, ‘The battle has already been won,’ referring to the successful birth of her daughter. She is pictured with her parents before having the c-section

Her mother Lenore, 51, told Daily Mail Online she had a similar thought: ‘Am I going to lose my baby?’

While the prognosis of DIPG is devastating, Dana remains hopeful.

‘I’m not going to go by what they say, I’m expecting a miracle,’ she added.

Most diagnoses of DIPG occur in patients between five and 10 years old.

It is unknown what causes the tumor and doctors do not believe the pregnancy had an impact on the diagnosis.

‘Sometimes it gets harder to walk and it is strenuous because my muscles are always working,’ Dana said.

Radiation is the most common form of treatment to kill cancer cells and stop the tumors from growing.

The treatment provides a temporary cure to extend life, but does not fully rid the body of the disease.

The news of Dana’s diagnosis has been devastating to her and the family, according to Lenore.

She said: ‘We’re in kind of a daze. Your mind is going a mile a minute and it’s hard to absorb the things they tell you at the hospital.’

Both Lenore and Dana’s father Robert have taken time off of their jobs at Amazon and a YMCA to take care of their daughter full-time.

Dana is the youngest of nine children between her mother and father.

The support from family and friends has been overwhelming and Lenore said that since Dana’s brother JJ took to Facebook and made a GoFundMe for medical expenses, people from around the world including Ukraine and Germany have reached out to send their prayers and support.

Dana said: ‘I just want to be a wonderful mother.’