A teenager who rapped about stabbing people on YouTube has been jailed for murdering a 15-year-old boy in an alleged row over comments left on social media.

Michael Idehen, 18, was captured on CCTV plunging a knife into Kyron Webb’s chest in Moston, Manchester on October 17 last year.

The teenager, who was jailed on his 18th birthday, had previously uploaded a video to YouTube that talked about ‘cheffing’ a slang term for stabbing.

During his trial he claimed Kyron had left derogatory comments on a video he posted on Snapchat and even threatened to stab him.

But he was yesterday jailed to a minimum of 15 years behind bars for the younger boy’s murder.

A 17-year-old boy, who was 16 at the time of Kyron’s murder and who cannot be named for legal reasons, was also jailed for five years after pleading guilty to manslaughter.

The YouTube video called ‘No Gas’ and posted by a group named ‘MB26’ shows Idehen rapping about ‘trying to chef your friend’.

The clip, which appeared online in August 2017, features a number of masked youths and includes the repeated rap ‘he backed his shank [knife], he waived it around, but he didn’t do no cheffing’. 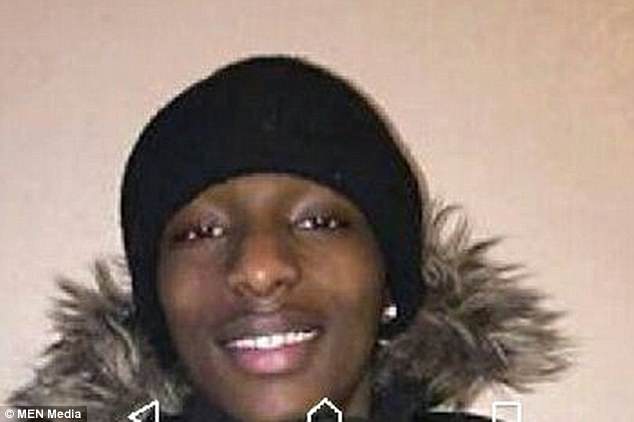 Idehen claimed Kyron Webb (pictured) had commented on his Snapchat video threatening to stab him. But he was jailed for life with a minimum of 15 years for murder

Manchester Crown Court heard that Idehen, who was 17 at the time of the attack and had previous convictions for knife possession and robbery, knew Kyron before it happened. Phone evidence suggested they had been in contact before.

Prior to the fatal attack on October 17, Idehen and his co-defendant had taken a bus to Moston to meet up with another group for a ‘pre-arranged’ meeting, prosecutor Nicholas Johnson QC said.

At around 6.45pm, student Kyron arrived in Moston Lane. Idehen walked over to speak to Kyron, who moved to Manchester from south London with his mother.

The court heard Idehen’s co-defendant then arrived and moved towards Kyron in an ‘intimidating manner’.

Kyron and the then 16-year-old moved away for a short time, before Idehen’s friend pulled a metal bar from his waistband.

The three came back and stood together, and the 16-year-old then made two further ‘intimidating movements’ towards Kyron. CCTV footage subsequently showed Idehen stab Kyron through the heart.

Both defendants moved away, but around a minute later Idehen returned to Kyron, who was leaning against a wall, and stabbed him in the back.

The pair fled, leaving Kyron, who was collapsed on the floor, for dead.

A witness said they heard the taller of the three say ‘come on then, I’m here now’ and ‘well I’m here now’, and said that Kyron, the shorter boy, was being ‘bullied’ by the others. 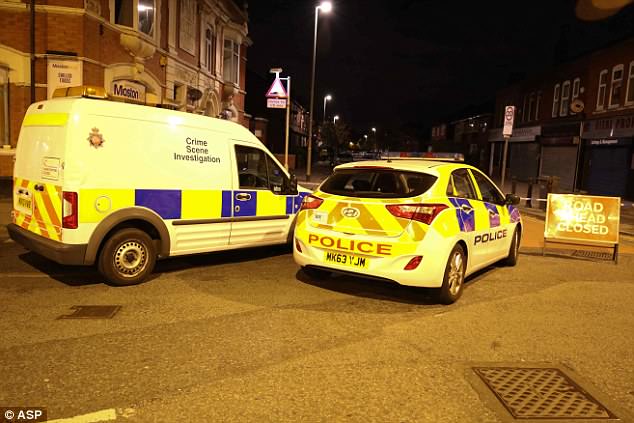 Crime scene: Kyron Webb died in hospital three days later after being stabbed in the heart and back

Another witness, who gave first aid to Kyron, said she heard someone say ‘go on big man, get your tool out’.

The court heard that Idehen received two texts from his brother within minutes of the attack, saying ‘be careful when you come, mum might search you’ and ‘dad’s coming to look for you now’.

Kyron was rushed to hospital, where he died three days later. A knife was found in the bag he was carrying at the time of his death.

Both defendants were arrested the day Kyron died.

When he first spoke to police, he claimed to have an alibi. He then said Kyron had tried to rob him at a cash machine.

During his third account, he said he had been threatened and asked for cannabis, and was attacked after trying to act as peacemaker between Kyron and the other defendant.

Idehen claimed he made a derogatory comment on Snapchat about a rap group, to which Kyron took offence and tried to stab him.

Idehen’s co-defendant admitted being present and having the metal bar, which he said he used for protection.

A victim impact statement by Kyron’s mother Rachel Webb, summarised by Mr Johnson, said: ‘She feels she has also died in many ways.’ 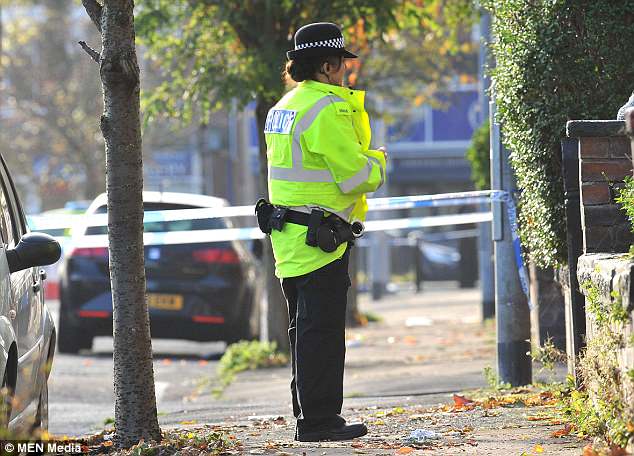 Idehen and another boy, who cannot be named for legal reasons, have been jailed for the attack

Mr Johnson said members of Kyron’s family have had to undergo therapy.

He said the attack was not pre-planned and that Idehen did not intend to kill Kyron.

Mr Hayton said after his release, Idehen, of Moston, wants to warn other young men of the dangers of carrying knives.

A letter Idehen wrote to Kyron’s family was summarised in court. Mr Hayton said: ‘Whatever else happens to him [Idehen] he will never forgive himself for what he did.’

Mr Reid said the boy was ‘frightened’ by what he saw and that he wanted to run away, but that Idehen told him to stay.

Sentencing, Judge David Stockdale QC said: ‘Kyron had done nothing to justify, excuse or explain the brutal and cowardly attack on him.

‘He offered his attackers no violence nor any threat of violence at all.

Kyron Webb’s mother Rachel Webb wrote a poignant poem about her son after his death. Here is the poem in full

I touched my belly overwhelmed as life kicked inside me

My smile shone bright as I weighed up the possibilities

What would you look like, what type of man would you be

What gifts and qualities would you bare, would you look like me

Then you came into the world a strong fighting warrior

Strong and valiant, beautiful oh what an honour

I felt the moment I looked in your eyes, your smile showed you recognised me

My guardian of my heart I was your mummy

At 8 months you walked, you spoke before one

While your friends still crawled you decided to run

You were blessed with wisdom, on the gifted and talented register you were placed

You were artistic, a singing voice like an angel and yes you had my face

Your talents were endless, what you touched turned to gold

Your deepest ambition to become an architect you told

Your heart was big, my protector my friend

You had a strength that prevailed to the end

You were a brother, a cousin, a nephew, a grandson, friend and so much more

You had endless potential that everyone saw

You did give trouble but your grades were high

Your potential was great, you had the strength to fly

During this investigation so much will be said, but I will remember 15 years you were my baby instead

I love you sweetie it’s time to fly, your daddy’s love will carry you by

Forgive me you hated to see me cry

Your dad broke down as he said goodbye.

We were united in love, the three of us forever

As a unit we remain forever and ever

Your departure has left a whole, a void a pain

May his peace be with you till we meet again

I realise now to our family you were our happiness, our pride and joy

I ache in bitter sorrow as I remember my little boy

Rest easy in Angels arms, remember to look down on me

You will always be my king, my thoughts and every memories

I love You Kyron Antonio Webb for all eternity

I will never understand why you were taken from me

‘This case provides yet another example of the catastrophic consequences that follow when knives are carried and used as weapons on the street.

‘The life of a happy and healthy 15-year-old was taken away, leaving his parents and his wider family devastated.

‘When those who carry knives on the streets of Manchester come before the courts, they will receive little sympathy.’

Detective Chief Inspector Stuart Wilkinson, of GMP’s Major Incident Team, said: ‘As they have been since that tragic day last October, our thoughts remain with Kyron’s family, who are sadly having to carry on with their lives without their beloved son.

‘The fatal actions of Idehen and his co-defendant have undoubtedly ruined the lives of Kyron’s family and devastated those who loved him so very much.

‘Since this happened, we have been searching for answers for Kyron’s family and only today have we been able to provide them with the comfort that the people responsible for taking his life are now in prison.

‘Tackling knife crime is one of our main priorities and we will do everything we can to take those who carry knives off our streets.

‘If you know someone who carries a knife, please tell us – that phone call could be the one thing that stops someone else’s life being tragically taken away.’

Kyron’s mother Rachel wrote a heartbreaking poem to pay tribute to her son, wich was read out in court.