Teen rescued from top of CAMERA TOWER at Reading Festival

A teenager had to be rescued from the top of a camera tower in front of stunned music fans at the Reading Festival.

The 17-year-old climbed up during a performance by US rapper Eminem, but had more trouble getting down.

Firefighters and paramedics were called to coax him down safely as a large crowd gathered to watch.

Shocking footage shows the teenager at the top of a camera tower, where he climbed while rapper Eminem performed

The festival goer managed to climb up the scaffolding in the middle of the main arena where television cameras were usually trained at the main stage.

The hoodie-wearing spectator was spotted shortly after Eminem finished his set, which the rapper refused permission for it to be broadcast. 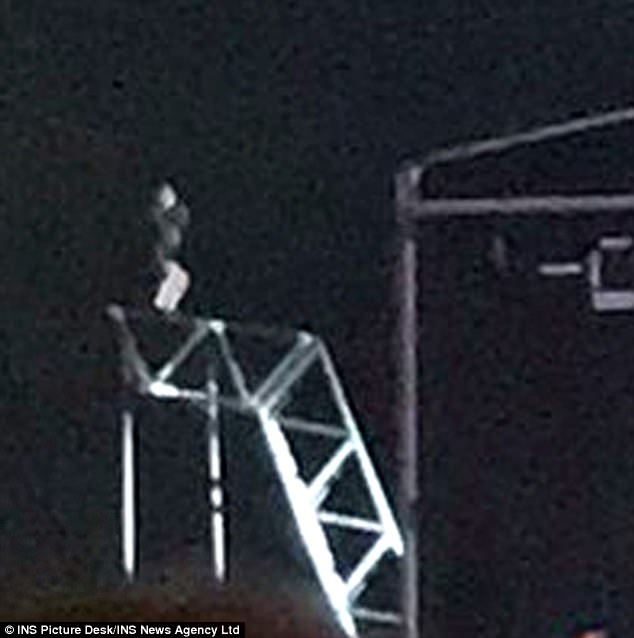 Security personnel pushed back the crowds as the paramedics from South Central Ambulance Service and Royal Berkshire Fire Fighters were called in to get the unnamed teenager back down on the ground safely.

One stunned audience member said: ‘I don’t know how long he was up there but people started to notice him after Eminem finished his set.

‘He was sat on the edge, right at the very top of the scaffolding, dangling his feet over the edge, while he was playing on his phone.

‘He was really playing up to the crowd at one point. He was climbing up and down the top bit of the rig that is used for holding up the speakers in the middle of the main arena.

One festival goer said they couldn’t look while he was swinging his legs and arms around.

Joe Rooqz said on Twitter: ‘He was hanging with his legs swinging on one arm a minute ago.

‘Well when he decides he wants to come down I hope he manages it.

After almost 45 minute atop the structure he climbed down and friends were fearing he was set to be banned from the rest of the festival in the Berkshire town.