Teen says teacher encouraged his classmates to haze him

A South Florida prep school student and son of a Miami-Dade police officer has claimed that he was the victim of hazing encouraged by his English teacher.

The 16-year-old student, who has not been named, said that he was subjected to in-class abuse by his classmates at the all-boys Belen Jesuit Preparatory School because he did not bring in a bottled water donation for the school’s annual festival, CBS4 News reported.

The teen alleged that the abuse occurred on February 5, during class and was encouraged by his English teacher, Cristina Ramirez.

A 16-year-old student at Belen Jesuit Preparatory School in Florida has accused English teacher Cristina Ramirez of encouraging his classmates to haze him on February 5. Ramirez denies that she witnessed or participated in any kind of hazing of the boy

The teen reportedly told investigators that Ramirez provided two of his classmates with ‘caution’ tape and then told them to tie him down to a chair. Ramirez then allegedly instructed other students to throw ‘non-lethal’ objects at the teen, including pencils, shoes and balled up paper.

The teen admitted that he had uttered a vulgar word at Ramirez and was given a one-day suspension as a result.

The suspension was lifted after the teen claimed to have been hazed.

Ramirez, who has taught for more than twenty years, was placed on leave by the school while the police investigate the alleged incident.

Through her lawyer, Ramirez has denied the student’s claims, stating that she was not involved in and did not witness any alleged hazing of the student. 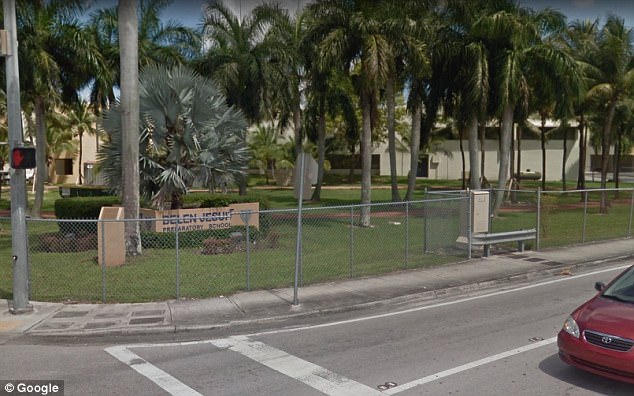 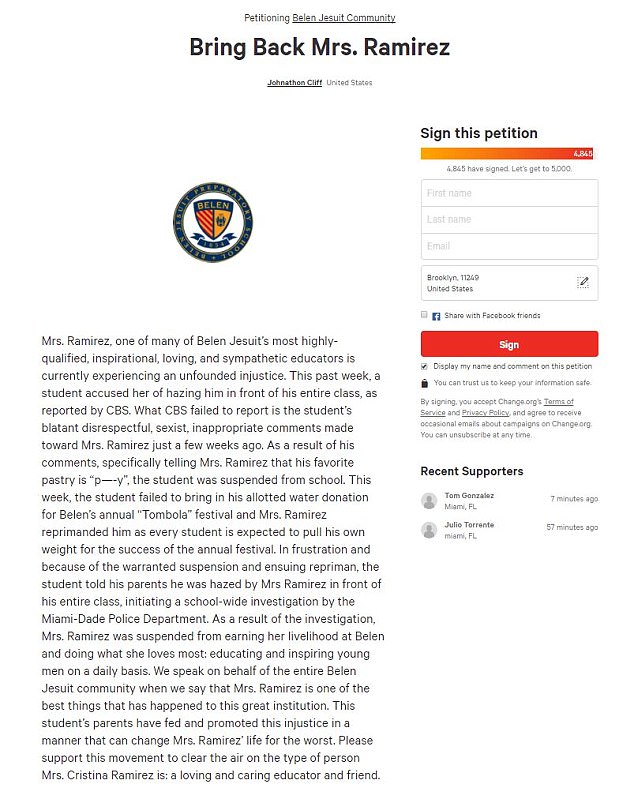 A petition encouraging Belen Jesuit to ‘Bring Back Mrs. Ramirez’ claimed that the alleged victim of the hazing had used a vulgar term in front of Ramirez and then made the hazing claim after having been reprimanded and suspended

Ramirez’s lawyer produced an e-mail, apparently sent on February 5, the same day as the alleged incident, in which the student who made the hazing claims appears to apologize for having said a vulgar term in class.

In the e-mail, the student alleged wrote that he ‘would never mean to disrespect anyone in such a way’ and noted that he ‘has a girlfriend myself and cannot imagine saying something so inappropriate to her. For whatever it’s worth, I’m sorry.’

The student did not mention the alleged hazing.

A petition urging the prep school to ‘Bring Back Mrs. Ramirez,’ posted on Change.org, and signed by more than 4,800 people, appears to provide some additional background into what happened.

‘What CBS failed to report is the student’s blatant disrespectful, sexist, inappropriate comments made toward Mrs. Ramirez just a few weeks ago,’ wrote petition starter Johnathon Cliff, who described Ramirez as being ‘Belen Jesuit’s most highly-qualified, inspirational, loving, and sympathetic educators.’

‘As a result of his comments, specifically telling Mrs. Ramirez that his favorite pastry is “p—-y”, the student was suspended from school,’ Cliff noted. ‘This week, the student failed to bring in his allotted water donation for Belen’s annual “Tombola” festival and Mrs. Ramirez reprimanded him as every student is expected to pull his own weight for the success of the annual festival.

‘In frustration and because of the warranted suspension and ensuing repriman [sic], the student told his parents he was hazed by Mrs Ramirez in front of his entire class, initiating a school-wide investigation by the Miami-Dade Police Department.’

Miami-Dade Police told CBS4 News that the fact that the teen’s parent is a fellow police officer has no bearing on how they are conducting their investigation into the incident.

If the hazing claims are proven to be true, the state’s attorney’s office would be the ones who decide what charges, if any, would be brought against those involved in the incident.