A teen rider has shared graphic images of her horse’s bleeding buttocks after they were sliced open by a ‘speeding’ car.

Seline Damar, 19, was out riding in Woodborough in Nottinghamshire, when a driver in his 70s rammed into the back of her 12-year-old gelding, Spot.

Ms Damar said the blame for the accident is at the feet of the motorist who was ‘too close’ and ‘impatient’ when he crashed into the horse. 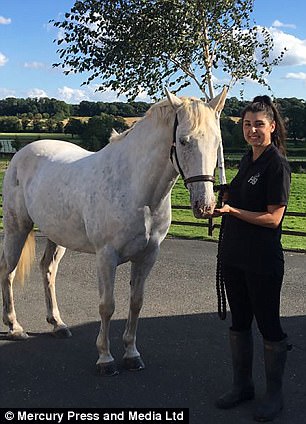 Seline Damar, 19, was out riding in Nottinghamshire, when a driver in his 70s rammed into the back of her 12-year-old gelding, Spot. Left, his injuries and right, Ms Damar and Spot

Spot was left with deep lacerations across his hind legs and Ms Damar claimed the actions of the driver put her life at risk.

Shocking images show the car’s wing mirror crushed backwards from the force of the smash, the passenger side window shattered and a deep dent in the bodywork.

Ms Damar, from Carlton in Nottingham, said: ‘It was horrible – when things like this happen it’s like something has happened to your baby.

‘We were out for a hack enjoying the sunshine when it happened. He got lacerations on his hind and blood was gushing down his legs.

‘I jumped off straight away.

‘Spot was flaring his nostrils and his eyes were bulging out. You could see he was scared.

‘He just got too close and this happened, he was 100 per cent in the wrong.’

Ms Damar, who has been riding since she was five years old, claims the driver was defensive when he stopped and placed the blame on her. 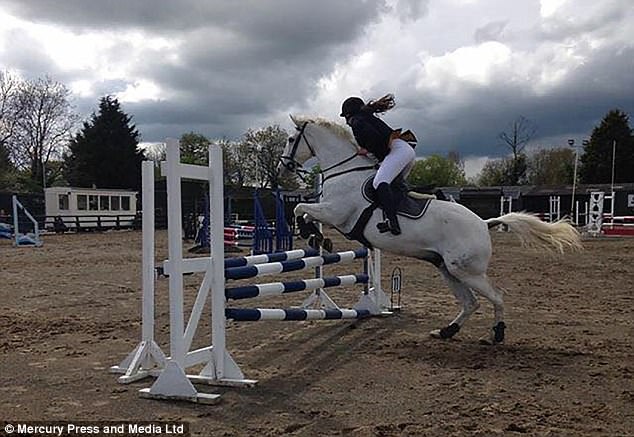 Ms Damar, who has been riding since she was five years old. Pictured, she leaps over a fence while riding Spot

She said: ‘The driver stopped his car and got out but never once asked if I or the horse were ok.

‘Straight away he started blaming me and said Spot had been spooked out but he was just walking minding his own business. The driver simply got too close.

‘His wing mirror was damaged from where he hit us, the passenger window was shattered and there was an obvious dent in the car.’

Ms Damar rang the emergency vet who sedated Spot at the roadside in order to treat the wounds which covered ten inches of his back end.

She said: ‘I took all his tack off and brought him treats to try and calm him down, he was really lucky he didn’t get glass into his wounds.

‘The vet was with him about half an hour before he was loaded on to a lorry and taken back to the stables.

‘I’m sharing these pictures and what happened to Spot to educate drivers that don’t have a clue about horses.

‘Don’t risk it – it could have been so much worse. If Spot had reacted differently and bolted he could have been very badly injured or worse, and I could have ended up through the car windscreen and been killed. 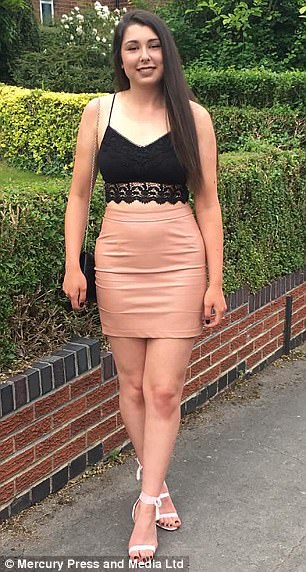 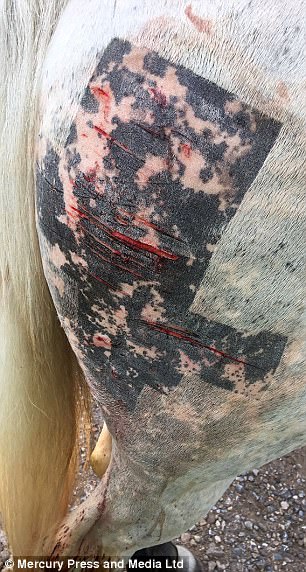 Ms Damar (left) said the blame for the accident solely belongs to the driver, who caused lacerations on her horse’s buttocks (right)

‘People need to be more patient and wait until they can pass wide and slow.’

Director of Safety at BHS Alan Hiscox said: ‘The British Horse Society are saddened to hear about this latest incident but are pleased to hear that both horse and rider are safe and well.

‘Unfortunately incidents between riders and vehicles are common. In response to the alarming number of incidents, the BHS has launched its Dead Slow campaign, calling on drivers to slow down to 15mph when they see a horse, and pass wide and slow.

‘The BHS encourages horse riders to wear hi-vis at all times on the road, even in bright sunlight.’

Nottingham Police confirmed that the incident had been reported to them.

A Nottingham Police spokesman said: ‘We were called at about 1.50pm on August 16 to a report of a collision between a car and a horse.

‘It happened on Bank Hill, Woodborough, no-one suffered any injuries but the horse required a vet. No arrests have been made.’