Charlotte Mitchell, 13, who died of a brain tumour this month, will transform up to 15 lives through organ and tissue donations

A girl of 13 who died of a brain tumour will transform up to 15 lives through organ and tissue donations, her mother has said.

Charlotte Mitchell had the aggressive disease known as glioblastoma and died earlier this month – just six weeks after her diagnosis.

Her grieving mother has now urged parents to discuss donating with their children from an early age.

She said it could help save more lives because the law in England still requires donors to ‘opt in’ before they die.

Charlotte had the same type of tumour that killed Labour peer Tessa Jowell.

The teenager died before she could undergo treatment at Bristol Royal Hospital for Children.

Her mother Karen, 49, said last night: ‘We don’t know why it has taken so long that you still have to opt in, the law needs to change quicker.’ 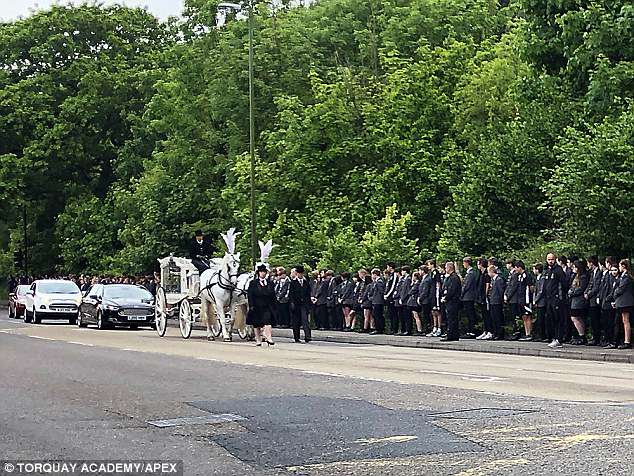 The teenager died before she could undergo treatment at Bristol Royal Hospital for Children. Pictured: More than 1,000 students and staff from a school lined the road to pay their final respects to Charlotte

‘Charlotte just said she understood and said ‘it will give someone else a chance at life’.’

Miss Mitchell, from Torquay, Devon, added: ‘Without a doubt it has given us solace knowing how many people her organs might help. It’s one of the only things that keeps me going.’ 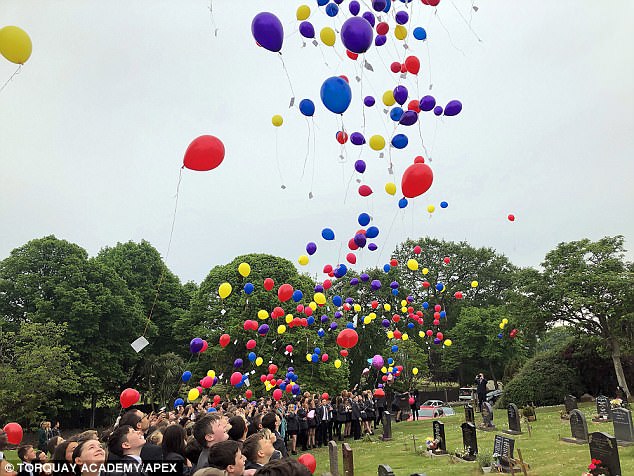 Everyone who attended the funeral had written a message to Charlotte on paper that was infused with flower seeds.These were tied to biodegradable balloons that were released

In February, MPs backed a bill in Parliament which would change the law to ‘opt out’, meaning people would automatically be donors unless they say otherwise. However, the bill has not yet come into force.

Miss Mitchell, a paramedic for South Western Ambulance Service, was told by a nurse that her only child could help up to 15 recipients.

The teenager can donate up to nine organs such as the heart, pancreas and kidneys along with tissues including the corneas, skin and bone.