A teenage girl who received a live-saving heart transplant in 2019 has revealed she wears a keepsake ring belonging to her donor, sent to her by the 19-year-old’s family.

Kayleigh Llewellyn, 13, from Seaham, County Durham, received a heart transplant from a 19-year-old girl just before Christmas 2019, three months after she was diagnosed with cardiomyopathy.

More than a year on, Kayleigh and her parents, Shaun, 50 and Sonia, 41, revealed on Good Morning Britain that the two families are still in contact after Kayleigh managed to write the donor’s family a letter of thanks following the operation.

The teen, who’s been shielding at home during the coronavirus pandemic, touched viewers by revealing her donor’s family sent her a Pandora ring which had belonged to their daughter.

They sent the keepsake to Kayleigh after she started making and selling jewellery in order to raise funds for the NHS in 2020.

People praised the teen and her family for raising awareness on cardiomyopathy, a condition which affects the heart muscle and makes it harder for your heart to pump blood to the rest of your body.

Speaking to Piers Morgan and Susanna Reid about the transplant, Kayleigh’s dad Shaun said: ‘It was the best Christmas present we could ask for, the relief was just amazing.

‘Kayleigh was on a life support machine, there was no end in sight,’ the father said, adding that his daughter had gone from a ‘healthy girl’ to struggling to live in a ‘matter of weeks.’

Susanna revealed that even though the families of organ donors must remain anonymous, Kayleigh had managed to communicate with them and sent a letter of thanks.

‘I just wrote how grateful I was that in that moment they decided to give their organs,’ the teen said. 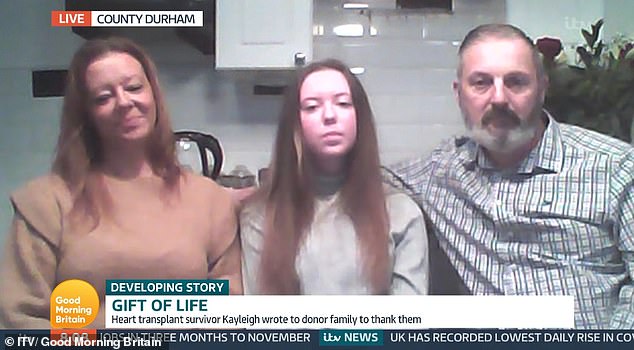 Kayleigh Llewellyn, 13, from Seaham, County Durham, received a heart transplant from an anonymous 19-year-old girl just before Christmas 2019, three months after she was diagnosed with cardiomyopathy.

‘I shared what I’ve been through, my story, and how old I was because I couldn’t say my name at the time,’ she added.

And this bond has remained strong throughout the pandemic, after Kayleigh had recovered from her transplant.

The teenager took to creating jewellery, which she sold during lockdown to raise funds for the NHS.

Mother Sonia revealed Kayleigh had sent an infinity necklace to the donor’s family, who had responded by sending her a Pandora ring that used to belong to the donor.

The teenager revealed she had put the ring on her necklace and was wearing it.

The family repeated how grateful they were. 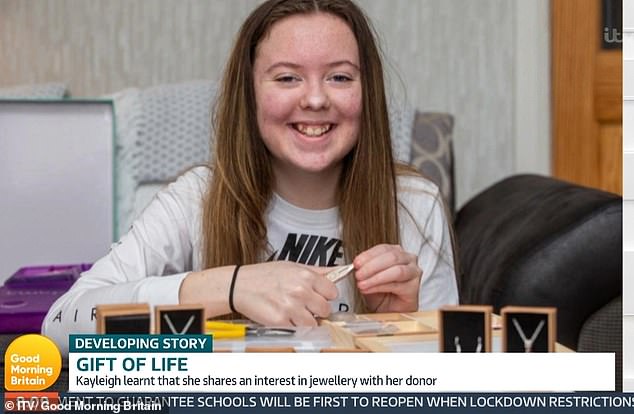 During the pandemic, Kayleigh started to create jewellery to raise funds for the NHS and received a Pandora ring that used to belong to her donor

‘From ten weeks, we thought we were not going to have Kayleigh from one day to the next and I can’t thank them enough, Shaun said.

Since then, the family have been shielding due to the coronavirus pandemic, an experience which Kayleigh compared to the movie Groundhog Day, where each day repeats itself.

People were touched by Kayleigh’s story and praised her and her family for raising awareness of cardiomyopathy.

‘Beautiful. I also have a cardiomyopathy. So glad it’s getting awareness. Live a long and happy life Kayleigh,’ one said. 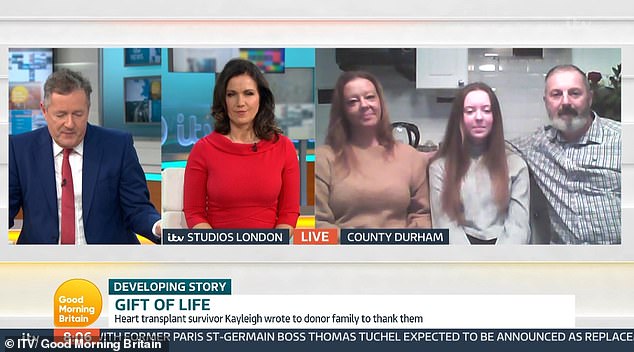 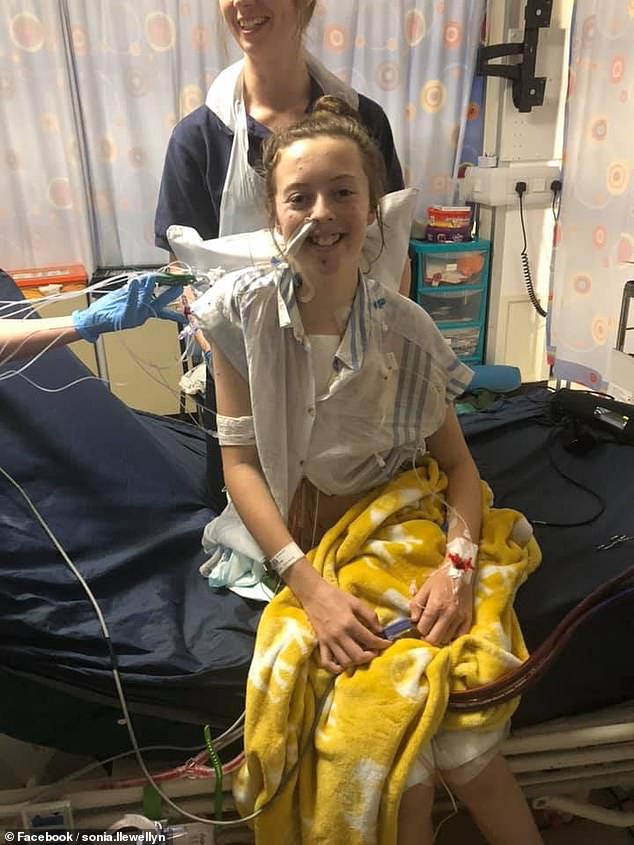 Kayleigh in hospital during her treatment for cardiomyopathy in 2019, when she was hooked on a life support machine to help her breath

‘Thank you for talking about cardiomyopathy, my little girl (1) has this condition and it definitely is a disease that needs to be talked about more! Great that she’s doing so well, what a brave inspirational girl,’ said one parent.

‘Donor families are the heroes. The gift they give to other families in their time of grief is inspirational. My son had had two transplants and his donor and their family become part of all our celebrations even though we have not had contact,’ said another.

‘I can feel for that family. As my 13yr old daughter. Had open heart surgery. Worse time of our lives,’ said another.

Cardiomyopathy is a disease of the heart muscle that affects its size, shape and structure.

The condition is usually inherited.

The three main types of cardiomyopathy are:

All of these types of cardiomyopathy affect the heart’s ability to pump blood around the body efficiently.

They can also impact the way electrical signals make the organ beat.

There is no cure, however, in most cases people’s quality or length of life is unaffected.

Therapies may include medication, treatment to normalise heart rhythm, pacemakers and, in rare cases, heart surgery or transplants.

Kayleigh fell ill in autumn 2019 when she woke up one morning for school struggling to breathe.

Doctors diagnosed her with cardiomyopathy and, to the shock of Kayleigh’s parents, warned a heart transplant was her only chance of survival.

The disease causes the walls of the heart to become thick or stretched, reducing the heart’s ability to pump blood. It can lead to heart failure or sudden death.

Kayleigh was wired up to machines in hospital that pumped blood around her body for her, giving her heart a rest while she waited for a donor.

After around six weeks in intensive care, Kayleigh – who spent some time in a coma – was told she would receive a new heart in time for Christmas 2019.

She woke up with breathing difficulties and took the day off school – but her parents thought it was her asthma.

The next day, she had chest pains. Other signs of cardiomyopathy include swelling of the ankles and dizziness.

Kayleigh was taken to Sunderland Royal Hospital that same day after her parents rang 111.

Her heart rate was found to be abnormally high and tests confirmed that she had cardiomyopathy.

The disease is a frequent cause of sudden cardiac arrest in young people, according to the National Heart, Lung and Blood Institute.

It cannot be cured. Treatment is usually to slow the progression. Drugs and changes to lifestyle are considered before surgery.

In Kayleigh’s case, doctors said she urgently needed a heart transplant to save her life.

She has been cared for at the specialist heart department at the Freeman Hospital ever since, with her childminder mother by her side the whole time.

Kayleigh had a temporary ventricular assist device fitted to the left side of her heart, which can keep blood pumping for patients with a damaged heart.

The right side was linked to an ECMO machine that pumped and oxygenated blood outside her body, allowing her heart and lungs to rest.

After a month in intensive care, Kayleigh was placed on the urgent transplant list in November which fast-tracked her to receive a heart.