Teen who Snapchatted her own car crash fined $2000

By April Glover and Yael Brender For Daily Mail Australia

A drunk teenage driver has been fined $2000 and lost her license after crashing her car while speeding and using Snapchat at the same time.

The 19-year-old from Dennington, Victoria, was videoing her dangerous drive on the photo-sharing app when she veered off the road and crashed while three times the legal alcohol limit, according to 9NEWS.

Police used the footage as damning evidence to charge the woman with speeding, careless driving, a blood alcohol reading of 0.164 and using a mobile phone while driving.

A teenager from from Dennington, Victoria, was videoing her dangerous joyride on Snapchat

She faced Warrnambool Magistrates’ Court in December and will not be allowed back behind the wheel for 16 months.

Victoria Police shared the Snapchat footage from the woman’s mobile phone, which had been left with a Mazda symbol imprint from the force of the airbag deploying.

‘Oh snap! This is footage of a driver’s Snapchat video taken seconds before she ran off the road and crashed, thankfully without serious injury,’ the caption read.

‘The phone’s screen bears the imprint of a Mazda logo which crash investigators believe was caused by the deployment of the airbag.’

The cautionary post attracted thousands of reactions from appalled social media users who slammed the woman for her actions.

‘She’s lucky she didn’t end up with the Mazda logo indented in her skull,’ one person commented under the video.

‘If you don’t care about your own life (obviously if you’re stupid enough to do this) then find another way of endangering yourself without risking innocent people around you,’ another wrote. 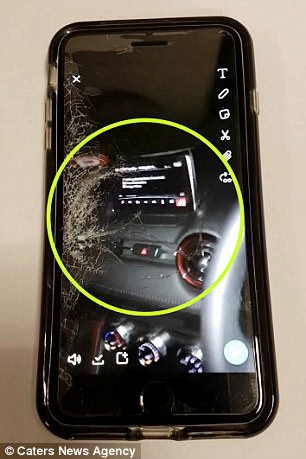 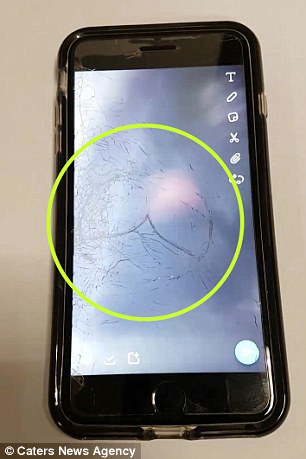 ‘The phone’s screen bears the imprint of a Mazda logo which crash investigators believe was caused by the deployment of the airbag,’ Victoria Police wrote on Facebook with the video