A 17-year-old boy has been charged for allegedly stabbing another teen during a wild beachside brawl that was captured in a disturbing video.

Police confirmed the accused knifeman was arrested at Lismore Police Station shortly before 11am on Tuesday and charged with affray and wounding a person with the intent to cause grievous bodily harm.

Footage shows a 16-year-old in a white shirt and a backpack fighting with another male in dark clothing brandishing a knife at Murray’s Beach in Sawtell on the NSW North Coast, as over 100 other teens at the illegal beach bash watch on in horror.

A local MP even warned young people who at the bloody scene or later saw it circulating on social media to seek counselling.

Some try to pull the pair apart as punches are being thrown but the altercation continued and the teen in the white shirt can be seen getting stabbed with a frenzied overhead strike.

The young man was fighting for his life after being rushed to Coffs Harbour Base Hospital just after 8pm on Sunday and is now in a serious but stable condition.

Emergency services found him with wounds to his back, abdomen and arms as witnesses tried desperately to assist before ambulance crews arrived.

‘The fight started between a number of other parties,’ Chief Inspector Brendan Gorman said.

‘One male intervened, then the alleged offender intervened in that fight.’

After the lockdown-breaching party was dispersed by police, running street battles broke out in the normally-quiet community.

Investigators seized a number of items from the scene and spent the past 24 scrolling through CCTV footage.

With the graphic video circulating on social media, Coffs Harbour MP Gurmesh Singh urged those who were there or who have watched it online to seek therapy if needed. 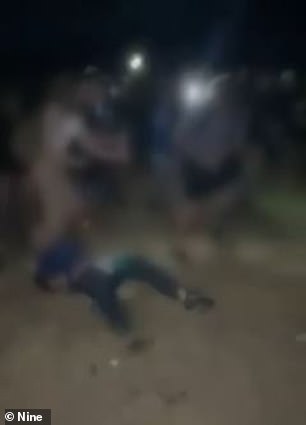 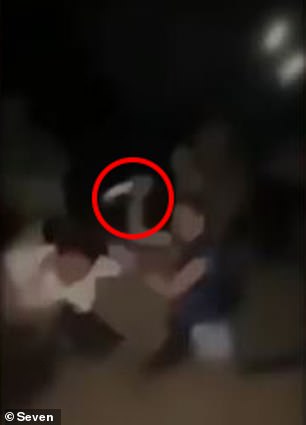 Footage shows a 16-year-old in a white shirt and a backpack fighting with another male in dark clothing brandishing a knife at Murray’s Beach in Sawtell on the NSW North Coast, with over 100 other teens at the illegal beach party watching on in horror

‘I would caution anyone who is sent the video to not watch it,’ said Nationals state MP for Coffs Harbour, Gurmesh Singh.

‘There are going to be a lot of young people around who will need support after seeing those horrific scenes.’

Witnesses say a police vehicle was used to get the boy off the beach as ambulance paramedics battled to keep him alive.

Locals in Sawtell were shocked their small beachside village was overrun with teenagers on Sunday night, with some breaking into residents’ cars and reportedly vandalising property. 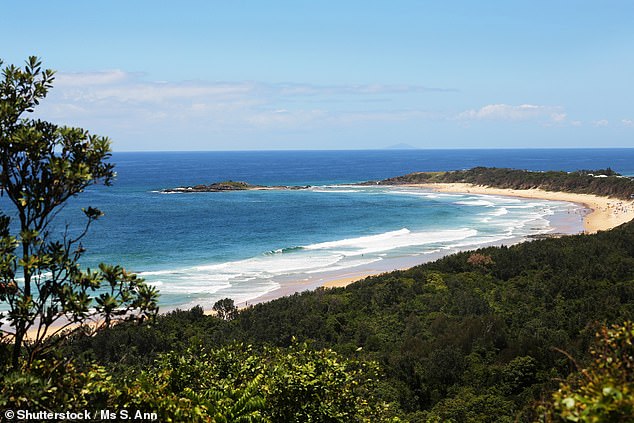 ‘Streets were crazy with kids last night!’ a local wrote on the local Sawtell Facebook group.

Another added: ‘They put a hole in the car park fence at the pub, ripped out a no stopping sign from the ground and looked like they tried to break into the bottle shop too.’

‘It’s utterly disgusting and scary having kids these days,’ a third said. ‘Stabbing other people and others filming it and sending it through social media.’

The teenager was refused bail and will appear before a children’s court on Wednesday.