Teenage boy, 17, is stabbed ‘six times’ while on a bus in north-west London

Teenage boy, 17, is stabbed ‘six times’ while on a bus in north-west London as police launch hunt for knifeman

A teenage boy has been stabbed on a bus in London and becomes the latest victim of a bloody blade crisis which continues to haunt the capital.

Police and ambulance crews swooped in on the vehicle in Cricklewood, north-west London, this evening to find a supposed 17-year-old boy with stab wounds.

A witness claimed that the victim was chased on to the bus by two males in helmets, one of whom was ‘wielding a long knife’.

He was rushed to a hospital in central London where his condition remains unknown.

Images from the supposed scene have been shared on social media after police and ambulance crews swooped in on the vehicle on Cricklewood Lane, north London

And unconfirmed reports from Cricklewood Lane suggest that the teenager was stabbed six times.

Officers have not arrested anyone but the area remains cordoned off in a crime scene.

A Metropolitan Police spokesperson said: ‘Police were called at approximately 17.30 on Saturday, 27 April to reports of a stabbing on a bus in Cricklewood Lane, near the junction with Cricklewood Broadway, NW2. 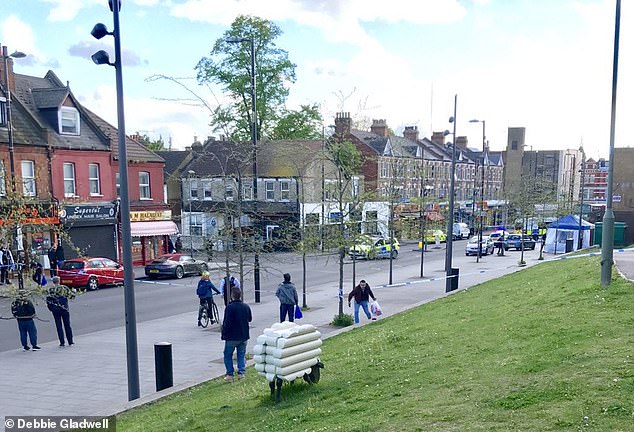 ‘He has been taken to a central London hospital for treatment – condition awaits.

‘Enquiries into the circumstances are ongoing. No arrests have been made and a crime scene remains in place at the scene.

‘Anyone with information is asked to contact officers from the North West Command Unit on 101 and quote CAD 5859/27Apr or call Crimestoppers anonymously on 0800 555 111.’

Transport for London has said that several bus routes have also been diverted because of the ongoing police cordon.