A 14-year-old girl had to be rescued by firefighters after she got stuck in a baby swing while making a video for TikTok.

Layani Maclean covered her face with her hands in embarrassment when the emergency workers arrived to free her from the playground.

She had already been trapped in the swing in Faringdon, Oxfordshire, for 90 minutes with her mother and a neighbour using washing up liquid to try and get her out.

As firefighters worked to free her Layani’s mother Charlie, 40, confessed: ‘I did this when I was her age. I was stuck in one and I got cut out.’

This is the moment a 14-year-old girl had to be rescued by firefighters after she got stuck in a swing in Faringdon, Oxfordshire 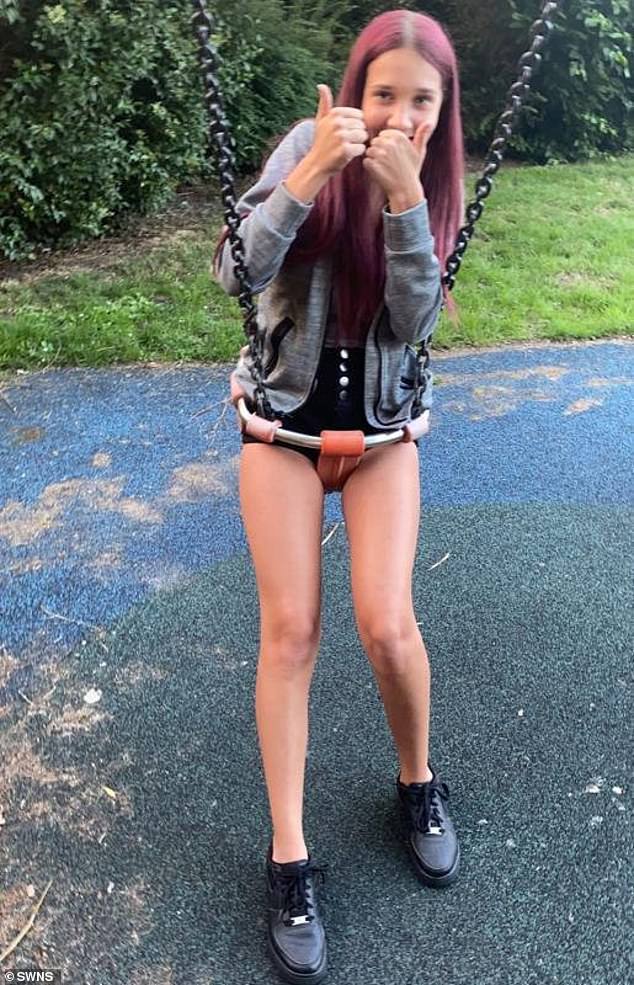 The teenager has been in the park taking turns with friends to get into the swing, meant for children between six months and four years old, for a TikTok video.

In the video her mother and a neighbour can be heard stifling giggles.

One of them says: ‘And this, children, is why we don’t mess around in baby swings.’

When firefighters arrive, one of the women tells Layani: ‘Don’t worry, if you’re not very famous on TikTok you will be in the fire station.’

The firefighters unscrew the swing’s chains and try to ease the swing down from the teenager’s waist, but it is stuck fast.

They then pour washing up liquid onto her legs and the swing before wiggling it until it eventually comes free.

Afterwards Layani’s mother Charlie said: ‘It was a really bizarre situation to walk into.

‘When my neighbour called to tell me I just started laughing, but when I arrived it was clear it was a bit more serious than I initially thought. 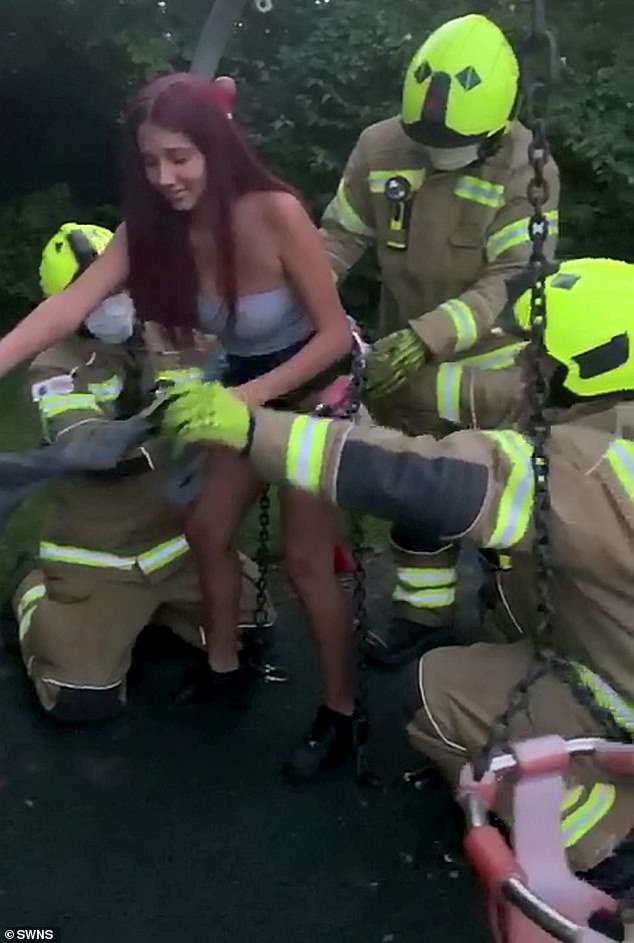 After her mother Charlie, 40, and neighbour failed to free her the fire brigade was called 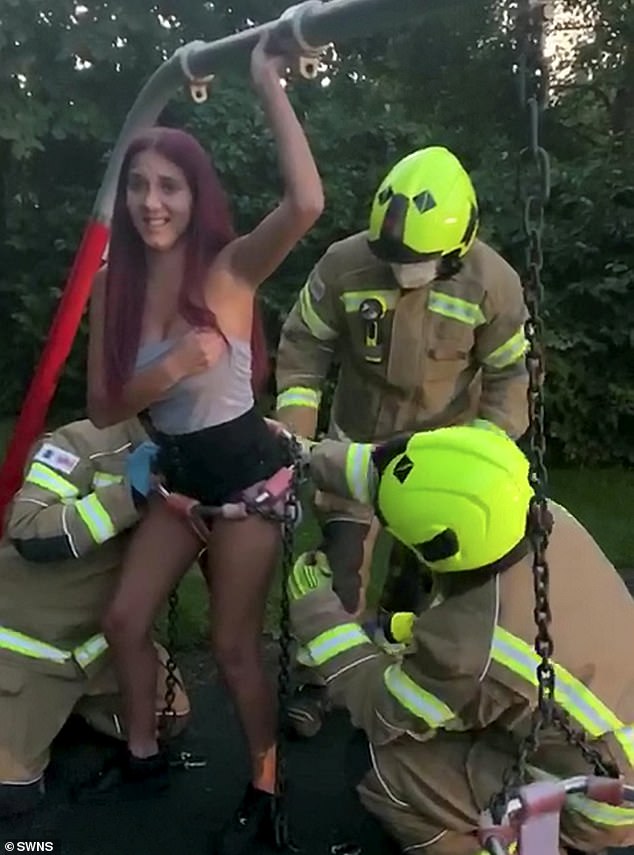 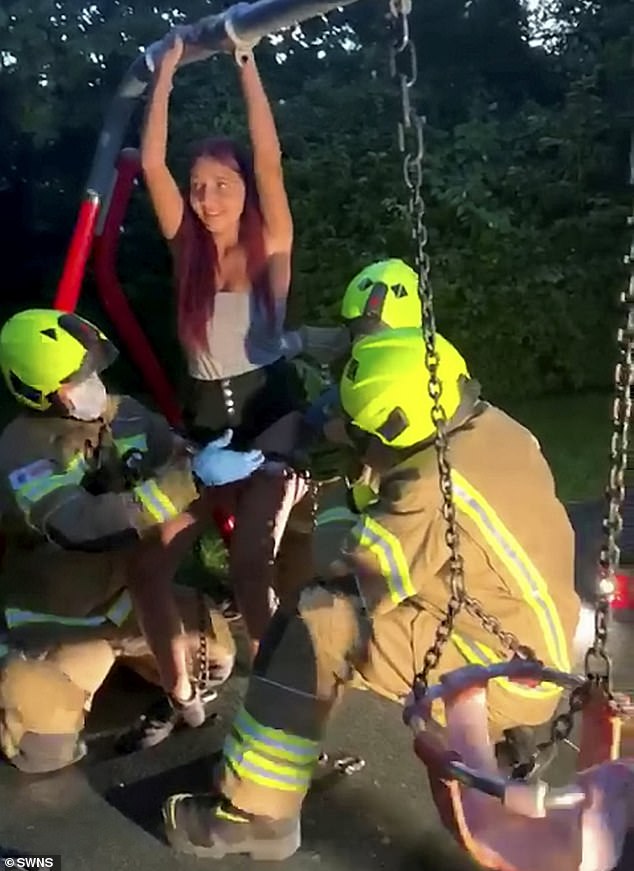 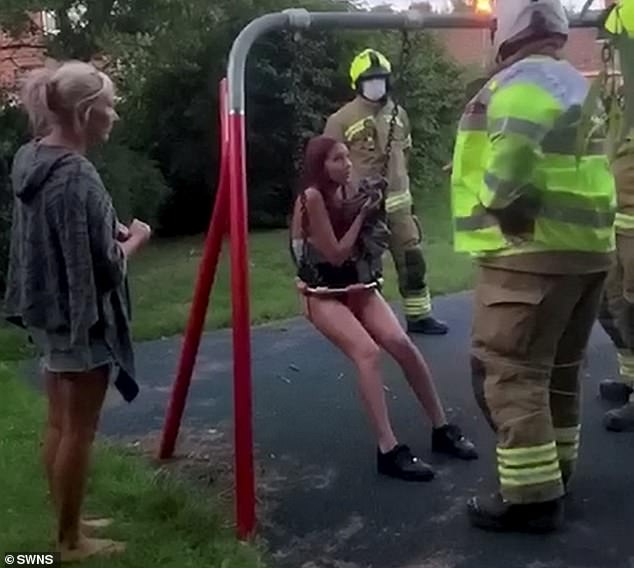 ‘My daughter was really embarrassed when we had to call the firefighters, but when they arrived they were amazing.

‘They did a great job, whilst cracking all the possible swing jokes they could think of.

‘This definitely wasn’t the first job they’d been to like that and they assured both me and my daughter that it wouldn’t be their last.

‘We’re in the middle of baking them a cake now to say thank you.’