Two teenage girls, aged 16 and 18, ‘are shot dead by family members’ in a so-called honour killing in Pakistan after video surfaced showing them with a young man

Two men shot dead two teenage girls in an ‘honour-killing’ because they appeared in a video that showed them with a young man.

Police have arrested two men on suspicion of their involvement in murdering the two girls, aged 16 and 18, at the border village, Shaam Plain Garyom, on the boundary of North and South Waziristan in Khyber Pakhtunkhwa.

One man is the father of one of the victims and the second man is the brother of the other young girl.

An ‘honour killing’ is when someone murders their own family member because they have been perceived to bring dishonour to the family name.

Two teenage girls, aged 16 and 18, were shot by their own family members in an ‘honour-killing’ in a rural Pakistani village. Pictured: Pakistani human rights activists shouting slogans during a protest in Karachi over honour killing in 2008.

The suspects said the victims were killed and buried in their native village, a Razmak police official told the Pakistani daily newspaper Dawn.

‘Initial investigations show that the suspects opened fire on the victims over the video scandal,’ he said.

The video that they were ‘honour-killed’ for showed a young man recording himself with them and another girl in a secluded area.

Police are investigating to try and find the third girl the young man who were also in the video to make sure they are safe.

The video was shot over a year ago but resurfaced on social media a few weeks ago before the murder took place on Thursday, police said. 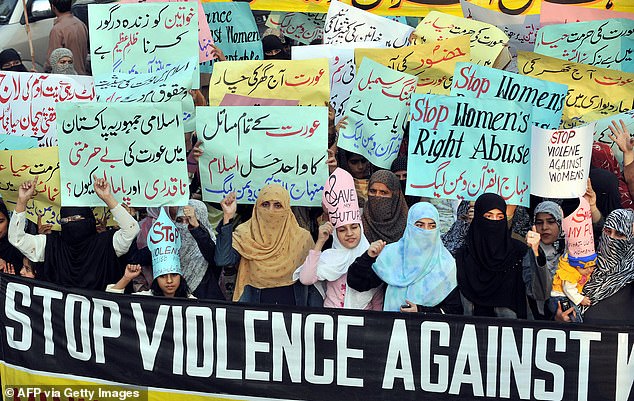 The video that they were ‘honour-killed’ for showed a young man recording himself with them and another girl in a secluded area. Pictured: An Islamic Organisation protest against ‘honour killings’ of women in Lahore on November 21, 2008

‘At the moment, our topmost priority is to secure the life of the third girl and the man before taking any action,’ the officer said.

It is mostly women and girls who fall victim to honour killings in Pakistan, according to Amnesty International.

Pakistani activists estimate that between 900 and 1000 women and girls are murdered in ‘honour-killings’ each year.

Along with ‘honour-killings’ the country grapples with rape, acid attacks, domestic violence and forced marriage.