As he flicks from one faded photograph to the next, Adrian Goodyear’s journey back to his schooldays is laced with a familiar poignancy.

There is laughter about shared jokes, shock at the sight of a long-forgotten face. But there are none of the usual ‘whatever happened to’ questions.

Almost all the dozens of photographs Adrian, 47, has catalogued from his youth show the faces of schoolfriends who have died, most before they were 30 years old.

‘I stopped going to funerals when it reached 20. I stopped counting when it got to 40,’ says Adrian, known as Ade.

Ade, you see, was at a boarding school at the centre of the tainted blood scandal, an NHS atrocity in which some 30,000 patients are said to have been given unsafe blood products in the Seventies and Eighties, exposing them to diseases including hepatitis C and HIV.

At least 2,500 are thought to have since died — and 73 of them were haemophiliac students at Treloar College, in Hampshire.

A specialist boarding school for disabled children, Treloar was in many ways an idyllic place; within the grounds was an NHS treatment centre for haemophilia, a genetic disorder that prevents blood clotting, rendering even the most trivial bump potentially fatal.

For a decade from 1975, 89 boys with haemophilia attended the school. Yet tragically, all of them were infected with hepatitis B and C — and 64, including Ade, contracted HIV. Only 16 former pupils survive.

But that was not the only scandal that affected the boys from Treloar.

After their HIV diagnosis in the Eighties, the boys — like thousands of other people given tainted blood — were offered a deal: sign a contract waiving their rights to take further legal action and they would receive a cash sum (not compensation, as that would require some acceptance of liability).

But the deal had a sting in its tail: those affected were yet to be diagnosed with hepatitis C, a potentially fatal liver virus known as ‘the silent killer’ because it can lie undetected for so long.

The Mail revealed yesterday that the Department of Health had been aware of that fact for two years when contracts were signed in 1991. Nevertheless, it went ahead, with the victims receiving £24,000 each. 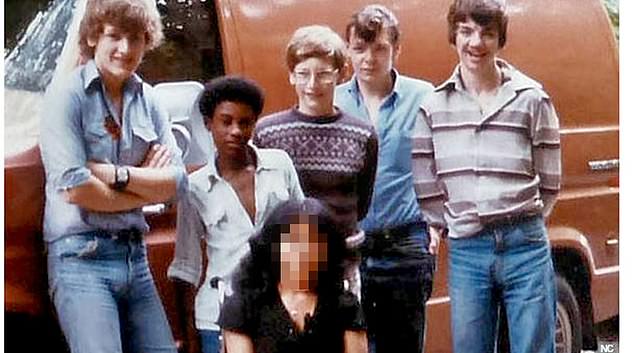 NHS atrocity in which some 30,000 patients are said to have been given unsafe blood products in the Seventies and Eighties struck down four of these five pupils

Today, Ade, who was infected with both diseases, rues his decision to sign.

‘I waited until the last minute,’ he says. ‘The deal only worked if we all signed as a group, but even then we suspected there could be more to come, that the blood could have been contaminated with other diseases.

The problem lay in the very treatment that had revolutionised the boys’ lives: injections of mass-produced Factor VIII, a blood product essential for clotting, which replaced older treatments that had required hours in hospital attached to a drip.

British laboratories couldn’t keep up with demand for the breakthrough treatment and in 1973 the government started importing cheap blood products from America.

But the system was flawed. In the UK blood donation has always been voluntary, but in the U.S. donors could accept money, leading to the creation of so-called ‘skid row’ clinics frequented by drug addicts and prostitutes — the highest-risk donors.

Because a single batch of Factor VIII could contain blood from thousands of donors, just one infected donor could contaminate the entire batch.

Victims now know that infected blood products continued to be imported and used for years after alarm bells were first raised.

By death toll alone, it is the biggest man-made disaster in postwar British history.

For the Treloar boys, treatable hepatitis B came first. Aged ten, 11 and 12, they just took their treatment and ‘got on with it’.

Newspaper headlines in 1983 first sparked fears among the students about a new disease: HIV and Aids. ‘We started asking questions,’ says Ade, at his home in Alton, a short drive from his old school. ‘We were told not to worry.’

But one day in late spring 1985, after home economics and before science, the haemophiliac boys were called to the medical centre in groups of five. 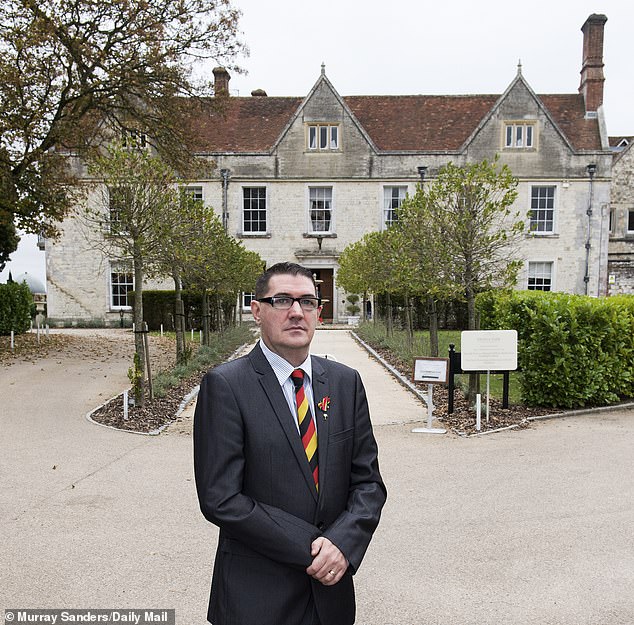 Adrian Goodyear outside the school at the centre of the scan

‘You may have heard that the blood isn’t as safe as it should be,’ began the conversation.

Medical staff had spent two weeks debating how to deliver the news and struggled with their own tears as the boys were told one by one (Ade remembers this happening in front of the group), ‘you have it’ or ‘you don’t’.

‘Someone asked how long we had to live and they gave us between two and three years, but said they would do their best to keep us alive,’ says Ade, who was then just 14.

Three in Ade’s group had HIV, two didn’t — but later discovered they had hepatitis C. All of them except Ade are now dead.

‘As soon as I heard the word HIV, I looked at the blinds. The sunlight came through and I thought “I’m dead, we’re dead, how many more sunrises am I going to see?”’

By the time Ade left school in 1989, solicitors had approached the victims and were fighting for a deal. It came in 1991 — with stringent conditions. Everyone had to sign, victims waived the right to take further action and the government accepted no liability.

Ade, who had been watching friends fall ill and die around him, says: ‘I can still remember being in the solicitor’s office in London. I was with a friend and we weren’t going to sign, but we were told there was no choice.’

Just three months later, having been given £23,500, he was diagnosed with hepatitis C.

‘At first it did seem an awful lot of money,’ says Ade ruefully. ‘But it only took a year for the realisation to dawn that I couldn’t get a mortgage, I couldn’t get insurance to travel for work (he gave up his job in the music industry in 1995). I remember thinking, how am I going to pay for my funeral?’

It was only when documents relating to the scandal were leaked several years ago that Ade discovered the truth.

‘They knew,’ he says. ‘They knew what we’d got when we signed and that just compounds everything.’ Some victims never learned how deep the betrayal ran. ‘We had a reunion in 1992 and by then two of the five I was in the room with in 1985 were really sick. Over a few months around Christmas 1993, we lost seven. You’d see them getting skinnier and if they went yellow, you knew it was Aids.’

The stigma was appalling. ‘I know several parents who say their boys died of cancer, even today,’ he says.

The advent of new antiretroviral drugs in 1997 transformed things. But Ade’s older brothers, who did not go to Treloar but were also haemophiliac, weren’t so lucky — Jason died in 1997 of Aids, Gary in 2015 of hepatitis C.

Ade is still ill, forever battling the side-effects of drugs he has to take on top of his regular bleeds.

It’s the same for Nick Sainsbury, who went to Treloar from 1974, aged ten, to 1980, having been sent there from his home in Hull.

When he left Treloar he worked as a civil servant and, like Ade, avoided relationships because of fear. He learned he had HIV during a hospital appointment in 1986. ‘It was the time of the Aids “tombstone advert”. I was told I had two years to live,’ he says.

Little wonder that Nick, too, signed the 1991 waiver. ‘I went to a meeting in Sheffield with a friend and we were told that was all we were going to get, and that if we didn’t sign we would be responsible for everyone else not getting it. It felt like blackmail.’

In 1993 Nick learned that he also had hepatitis C.

‘Knowing what we know now, it feels like they were trying to get rid of us on the cheap,’ he says.

‘Back then I didn’t think I had long to live. Some people just spent the money, they didn’t think they would be around for long.’

Nick looks at a photograph taken on a school trip to Canada, on his 16th birthday. Of the five boys pictured, only Nick is still alive.

‘That makes me feel dreadful,’ he says, tears welling in his eyes. ‘This happened at school, where we were supposed to be safe.’

Indeed, the boys should have been safe. As far back as the Seventies, the danger of pooled blood products from abroad was acknowledged by politicians. But by 1980 Britain was importing twice the amount of blood products it produced.

In some parts of the country, it was years before tainted blood was off the shelves.

Back in Alton, Ade says: ‘Who do I blame? I blame Whitehall.’