A college student has gone viral for getting revenge on his friend who sneaked the word f*** into his coursework.

Darryl Docherty, 19, luckily managed to spot the sabotage and removed the offending word before submitting it.

So he decided to get his own back by tricking his friend Lee McLeish into pretending that the joke had cost him a place at university.

And he got him to write a grovelling explanation and apology to his tutor at Clyde College, Glasgow.

Darryl then placed the funny exchanges on social media where they have been retweeted and shared thousands of times.

The health, fitness and exercise student captioned the post about Lee McLeish: ‘When your pal f***s with your graded unit [coursework] thinking he’s bold but you’re bolder.’

The first message, from Darryl to Lee, reads: ‘Here see when I took my laptop to yours did anyone type ‘f***’ into my graded unit? I’ve legit went from a B to a C because of it.’

Lee, who goes to Kelvin College, Glasgow, immediately owned up to it and when Darryl says he got five marks off for ‘immature vocabulary’. 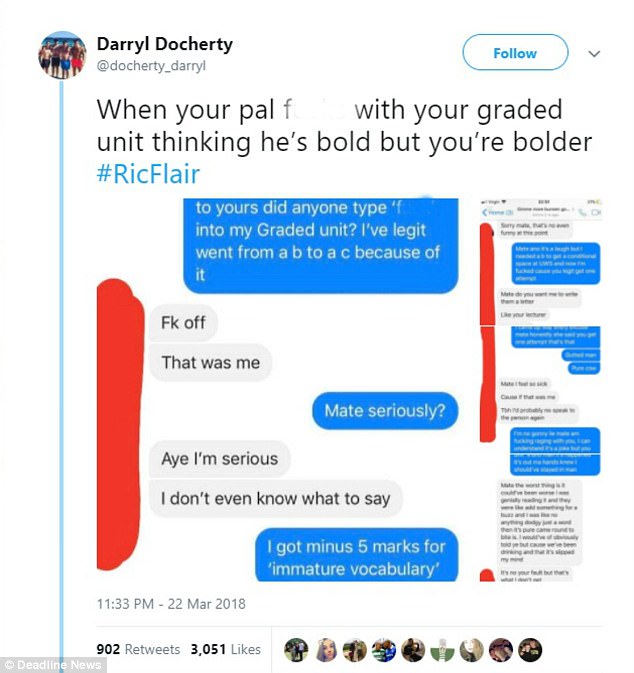 He then apologises, admits he is a ‘d**k’ and that it’s ‘no even funny at this point.’

Darryl then told him: ‘Mate I know it’s a laugh but I needed a B to get a conditional space at UWS [University of the West of Scotland] and now I’m f****d because you legit get one attempt.’

Lee then offers to contact the lecturer but Darryl plays down the chances of the decision being reversed because she had told him he should have checked over the work.

The guilt was so much that he admitted to feeling sick and admitted that if the shoe was on the other foot he wouldn’t want to speak to the person ever again.

Darryl keeps on: ‘I’m no gonna lie mate I’m f*****g raging with you. I can understand it’s a joke but you should have at least told me a day later to have a look at it or pop up and say something like ‘see something funny in your graded unit’.’

The prankster then asked for the lecturer’s email, so Daryll then gave a bogus address. It meant that any message from Lee would go to Darryl rather than his tutor. 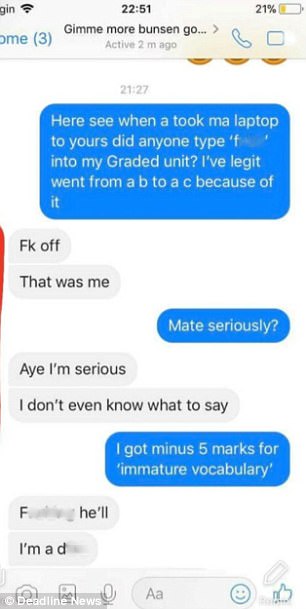 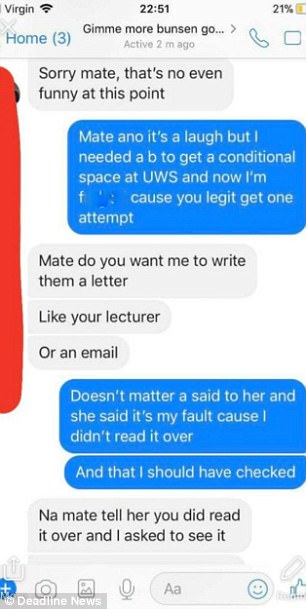 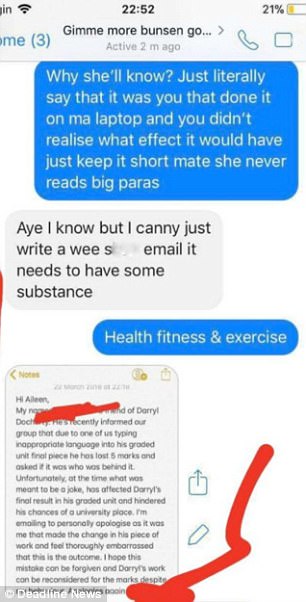 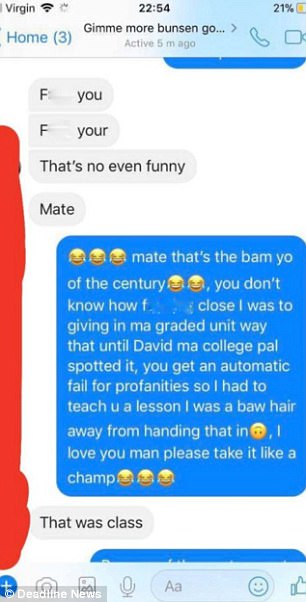 Darryl eventually managed to get his friend to write an email to his tutor, and he posted the email online (left) He eventually revealed it was all a trick, and Lee was not amused (right)

His grovelling email contains an admission he was behind the ‘inappropriate language’ which has ‘hindered Darryl’s chances of a university place’.

And he tells him that he was ‘thoroughly embarrassed and asks that ‘this mistake can be forgiven and Darryl’s work can be reconsidered for the marks despite my behaviour’.

Darryl finally decides enough is enough and tells Lee: ‘You have been done by the boldest.’ He also attaches a photo of himself holding up his middle finger.

Lee then fails to see the funny side and responds: ‘F*** you. That’s no even funny mate.’ 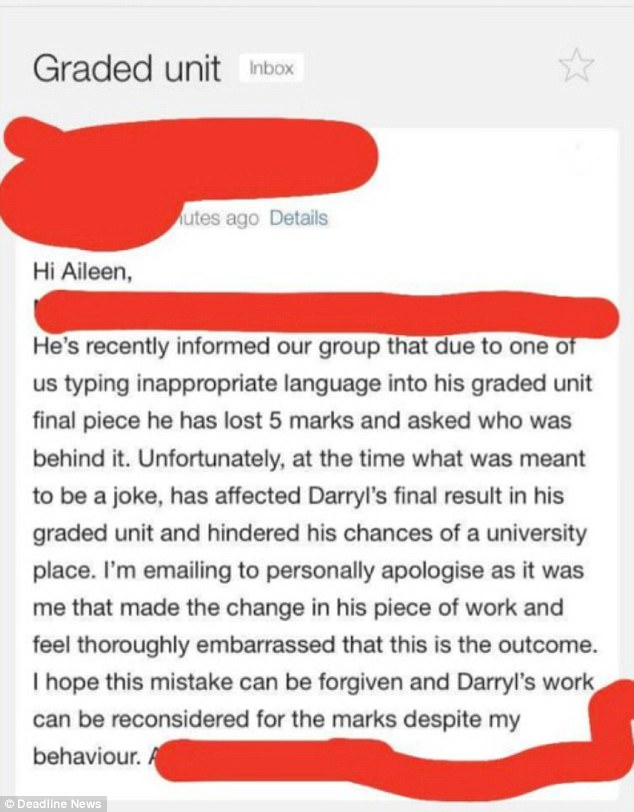 Darryl was a student at Clyde College (pictured)

But after he was given a chance to calm down, he later admitted: ‘That’s class.’

After the prank went viral on social media Laura Clark said: ‘This is hilarious but also look at the appeal email his pal sent, it’s so sincere, he really tried.’

Darryl said: ‘Lee’s a full time student also like me so he knows how important a graded unit is which made the prank even better.

‘He took the prank well as he understood that I had reason to do it, it was really a little bit of karma.’