A teenage trespasser who ran onto Eurostar train tracks causing £1.3million in lost revenue before asking police, ‘Will I be on the news?’ has been jailed for a year.

Joel Khonde caused what a judge described as ‘absolute turmoil’ to rail passengers as he fled a suspected burglary at his grandmother’s home in Northfleet, Kent, on May 29 this year.

With police hot on his tracks, the 19-year-old dashed onto the high speed line at nearby Ebbsfleet International station.

Joel Khonde caused what a judge described as ‘absolute turmoil’ to rail passengers as he fled a suspected burglary at his grandmother’s home in Northfleet, Kent, on May 29 this year. Pictured: A photo of the disruption at St Pancras on that day

He then ran along the track before disappearing into a tunnel linking Kent to Essex and taking him under the River Thames.

But a court heard it took almost four hours to apprehend him, reportedly with the assistance of a police helicopter.

It was then a further hour before Eurostar and Southeastern high speed train services in and out of London’s St Pancras International could be resumed.

In that time the total economic loss had amounted to a staggering £1,260,205. This was made worst by floods and lightning that struck the same day.

Maidstone Crown Court in Kent heard 70 journeys were delayed by a total of 3,718 minutes, with 10% of services cancelled.

More than 1,000 passengers were stranded on trains for two hours, with those at St Pancras stuck for four hours and requiring the assistance of British Transport Police when rail staff were subjected to abuse.

The financial impact to Southeastern in terms of repayment to 5,026 commuters who claimed through the ‘Delay Repay’ scheme was £47,890.

The court heard that when he was eventually arrested Khonde, then aged 18, asked officers: ‘Is it going to be on the news? I’ve stopped the Eurostar and everything.’

But despite the major disruption caused and resulting financial bill, Judge Philip Statman said Khonde had already been sufficiently punished by being on remand since his arrest and serving the equivalent of 14 months’ custody.

The sentence he imposed yesterday meant the teenager, who admitted obstructing an engine or carriage by trespassing on railway tracks, was immediately released.

Describing Khonde, who suffers from ADHD, as intelligent, Judge Statman said: ‘The result of your obstruction was that substantial delays were caused.

‘The rail system was in absolute turmoil….and you will appreciate no doubt that this makes the offence extremely serious.

‘But I am satisfied that you did not set out to cause that level of disruption. Had I been of a different view the sentence would have had to reflect that and would have been very long indeed.

‘You have been in custody for the equivalent of a 14-month sentence. What you have served already is sufficient punishment.’ 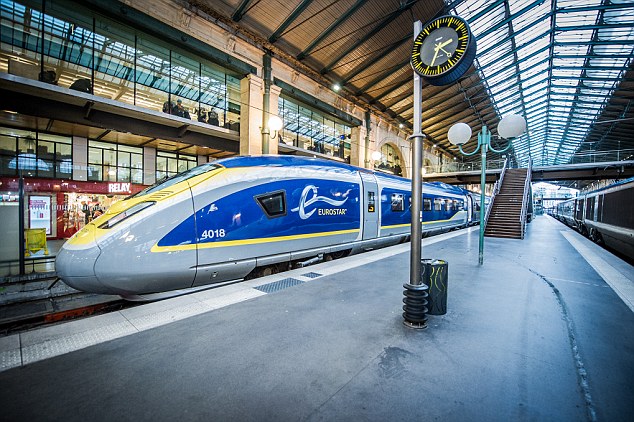 The court heard that when he was eventually arrested Khonde, then aged 18, asked officers: ‘Is it going to be on the news? I’ve stopped the Eurostar and everything.’ Pictured: File photo of a Eurostar train at St Pancras

The court heard Khonde jumped onto the tracks at Ebbsfleet at 5pm, having telephoned an aunt to threaten he would ‘burn out’ his grandmother’s home in nearby Bankside.

He believed she had ‘shopped him’ to police for an unrelated matter.

A train full of passengers was waiting to leave but when the teenager saw police he ran towards the Kent portal tunnel.

Khonde, of Tottenham, north London, tried to climb a fence and threw stones at chasing officers before continuing into the tunnel on the London-bound track.

He was finally arrested on the Essex side of the high speed line at 8.50pm.

Many passengers took to social media to express their anger and frustration at the disruption, with commuter Mary Laws tweeting ‘Today’s delay is brought to you via a trespasser on the track at Ebbsfleet.

‘They lost him in the tunnel so have dispatched the helicopter. I wish that was a joke. Genius’

Khonde, who suffers from ADHD, was also charged with burglary and destroying property but was found not guilty during a trial in October.

The teen was also cleared of destroying property but convicted of threatening to destroy property and theft, for which he received concurrent custodial sentences of eight months and one month respectively.