Teenager, 17, risks his life by hanging off 44-storey building using only three fingers

A 17-year-old daredevil was filmed hanging from a towering building with just three fingers in the ultimate death-defying stunt.

The stuntman, who goes by the performance name of The Little Nuisance, took to the 44-storey Anaconda Cut building in Salford, Manchester, which stands at 430 feet, to carry out the heart-pounding rooftop stunt on April 20.

Viewers were left watching in awe as the teenager gained access to the top of one of the city’s newest buildings and went on to hang from its side.

Speaking to MailOnline, the young stuntman, who wished to remain anonymous, said he refused to let fear get to him as he climbed the UK’s second tallest tower.

The 17-year-old daredevil, who goes by the name of The Little Nuisance, hangs from the 44-storey Anaconda Cut building in Manchester 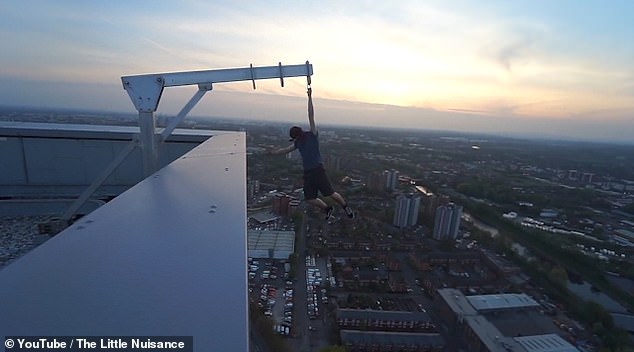 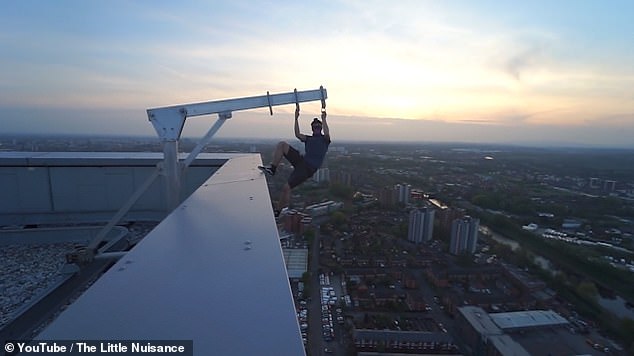 Describing the moment that he was left hanging from the towering building the teenager, who posts his stunts on his Instagram page, said: ‘I was just enjoying myself and not thinking about it too much. Just enjoying life really.

‘I’m not fearful of performing the stunts. It’s hard to explain but I’m just focusing on the present moment and not thinking about it too much.

‘The first time I hanged off the building it was for about ten seconds and then that grew to about 15-20 seconds for my second attempt.

‘I hanged off the building with two hands at first but then on my third attempt it was with just one hand.’

The stuntman and his three friends first ventured to the top of the building, which was formerly the Greengate 100 building, during broad daylight.

The gleaming building has since seen around 20 people move into its 349 luxury apartments. 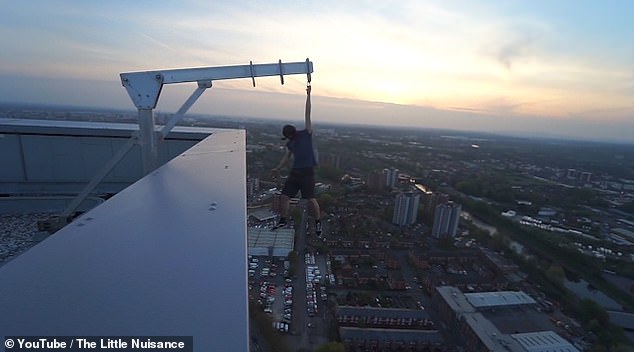 The daredevil uses one hand to hang from the 44-storey building in Salford, Manchester 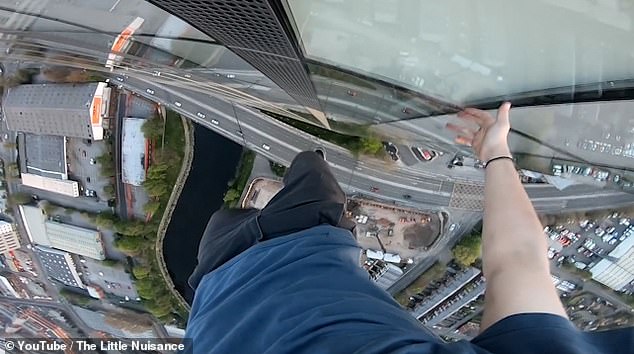 The young daredevil said: ‘When the building was first finished we went onto the roof and decided to put up an abseil post.

‘I spoke to my friend and we put a caribener on top of the roof.

‘We’ve been on the roof about four times now and the first time we went up there it was daylight.

‘The reason I only hanged with three fingers was because that was all the fingers the caribener would allow me to put through.’

Later on YouTube the stuntman wrote: ‘I know it’s 44 floors, but I already made the thumbnail and can’t be f***** changing it, so whatever. 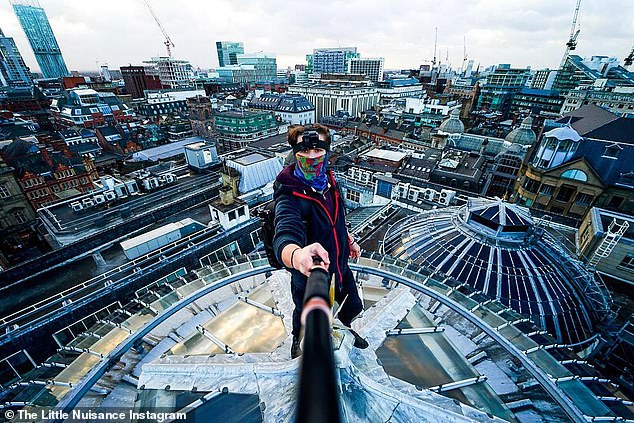 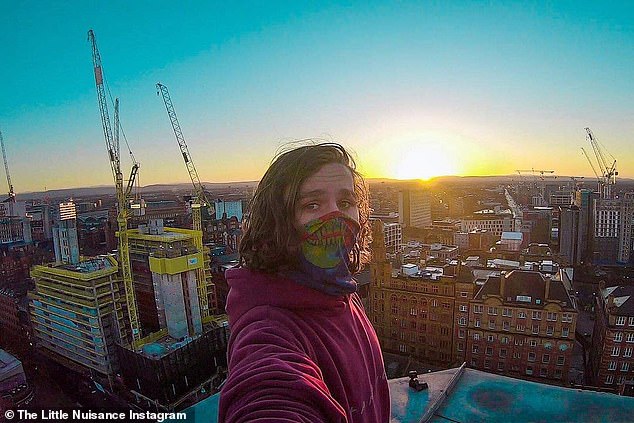 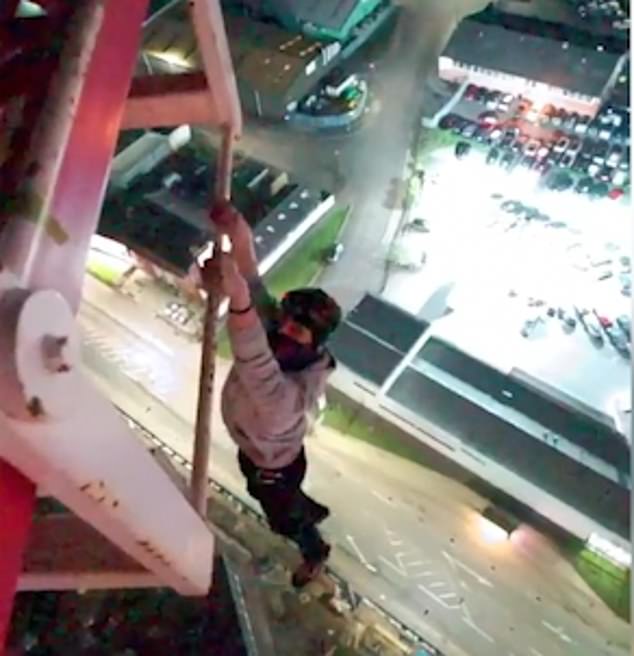 The thrill-seeker hangs from the top of a crane in Salford, near Cornbrook Tram Stop, in another death-defying stunt

‘Yeah, hung off the side of this building with 3 fingers, bit stupid really but oh well. Enjoy.’

The young adrenaline junkie, who one day hopes to become a climbing or skydiving instructor, now has his horizons set on another tall building. 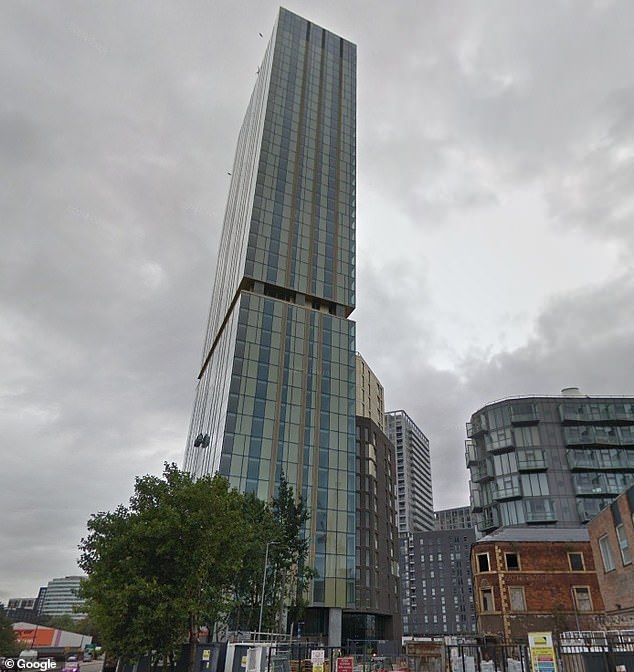 He said: ‘I have been climbing for a while but I got into rooftop hanging about six months ago.

‘I next want to hang from anything that is high enough.’

The towering building, which took two-and-a-half years to build, was designed by OMI Architects, and is the second tallest tower in the UK after South London’s 45-storey UNCLE building.