Teenager, 18, fights for life after being shot in the back in car on busy Birmingham street

A teenager is in a serious condition after being shot in the back as he sat in the front passenger seat of a car in Birmingham.

The 18-year-old was taken to hospital in a serious condition after the attack, which occurred around 11.10pm last night, in the busy Sladefield Road, Alum Rock.

A shocking video shows the teenager slumped in the silver car, which has three bullet holes in the front passenger window –  as he appears to be assisted by passers-by. 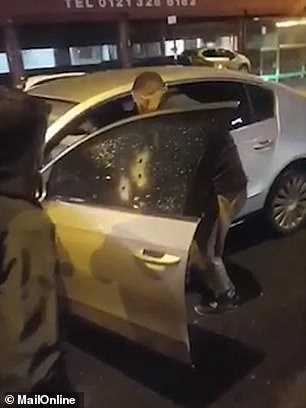 An 18-year-old was taken to hospital in a serious condition after being shot in the back while sat in a car in  Birmingham. A shocking video shows the teenager slumped in the front passenger seat of the car, which has three bullet holes in its window, as he appears to be treated by passers-by

Footage also shows a crowd of people stood around the car, which had its boot open, and filming the man on their mobile phones.

No arrests have been made and police are appealing for witnesses.

West Midland Police said in a statement: ‘Police were called to reports of a shooting in Sladefield Road, Alum Rock, at around 11.10pm last night (Wednesday 28 November).

‘A man, believed to be aged 18, was taken to hospital in a serious condition after suffering a gunshot wound to the back.

‘The area has been cordoned off while enquiries continue.

Several video clips of the incident have been posted online.

One shows an armed police officer patroling around the vehicle.

In another clip, those at the scene are heard shouting ‘call an ambulance’.

West Midlands Ambulance Service received a call saying they received a report about the incident but could not find a patient. 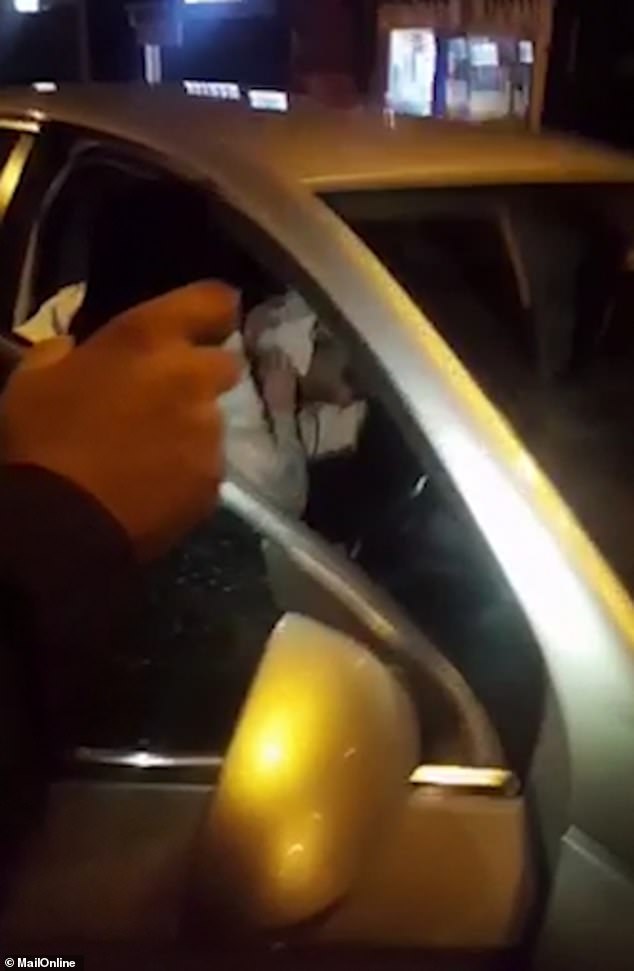 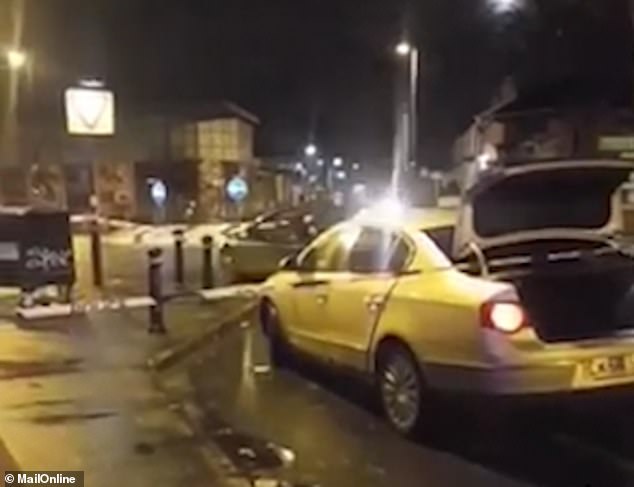 No reports of any arrests have been made and police appealed for witnesses.

They were then called to Heartlands Hospital where they transferred a patient to another hospital for ‘specialist treatment’.

A spokesman said: ‘We were called to Pelham Road, Alum Rock at 11.10pm to reports of an assault. We dispatched a paramedic officer and an ambulance but there was no patient.

In the video, one man is heard shouting: ‘We were just by the shop when he was shot. He looks rough.’

Another man opens up the car door and can be seen pressing tissues against the boy’s neck as he sits motionless with his head slumped forward.

Birmingham Live reported, an eyewitness who arrived at the scene after the shooting said: ‘There was a Volkswagen Passat.

‘He was shot in the passenger side and there were three bullet holes through the window. ‘There was a big Police Incident Unit and the armed response were there.

‘The Passat was initially uncovered and then covered with a large plastic blue sheet.

‘The officers came out of the Police Incident unit with cameras and tripods.

‘The eyewitness said it was quiet at first but then people were driving by asking what had gone on.’

Another witness said: ‘The boy got shot three times by a gunman who fired through the passenger window.

‘I heard the victim was hit in the ribs and neck and it’s looking touch and go if he’ll survive.

‘I didn’t see the shooting but people said the gunman was on foot. It’s shocking how many people are getting shot on our streets.’

The scene remained sealed off throughout Thursday morning’s rush hour, with reports of ‘crawling’ traffic in the area.

Police officers are conducting a fingertip search of the scene.

A team of specialist officers are combing the road and pavements around the car.