A teenager claims to have been mistreated for an eating disorder for nine months before it was discovered she had a rare gut condition.

Caitlin White, 19, vomits up the 30 times a day due to cyclical vomiting syndrome and severe gastroparesis – which means her stomach can’t empty itself.

She was admitted to an eating disorder clinic for nine months in 2014, despite urging doctors to believe her weight loss wasn’t on purpose.

After battling sepsis multiple times, and having her hair fall out, she said doctors finally realised she had a physical condition.

Now, Miss White weighs just six stone, is fed through a tube in her stomach and must visit hospital daily for infusions of nutrients.

Miss White, from Perth, Scotland, was recently told she was at risk or organ failure and her teeth falling out due to her severe malnourishment.

Caitlin White, 19, from Perth, Scotland, vomits up the 30 times a day due to cyclical vomiting syndrome and severe gastroparesis – which means her stomach can’t empty itself 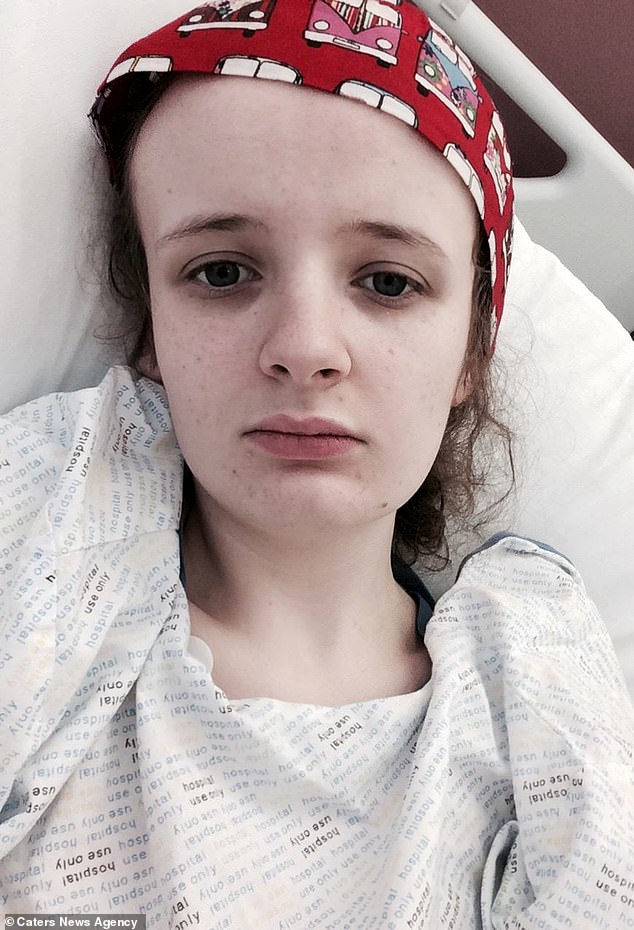 Miss White spent admitted to an eating disorder clinic at Ninewells Hospital (pictured) for nine months in 2014, despite her pleads with doctors to believe her weight loss wasn’t on purpose 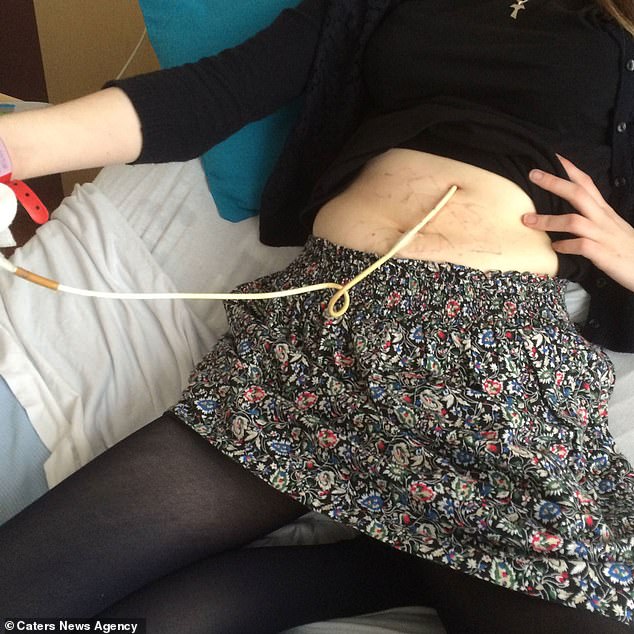 Miss White is fed through a tube in her stomach, but has been visiting hospital every day for three years to get IV drips. She is at risk of organ failure due to severe malnourishment

Miss White claims she was discharged from Ninewells, the hospital in Tayside where she was treated for an eating disorder, with no care plan in place and feels doctors are leaving her to deteriorate.

She said: ‘Life is impossible. The condition feels embarrassing, humiliating. My entire life has been left in limbo.’

WHAT IS CYCLICAL VOMITING SYNDROME?

CVS has no obvious case and is generally not the result of an infection or lifestyle choice.

It mainly affects children with symptoms often resolving by adulthood.

CVS sufferers may feel very sick and vomit for hours or even days at a time.

They will then recover and feel fine until their next episode.

An episode starts with someone sweating intensely and being unusually pale, which is followed by retching, vomiting and a sufferer being unresponsive.

Medication can ease nausea and vomiting.

If a patient becomes severely dehydrated, they may require IV fluids in hospital.

Untreated, CVS can lead to inflammation of the oesphagus lining and tooth decay.

Miss White first went to her local GP in January 2014 with acid reflux.

She had suffered from digestive problems for a long time, but says it ‘sorted itself out each time.’

Miss White said: ‘I was put on anti-sickness tablets but they didn’t work.

‘I was a sickly child, but we thought that was just the way I was – a stomach bug that wouldn’t go away.

‘Yet my weight was dropping rapidly, and I started vomiting black.

‘Straight away I was admitted to Ninewells, and I was an inpatient there for nine months.’

Miss White said she was subject to nine psychological assessments during her time there, as doctors were convinced she was lying.

She said: ‘I’ve had to undergo nine psychiatric reviews in total – all the symptoms of my illness were there but they were convinced it was psychological.

‘I was in pain, but they told me it was all in my head. I physically couldn’t eat – nothing was staying down, and I was in agony.

‘A consultant used the words phantom pain – but I knew it was very real.’

Despite her desperate plea to be listened to, when she told medics she wasn’t losing weight – or throwing up – intentionally, they continued treatment.

Miss White said: ‘The amount of times I was sick in a day wasn’t recorded. When I questioned it, I was accused of lying.

‘On one occasion, my consultant told nursing staff not to give me a feed as the line was infected. When the staff attempted to feed me, I told them this and they recorded it as me refusing food.’ 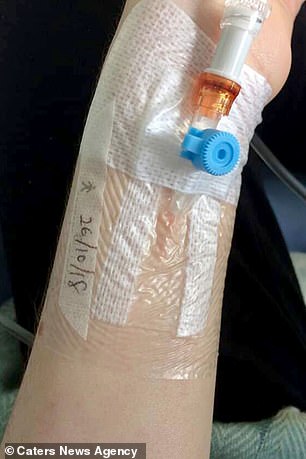 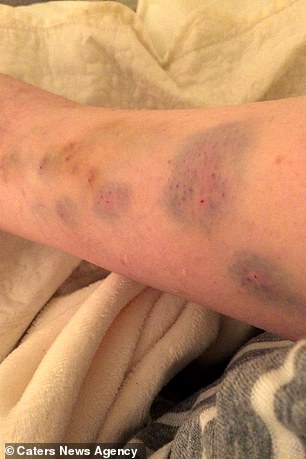 Whilst being wrongly treated for an eating disorder, Miss White’s body rejected feeding lines. They became infected, and led to sepsis on multiple occasions. She still needs IV drips now (see left), which cause bruising on her arms (see right)

Miss White’s body rejected attempts to put in feeding lines due to having a condition known as Ehlors Danlos syndrome, making her muscles abnormally slack and therefore the tubes can fall out within hours of being surgically inserted.

She often had infections from the feeding lines, which led to sepsis on more than one occasion.

But doctors allegedly wrote on her note that she was refusing feeds.

During one of her many battles with sepsis, Miss White’s hair fell out. According to her mother, Pamela Gillespie, 44, it was believed Miss White had pulled it out herself.

Ms Gillespie said: ‘We were devastated when Caitlin’s hair fell out. But doctors didn’t even believe that.

‘A family member had been through chemotherapy, and a doctor went as far as to say that Caitlin has pulled her own hair out, in an attempt to mimic her.’

Her family allege it was only when she was admitted to A&E that a consultant form Perth Royal Infirmary, Scotland, stepped in to oversee Miss White’s care.

She had been out of Ninewells for two days when she was diagnosed with her rare conditions, cyclical vomiting syndrome – which affects as little as one in every 25,000 people – and gastroparesis – which affects four per cent of people in the UK.

The former causes patients to suffer repeated vomiting and nausea episodes, and the latter affects the normal movements of muscles in the stomach, preventing it from emptying properly.

Now, with her condition fast becoming critical, her family are calling for doctors to find a way to help Miss White.

She is fed through a semi-permanent feeding tube in her stomach, which has to be changed regularly due to infections.

Fighting to get the nutrients she desperately needs, Miss White must have IV drips every day.

But in the past, doctors have had to try up to 18 times to find a vein to infuse her treatment through, which is made up of potassium, magnesium, iron and phosphate.

Miss White’s disorder causes her to suffer extreme constipation, with up to seven weeks passing between her bowel movements. As a result, a build-up of bacteria in her small intestine has ravaged her immune system. 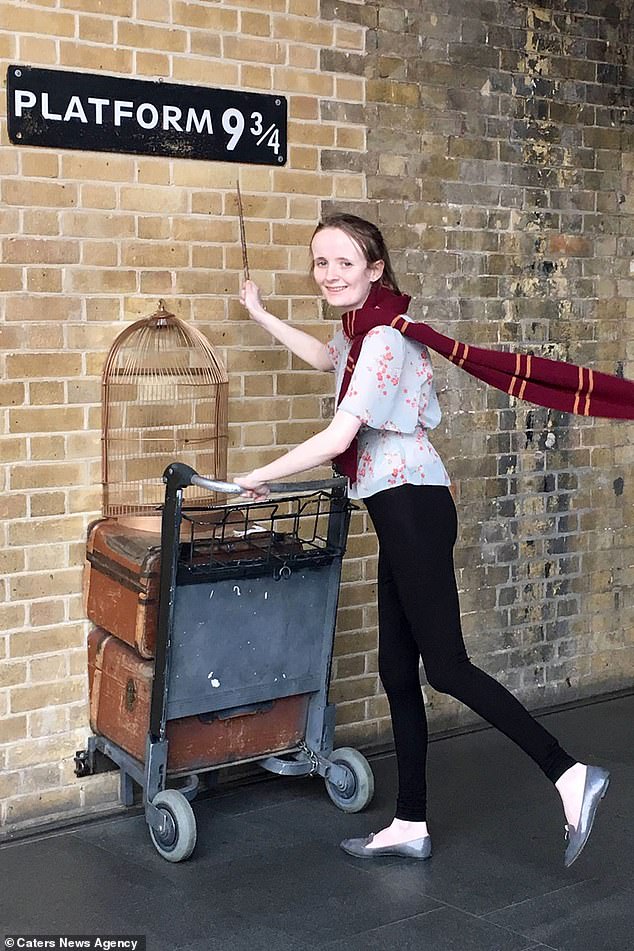 Miss White weighs just six stone, as doctors struggle to find a treatment for her condition 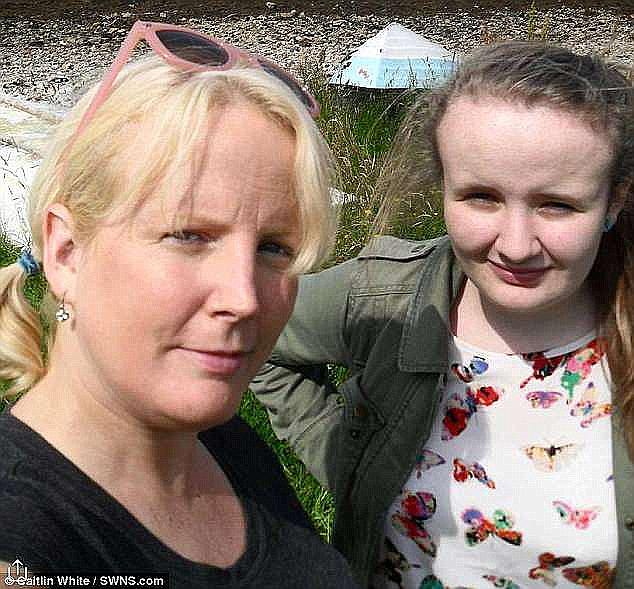 Miss White’s mother, Pamela Gillespie, 44, said it has been horrendous to ‘literally watch her daughter starve’, and is unsure what the future holds for her

Due to having critically low potassium levels and has since been told she may end up with no teeth.

The teen, who is at risk of organ failure, has been offered total parenteral nutrition (TPN) as a ‘last resort’, which delivers nutrients directly to the liver, bypassing the digestive system.

Although this would theoretically ease her vomiting, Miss White has been warned the ‘catch 22’ treatment can also cause deadly infections, as well as blood clots.

In August, the teen was told she may not be alive in six months due to the impact the illness is having on her body.

Ms Gillespie said: ‘The constant vomiting, and literally watching my daughter starve – it’s been horrendous. She’s had to fight to be believed, before she even has a chance at recovering.

‘The longer this goes on, the sicker she is going to get.’

Miss White says the state of care at Perth Royal Infirmary, where she is currently hospitalised, has been fantastic.

But the family are still unsure of what the future holds for her.

Miss White said: ‘I can go through over 300 sick bowls a week. I can’t go out with family, with friends.’

A spokesperson for NHS Tayside Trust – which oversees Ninewells Hospital – said: ‘Due to patient confidentiality we cannot comment on individual cases but we continue to be in direct contact with Ms White.’