A teenager who was among eight models viscously gang-raped by an armed gang of illegal miners in South Africa while they were shooting a music video has described the horrific attack and told how she and her sister had their virginity ‘stolen’ by the men.

Nombosino, 19, whose name has been changed, and her 21-year-old sister had accepted a £15 a day job to model in a gospel music video when they were ambushed by the gang near an abandoned gold mine close to Krugersdorp on July 28.

The teenager, who feared for her life at the hands of the heavily armed gang, told how the men raped the black and Indian women but left the three white women who were among the 22-strong production crew alone.

The models and crew, the youngest of whom was 19 and the eldest 37, were raped up to ten times each over several hours by the criminals.

Nombosino told local newspaper City Press: ‘We were excited when a local girl who runs a modelling agency told us about the photoshoot and promised us R300 each (£15) at a farm in Krugersdorp.

‘Then it was decided to shoot another part at a mine and the place was beautiful then as we were about to film the last scene men began running at us firing gunshots in the air.

‘They ordered everyone to lie down and more men came running out and they all had guns and they started searching us taking our phones and clothes and cameras.

‘During the search they began touching our private parts and one forced me into a car and that was when the first man raped me. I started bleeding as a second man came.

‘He saw the blood but raped me anyway and I asked him to tell the others not to rape me and had to lie and say I had just lost my baby as they picked is off one by one’.

Nomboniso said her sister, 21, who has not been named, was then put in the car with her.

Nomboniso said she sat on her sister’s lap to try and protect her but two men took her out the car and dragged her to a hole in the ground.

The 21-year-old sister told City Press: ‘The two men started raping me. They had guns and threatened to kill me if I didn’t do as they said. I started bleeding and that helped me.

‘It was a very traumatic experience which lasted about four hours for all the girls and one of the ladies was raped in front of us’. 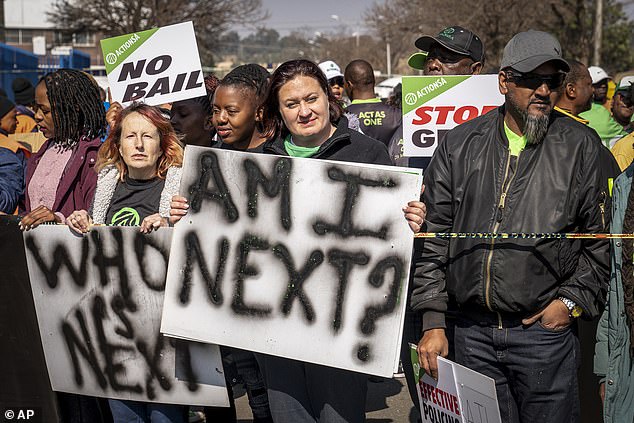 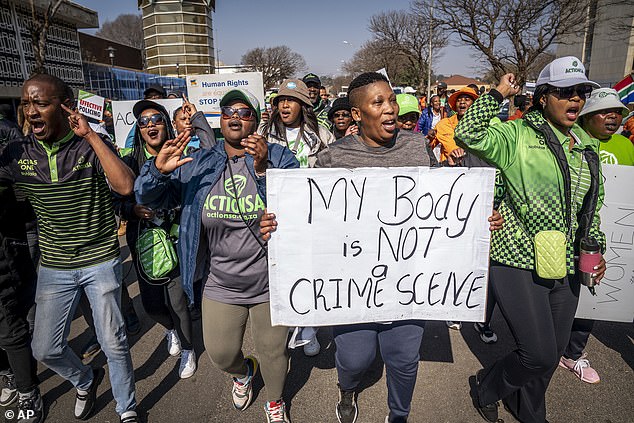 Scores of demonstrators, the majority of whom were women, were pictured marching outside the Krugersdorp courtroom yesterday evening carrying placards decrying the shocking crimes

Another victim, 18, told City Press she had taken the modelling job for £15 to buy food but was attacked at the shoot and was raped by two men who did not wear condoms.

She said she had been hiding in a tree for an hour but one of the rapists saw her and pushed her towards the other girls and was scared not knowing what was to happen.

The victim said: ‘They started picking us off one by one and took us to the nearby forest where they raped us and then four men picked me after the first two.

‘I was only saved from them because they could see I was on my time of the month’.

The three girls said that the older men in the gang were forcing the younger boys to rape them but after four hours they decided to let them all go.

The mother, 45, of the two sisters told City Press said: ‘I was so hurt when I heard. For them to have their virginity stolen by men that they didn’t know is very hurtful’.

The woman whose modelling agency organised the group of eight girls to film rising star Malvery Martin’s music video said she offered herself to the gang to save the girls.

She said: ‘The parents trust me and every time I go out they expect me to take care of their children. I was blaming myself if it wasn’t for me these girls wouldn’t be there.

‘I felt responsible and wanted to take all the pain so that they wouldn’t touch the girls.

‘The first person they raped was me and they took me into the bush and the second time to a hole where nobody could see us and the last time was in front of the group.

‘The older men kept telling the younger boys to rape us and they’d hit them and force them to do so. The young boys would then take us one by one into the bushes’.

One woman from the production crew was raped in front of the group by the gang. In all there were 12 women and 10 men involved in the day long music video shoot. The rape victims were aged between 18 and 37.

The gang also systematically robbed the crew and girls of their mobile phones, rings, jewellery, handbags, cash and cameras – worth an estimated £75,000.

The shocking crime took place while the a production team were filming out in the wilds near West Village, Krugersdorp, near Johannesburg on July 28

A group of 10 miners had heard the music as the Red Button crew filmed the gospel video and emerged from the bushes wearing balaclavas and fired into the air.

They ordered the models and crew to lie down then whistled for 10 more men who emerged and began taking the girls one by one into the bush to gang rape them.

The girls’ ordeal went on for four hours with some girls were raped up to 10 times while the men in the crew were stripped naked and held at gunpoint throughout the attack.

A huge police operation involving hundreds of armed officers, dogs, the airwing, drones and helicopters was brought in and three of the illegal miners were shot dead after firing on the officers.

The shocking crime that has rocked South Africa has sparked huge police raids against hundreds of illegal miners locally, who operate illegally and with violence.

Some 142 arrests have been made but none have been linked to the gang rapes yet but it is believed all those arrested are being DNA tested to try and link them to the rapes.

The miners have begun appearing before magistrates in Krugersdorp for illegal mining, illegal immigration, possession of explosives and firearms and attempted murder.

Police are looking for the men responsible for 32 rapes on 8 girls and armed robbery.

President Cyril Ramaphosa has ordered the Police Minister Cele to come down with an iron fist saying: ‘The perpetrators of this crime must be apprehended and dealt with.’

South Africa has the third highest rape figures in the world with 150 reported a day but it is believed with outlying villages and terrified victims the real figure is much higher.

It is believed all the rape victims will be tested for HIV and sexually transmitted diseases and are undergoing counselling and have returned to their families in Johannesburg.

DNA tests in South Africa can take up to a year but Police Minister Cele has ordered those taken from the women to be fast tracked to compare them with those arrested.

It comes as under-pressure Police Minister Bheki Cele faces calls by opposition party the Democratic Alliance for saying one victim was ‘lucky ‘ to be only raped once.

‘The 19-year-old was lucky – if it is lucky – to have been raped by one man as opposed to several men’ suggesting she was fortunate not to have been gang raped. 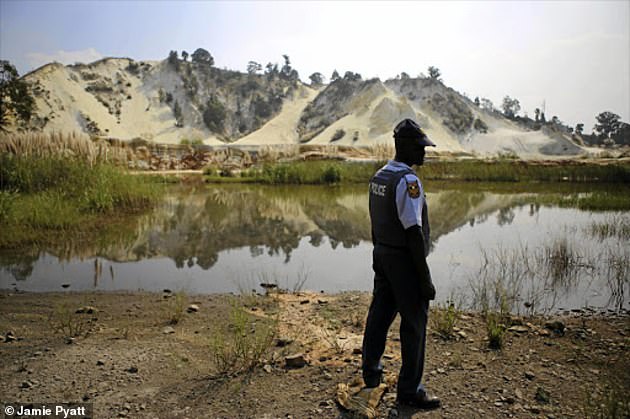 Despite qualifying the sentence with ‘if it’s lucky’ the Minister’s comment caused anger.

The DA has called for the Police Minister to be fired for his comments on live TV and launched a petition to have him removed from office for the ‘trivialising’ comment.

One SA Movement spokeswoman Mudzuli Rakhivhane said:’Is this how the police think about rape? That victims in SA are lucky when they are only raped by one person?

‘Is this the state of our nation?’.

The illegal miners – known as zama zamas – are highly dangerous illegal immigrants who venture illegally onto old closed down mines and reopen them and burrow down to try and find missed gold.

It is highly dangerous with many mine collapses but the zama zamas can make huge profits and protect their territory ruthlessly with AK47’s, machetes and hand guns.

They terrorise local villages raping and murdering at will but police have largely turned a blind eye until the mass gang rape outraged the country sparking them into action.

The gold mines date back to 1887 when a rich seam of the precious metal was struck at nearby Witwatersrand and Krugersdorp sprung up as a gold rush boom town.

The massive police operation is ongoing and it is believed the rapists and armed robbers are amongst the 142 arrested illegal miners but so far none have been identified.

A South African Police Service source said:’Normally when an illegal immigrant is found they are deported but due to the national outrage an example will have to be made.

‘The punishment should act as a deterrent to stop others crossing our borders’ he said.