Mariam Moustafa, 18, was attacked outside the Intu Victoria Centre in Nottingham on Tuesday, February 20 at around 8pm

A teenager who was left in a coma after a violent attack at the hands of group of women has died in hospital.

Mariam Moustafa, 18, of St Ann’s, Nottingham, was attacked outside the intu Victoria Centre, Nottingham, on Tuesday, February 20, at around 8pm.

Mariam, who was a Central College engineering student in Beeston, was left in an induced coma following the incident and died in Nottingham City Hospital today.

Mariam, who was studying engineering at college, ended up in a coma with a bleed on the brain on the same day she was released from hospital following the attack.

She had just been offered a place at university in London and was shopping in the city centre when she was attacked by what police describe as ‘a group of women’.

Mariam, from Nottingham, had agreed to meet her mum and sister later that evening – but she never showed up.

Her family were told about the incident and quickly made their way to the Queen’s Medical Centre.

Her parents, Mohamed Moustafa and Nessrin Shehata, were shocked to find she had been punched several times before she was later verbally assaulted after getting onto the number 27 bus.

Her sister, Mallak, 15, speaking on behalf of the family following the attack but before Mariam’s death, said: ‘We are very upset about what has happened – she is such a kind, ambitious person and one who was running after her dreams of being an engineer. 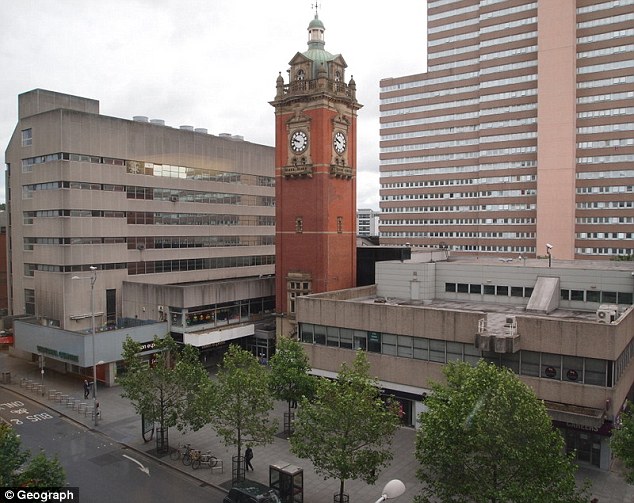 Mariam, who is studying engineering at college, was left in an induced coma after the violence last week and died early on Wednesday. Pictured: The Intu Victoria Centre in Nottingham

‘We don’t understand who would do this to her, she is very quiet and never gets involved in any problems. She was originally released from hospital on the same day and once we got her home she started to deteriorate and so she was rushed back to hospital.

‘We were told that there was a bleed on her brain and she had suffered a stroke, one side of her body is now not responding. She is now in a coma and has been in that way for a week since the night of the attack.

‘We never got to find out what happened from her because she didn’t get a chance to tell us before she fell unwell.

‘We are hoping that her brain is recovering while she is in a coma and until that happens we will continue to be by her side every day at the hospital. We are all very shocked and upset and don’t know what to do.

‘We just want those who did this to Mariam to be found as what has happened is wrong.’

A Home Office post-mortem examination is due to take place.

The police investigation is ongoing but the police have arrested a 17-year-old girl on suspicion of assault occasioning grievous bodily harm and was subsequently released on conditional bail.

Detective Chief Inspector Mat Healey, of Nottinghamshire Police, said: ‘Our thoughts are with the woman’s family who we are giving support to at this difficult time.

‘Our investigation is ongoing and extensive enquiries have already been completed but we’re urging anyone with any information that could help us with our enquiries to get in touch with us as soon as possible.

‘We know there were a lot of people standing at the bus stop when the assault happened and we’re urging them to please come forward with any information which could help us.’

Detective Sergeant Kayne Rukas, of Nottinghamshire Police, said: ‘We know there were a lot of people walking in the street and standing at the bus stop at the time of the assault who may have information that could help us with our investigation.

‘There were also a lot of people on the bus who may be able to help us with our enquiries.

‘The victim is now very unwell and in a serious condition in hospital. We’re urging anyone with any information about the assaults to please get in touch with us.’

A spokesman for Nottingham City Transport said: ‘Our thoughts are with the family and friends of this young lady at this very difficult time.

‘CCTV from the bus has been provided to Nottinghamshire Police as part of their investigation in to this appalling attack and we continue to support their efforts to identify the culprits.

‘We would also like to publicly recognise our driver, who went upstairs to intervene and acted as a barrier between the attackers and the young lady, after he asked them to leave the bus.’