A teenager suffered a stroke after he tore an artery in his neck while riding a water slide.

The unnamed 16-year-old presented to Rashid Hospital in Dubai after being unable to walk or stand without help for 16 hours.

He mentioned he had ridden a slide at a water park 12 days before, which caused him to experience vertigo that came and went for ten minutes.

CT scans revealed the teen, who was from Korea, had suffered a stroke in the part of the brain called the cerebellum, which controls posture, balance and co-ordination.

Further examination showed he endured a left vertebral dissection – a flap-like tear to the inner lining of an artery in the neck that supplies blood to the brain.

After being treated with anti-clotting drugs, the boy made a full recovery within three months.

As well as being unable to walk, the boy was also vomiting and complaining of nausea, and could not swallow, BMJ Case Reports revealed.

Upon examination, doctors revealed he had Horner’s syndrome, which is defined as having small pupils, drooping eyelids and an inability to sweat from the face.

His left side was the most affected, with it having uncontrolled eye movements, a reduced gag reflux and barely any sensation of pain.

As well as a bleed to his cerebellum, a CT scan also showed he was suffering from left lateral medullary infarct.

This occurs when the blood and oxygen supply is cut off to the medulla – the part of the brain that controls unconscious body responses such as heart rate, breathing and sneezing.

It was too long after the incident for the teen to be treated via thrombolysis, which uses clot-busting drugs to disperse the thrombus and return the blood supply to the brain. The NHS recommends it is carried out within four-and-a-half hours.

He was therefore treated with another anti-platelet, which was not named, and fed via a tube due to him being unable to swallow. The tube was removed after just one week. 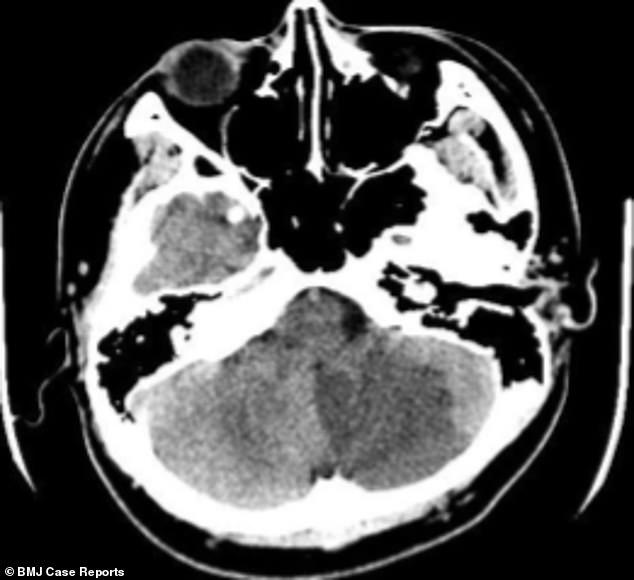 CT scan reveals the teen, who was from Korea, had suffered a stroke in the part of the brain called the cerebellum, which controls posture, balance and co-ordination

Tears to one of the arteries in the neck – known as a cervical dissection – are a major cause of stroke among people under 50. Such injuries can cause clots to develop that affect the blood supply to the brain and lead to the life-threatening injury.

Many sufferers assume their stroke occurred spontaneously as they do not class minor traumas that occur while at a theme park, or when swimming or scuba diving as a potential cause.

But the authors wrote: ‘Trauma as minor as simple neck turns during water slide rides can produce cervical dissection.’ This can occur if a joint is stretched or rotated beyond its normal scope of movement.