This is the shocking moment a teenager flipped backwards out of an amusement park ride as it swung and spun in Brazil.

Mobile phone footage captured Felipe Moreno as he stood up on a ride known as ‘Samba’ at a theme park in Luisburgo.

The ride, which moves up and down whilst spinning, had just begun an upwards swing when the teenager grabbed the metal bars on the back of his seat.

Mr Moreno, 19, then flipped backwards from the ride – his legs shooting vertically in the air as he fell.

Nearby passengers glanced around in shock as they noticed the teenager’s sudden disappearance.

Mr Moreno, from Manhuaçu, had visited the amusement park during a celebration on Friday night when he decided to go on the ride.

After he fell from the platform, the teenager reportedly hit his head on a metal structure and suffered a serious head trauma.

He was rushed to the UPA (Emergency Care Unit) in Manhuaçu by ambulance where he today remains in a critical condition. 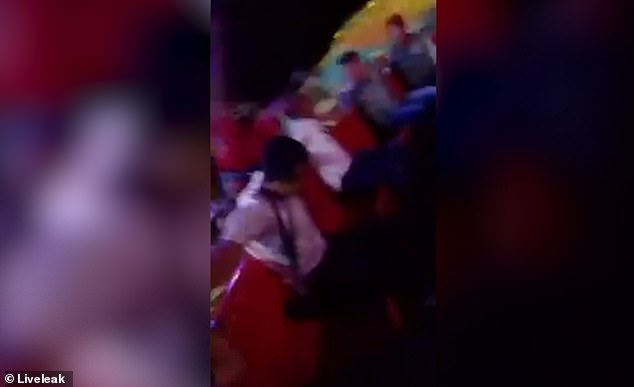 Mr Moreno’s father, John, said: ‘Their friends filmed the scene with a cell phone. The picture shows my son being thrown out of the toy.

‘He banged his head on the iron structure, about four feet off the ground.

‘My son is in the ICU in very serious condition and we not know what to do [sic].’

Ensign Freitas, from Manhuaçu Fire Department, said: ‘The toy is banned until the owner presents the maintenance reports, attested by the engineer who signed the documentation.’