A teenager has told of how she suffered a brain injury after hitting her head on a toilet cubicle door during a sober night out.

Lottie Butler, from Kirkby-in-Ashfield, Nottinghamshire, claims her life has been turned upside down since the accident last year.

The 18-year-old now struggles with the hidden effects of her brain injury, such as memory loss, difficulties concentrating and fatigue.

The sixth-form student said her school work now leaves her ‘exhausted and tired’ – and fears she won’t be able to enjoy university when she goes.

Lottie Butler, from Kirkby-in-Ashfield, Nottinghamshire, claims her life has been turned upside down since the accident last year

Recalling her accident, Miss Butler, out with her boyfriend at the time, said: ‘I remember banging my head on the door as I left the toilet cubicle.

‘Then the next thing I know, I was surrounded by the student union’s emergency medical staff.

‘It was really frustrating because everyone just assumed I’d had too much to drink that night and that’s why I fell and hit my head, when in reality I was sober.’

Doctors diagnosed her with a fractured skull and post-concussion syndrome, after suffering the injury.

Miss Butler, currently in the second year of sixth form, was unable to attend school for several months after her brain injury.

She said: ‘The process of travelling there, socialising with friends and learning was just too exhausting. 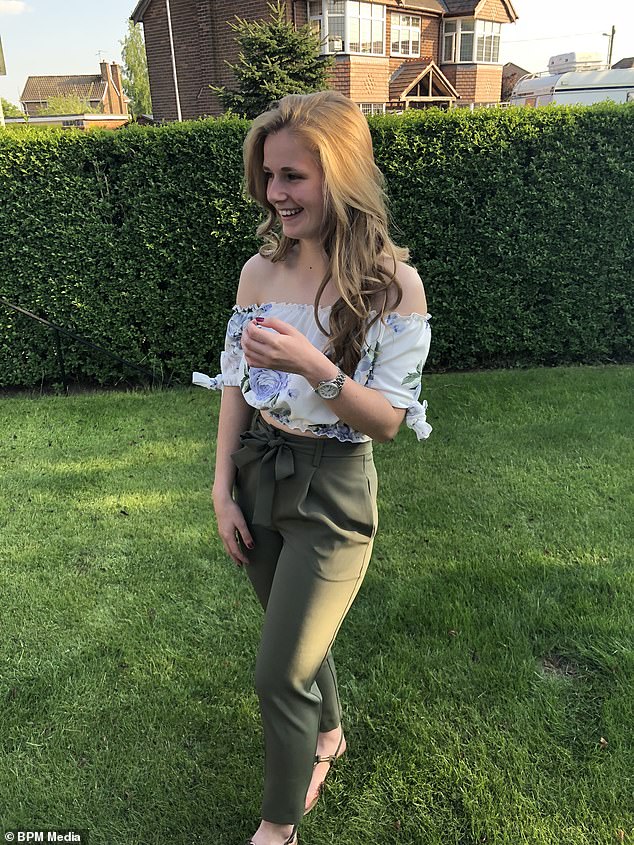 The 18-year-old now struggles with the hidden effects of her brain injury, such as memory loss, difficulties concentrating and fatigue

WHAT IS POST-CONCUSSION SYNDROME?

Post-concussion syndrome is a complex disorder in which various symptoms — such as headaches and dizziness — last for weeks and sometimes months after the injury that caused the concussion.

Concussion is a mild traumatic brain injury that usually happens after a blow to the head. It can also occur with violent shaking and movement of the head or body.

In most people, symptoms occur within the first seven to 10 days and go away within three months. Sometimes, they can persist for a year or more.

‘Now, I find myself sleeping through days on end after being at sixth form for just a few hours.’

Miss Butler hopes to study psychology and sociology at university, but fears her ongoing battle may stand in her way.

‘My education has suffered so much as a result of my fatigue. My attendance at sixth form is 40 percent which means I miss a lot of the content,’ she said.

‘I’m worried my fatigue will stop me from enjoying the typical university experience and everything that comes with it, from the long lectures to late nights partying.

‘I don’t want to undo the progress I’ve already made, but I want to be able to do the same things other people my age do.’

Miss Butler decided to share her story as part of Headway’s Brain Drain: Wake up to fatigue awareness campaign.

Fatigue – or excessive tiredness – is one of the most commonly experienced effects of brain injury.

It is the most commonly cited effect of brain injury reported by the 11,000 callers to Headway’s helpline each year.

A survey released as part of the campaign and to mark Action for Brain injury Week 2019 has shown the issue of chronic fatigue is widely misunderstood.

The charity claims this often leads to brain injury survivors feeling social isolated and being discriminated against.

Peter McCabe, the chief executive of Headway, said: ‘It is clear that there is a distinct lack of understanding of pathological fatigue across the UK.

‘As a society, we need to wake up and recognise the debilitating effects fatigue can have on people living with the long-term effects of brain injury.

‘It’s very concerning that so many of the people we support have told us they feel they have been unfairly treated due their condition.

‘The effects of brain injury can be hidden and, as a result, widely misunderstood – even by the brain injury survivor themselves.’