‘It bit straight through my leg’: Surfer, 17, suffers horror wound after 7-ft shark attacked him when he fell off his board in waters off Florida

A surfer from Florida is recovering after being attacked by a shark which left him requiring dozens of stitches in his leg.

Jordan Hooper, 17, was surfing near Ormond Beach near Daytona Beach and was 100 feet from shore when he was knocked off his board by a wave.

He felt something in the water as he kicked away, and suddenly felt a searing pain around his right leg.

Although he never came face to face with the shark, he knew that he had been the victim of an attack after seeing the sea turn red around him.

Jordan Hooper, 17, had been surfing near Ormond Beach, Florida when he fell off his surfboard and kicked something in the water

‘I started swimming toward the board and that’s when I kicked something in the water. It grabbed completely around my leg.

‘As soon as I kicked it, boom! It all happened so fast! It completely grabbed onto my leg,’ he said to Tracking Sharks.

‘The back of it is the worst. All of its teeth went straight through my leg,’ Hooper said to WIST. ‘They said it could have been anywhere from a 6 to 7-foot blacktip.’ 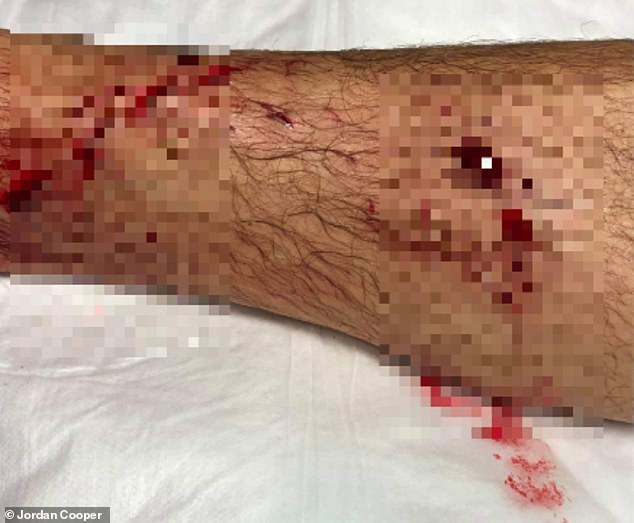 He didn’t know what he had kicked until he suddenly felt his leg, pictured, being clamped down upon. The sea around him turned red and Hooper realized he had been bitten by a shark 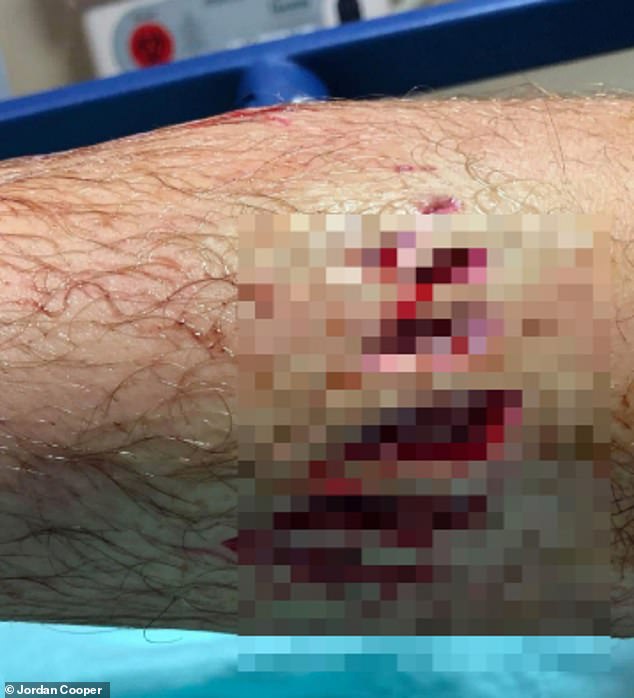 ‘That’s when things just started going through my head. I turned and saw all the blood in the water and confirmed what happened. I knew I needed to swim to my board.’

‘I think, if anything, I kind of got in its way more than anything when I kicked it. I think it lost its cool and just snapped on me,’ he said.

The current in the ocean was so strong and coupled with blood loss from his shark bite, Hooper struggled to swim back to his surfboard

‘I became exhausted, and felt like I was going to pass out,’ he said.

He tried to signal his friends, but they didn’t understand what had happened. 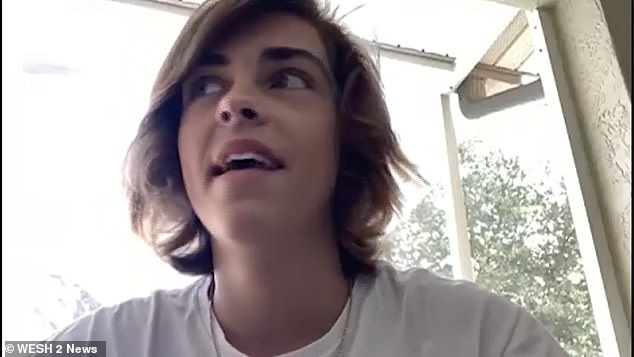 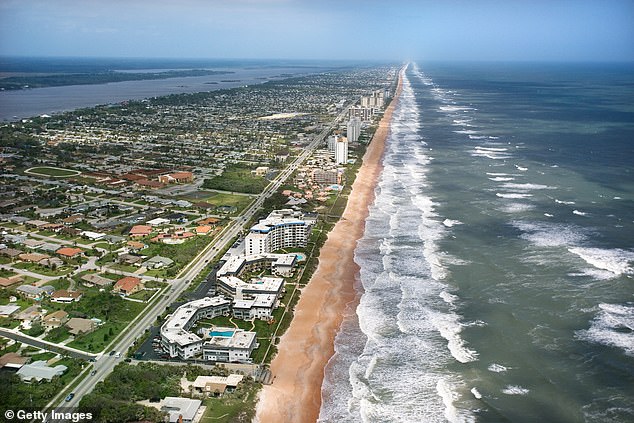 The teenage have been swimming in the warm waters off Ormond Beach, Florida

‘That’s when I realized I was wasting my energy, but I needed to get on shore before anything could get any worse.’

Fortunately, a large wave came by picking up the teen along with his board giving him a ride back to the beach.

It took a further 45 minutes before paramedics arrived to take the teenager to hospital.

He had to go to the emergency room for a few hours and will have to stay out of the water while his leg heals and the stitches are removed.

Nevertheless, Hooper says he plans to get back on top of his surfboard as soon as he is healed.

‘I’m sure I’m going to have a little bit of PTSD. I’m going to step on something in the water, and it will freak me out a bit. That’s going to take some time to get over for sure,’ he said. 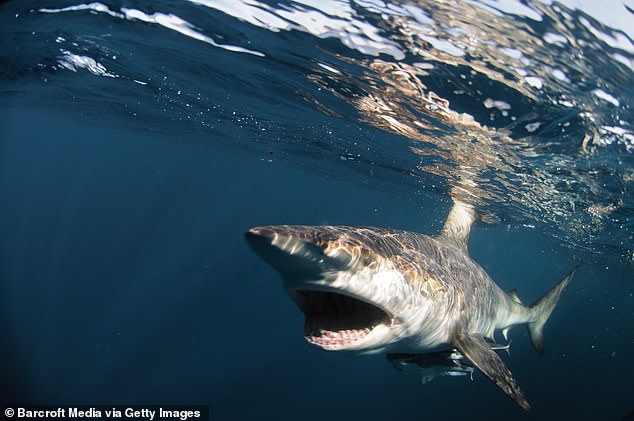 Hooper believes he was bitten by a black tip shark, pictured (file photo). He is the 10th shark bite victim of the year in Volusia County.

‘If you look at it, every time you get in the water there is going to be a shark 50 feet from you. They are just as scared of you as you are of them. Obviously, I am going to get back in, it’s just going to be sitting in my head the whole time. I was bitten by a shark and I don’t want to do it again.’

Hooper is the 10th shark bite victim of the year in Volusia County.