Millie Riding, 19, from Bolton, in Greater Manchester, thought she was ‘going to die’ after swallowing two Elemis capsules

A teen who is a self-confessed ‘idiot’ thought she was ‘going to die’ after swallowing two Elemis capsules that contained oil meant for lathering on skin.

Millie Riding couldn’t wait to try the Elemis Cellular Recovery Skin Bliss Capsules on May 13 but after failing to correctly read the packaging, she swallowed two of them.

The 19-year-old knew something was wrong when she struggled to consume the lozenges so she referred back to the instructions which explained they were not meant for internal consumption.

However, the customer advisor still claims the instructions were not clear enough but admits she herself has a reputation for being ‘dumb’.

After experiencing stomach ache the next day, Ms Riding feared she would die but after feeling no other symptoms she still intends to continue using the product – only this time on her face.

Ms Riding, from Bolton, in Greater Manchester, said: ‘I felt like an idiot. I just kept thinking, ‘why did I do that?’ I don’t read things properly. It wasn’t properly explained for somebody dumb like me.

‘I had really bad tummy ache the morning after and I thought I was going to die but nothing has happened.

‘I swallowed two but it took me ages and they just tasted like plastic. I knew something wasn’t right. I checked the back of the box and it said don’t internally consume and then I thought ‘oh no’.’

The instructions for the product, which are to twist the capsules open in order to access oil inside that you lather on your skin, are stated on the packaging. 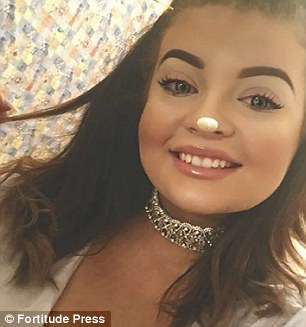 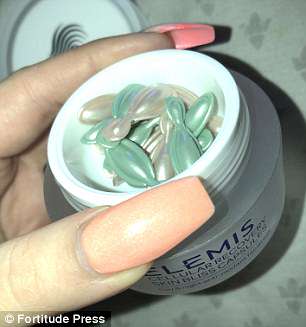 Ms Riding couldn’t wait to try the Elemis Cellular Recovery Skin Bliss Capsules but after failing to correctly read the packaging, she swallowed two of them

Ms Riding said: ‘Everyone was going mad at me in my family but it is expected of me now because of how blonde I am. I’ve got a bit of a reputation. I fall for things quite easily.’

Previously, after spotting a Facebook post that said putting a phone in a microwave for 30 seconds would charge it, Ms Riding tried this and blew it up and has since been known for being ‘dumb’.

Ms Riding said: ‘I must have read it wrong because I was really excited to try them because I had never tried this product before.

‘There were no effects on my skin [after swallowing them]. I’m going to keep using them but on my face.

‘Everyone in work was laughing at me and found it hilarious. They couldn’t believe I had done it.’ 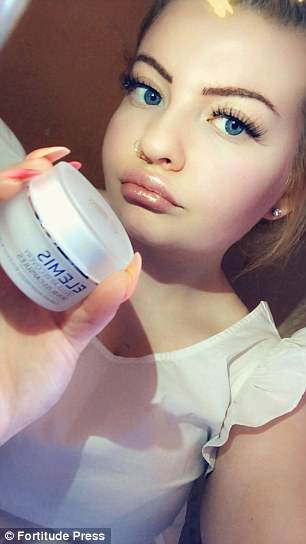 Ms Riding said: ‘Everyone was going mad at me in my family but it is expected of me now because of how blonde I am’

‘The ELEMIS Cellular Recovery Skin Bliss Capsules, originally launched in 2004, are ELEMIS’ day and night anti-oxidant facial oils for use on the skin day and night.

‘Clearly labelled on the component, carton and leaflet inside of each retail product, the how to use instructions state:

‘Apply the contents of one pink (Rose) capsule in the morning and one green (Lavender) capsule at night.

‘Twist off the tip of the capsule, warm the oil between the palms for a few seconds and apply to cleansed face and neck, massaging lightly with fingertips.

‘Please note that in colder climates, the product may solidify slightly, but it will become liquid again when rubbed between palms.

‘If contact with eyes occurs, rinse thoroughly. Not for internal consumption.’

‘Skincare formulations in this type of capsule delivery system are very common in the beauty industry and can be found in many of the main facial skincare ranges.’