Teenager went BLIND after eating only chips, crisps and chocolate since he was two

A boy who went blind after years of eating only chocolate and crips said he finds it physically impossible to eat healthier food.

And, after an optician referred him to a doctor, Mr Dyer, who appeared on This Morning today, found out his blindness had been caused by a lack of vital vitamins and minerals.

His diet, lacking in anything healthy, had consisted only of chips, crisps, chocolate and occasionally yoghurts since he was two years old, according to his mother.

Harvey Dyer, 18, went on This Morning with his mother, Kerry James, and revealed how he is physically unable to force himself to eat normal food even though he wants to

‘I don’t know if it’s a mental block in my head,’ he told Philip Schofield and Holly Willoughby on ITV’s This Morning earlier today.

‘I would love to eat food but I just cannot get it into my mouth, physically.’

Mr Dyer has completely lost the sight in his left eye because his body was so low on vitamins for so long, and the vision on his right side is almost gone, too.

He hadn’t said anything about his gradually deteriorating eyesight until he went out to buy food last year and realised he couldn’t see.

Coming home to tell his mother, Kerry James, 45, that he didn’t want to go out any more because of his vision, he was taken to see a doctor.

They revealed that malnutrition – a lack of vitamins and minerals in his diet – had caused permanent nerve damage in his eyes.

This condition is called nutritional optic neuropathy and is caused by a lack of essential nutrients required for normal functioning of the nerve fibres in the eye.

The family were inspired to share his story after reading a recent case report published in the Annals of Internal Medicine journal which revealed a boy in Bristol went blind after eating only French fries, Pringles, white bread and sausage. 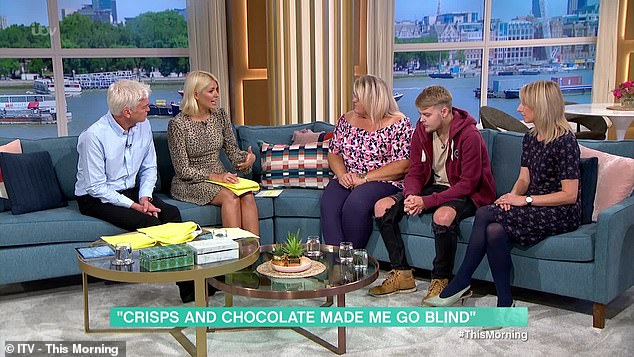 ‘[In my right eye] I can just about see my hand moving, that’s about it. And I’ve got all different white lines and colours in my eye.’

ARFID was only officially recognised in 2013, according to This Morning’s resident dietitian, Ursula Philpott.

It is characterised by people refusing to eat certain foods or severely restricting how much they eat.

ARFID is the second-most common eating disorder in children under 12 years old.

It is categorized as extreme picky eating.

A child may have a short list of acceptable foods and skip one or more entire food groups.

This can lead to weight loss, nutrient deficiencies, growth disturbances, and social anxiety.

The onset of ARFID may be due to a form of food-related trauma including a negative experience with eating such as choking, gagging or vomiting.

More extreme than fussy eating, the condition may cause people to vomit, choke or become afraid or upset around food, according to the charity Beat Eating Disorders.

It is different from conditions like anorexia and bulimia because it’s not linked to body image, but more of a physical aversion to food.

Ms Philpott said: ‘To have it to such an extreme as Harvey’s got it is incredibly rare.

‘We do know that people [with ARFID] avoid their food based on either the sensory characteristics of the food, or sometimes it’s a fear of food – a fear of choking or of the sensation of food inside them.

‘Sometimes it’s simply about not having interest in food.

‘There’s all different presentations but they all result in malnutrition. It doesn’t necessarily mean that someone doesn’t grow properly or that they’re underweight.

‘But, just like in Harvey’s case, it can be that they’ve got vitamin and mineral deficiencies which are quite hidden.’

Ms James, from Gloucester, has four other children and said they eat normally but Harvey has been unable to since he was a toddler.

She said: ‘About when he was two he just stopped eating. He would either be sick, he’d gag, he would choke if you tried to get it in him. It was awful – he’d sweat and he was crying, screaming.

‘I’ve done everything. And I know people say it’s because I’m a bad mum.

‘I don’t listen to any of that because i have fought for Harvey since the age of two and I will continue fighting for him.’

Mr Dyer now drinks protein shakes with added vitamins to try and boost his nutritional intake, but the family don’t expect him to ever get his sight back.

The nutritionist, Ms Philpott, said if parents are concerned about their child’s diet – if they eat fewer than 20 foods, for example – they should ask their GP to refer them to an eating disorder specialist.

WHAT IS NUTRITIONAL OPTIC NEUROPATHY?

The condition is a dysfunction of the optic nerve.

It’s caused by a lack of essential nutrients required for normal functioning of the nerve fibers.

Most commonly, it results from folic acid and vitamin B complex deficiency.

But in some cases poor dietary habits can also be a cause. Although such cases are rare in developed countries.

Nutritional optic neuropathy is characterised by the slow and painless decrease in vision.

It can be accompanied by the color vision dysfunction and if left untreated causes permanent blindness.

The treatment is mostly based on folic acid, vitamin B complex, and protein replacement, as well as eliminating risk factors of neuropathy.