Teenager wins £8,500 payout from her school after she was sent home because of her Afro

A teenager who was repeatedly sent home from school because teachers said her Afro hair blocked other pupils from seeing the whiteboard has received a £8,500 payout.

Ruby Williams was 14 when she was told by Urswick School in Hackney, east London, that her hairstyle was against uniform policy.

The Church of England school also told her that it was attempting to meet health and safety standards.

Ruby Williams (pictured) was 14 when she was told by teachers at Urswick School in Hackney, east London, that her hairstyle blocked other children from seeing the whiteboard

In addition, in her Year 11 yearbook, a photo of her from Year 7, in which she had straight hair, was used, according to The Independent.

Now aged 18, Ms Williams, has received the payout after her family took legal action with the backing of the Equality and Human Rights Commission.

They claimed that she had been discriminated against on the basis of race.

She said that she had been ‘humiliated’ by the school’s actions and her parents, Kate and Lenny Williams, said the three-year battle ‘destroyed’ their daughter’s confidence.

She was told her hair breached policy, which stated that ‘afro style hair must be of reasonable size and length’. That policy has now been removed from its website. 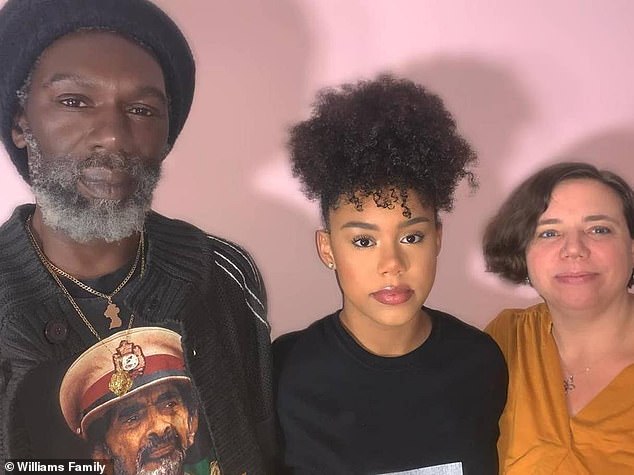 Her parents, Kate and Lenny Williams (left and right), said the three-year battle has ‘destroyed’ their daughter’s confidence

After the school’s comments, Ms Williams tried several different hairstyles to keep to the rules including braids and extensions.

However they were too expensive or left her with a bald patch.

She also missed a lot of lessons during the dispute, which happened when she was studying for her GCSEs.

She told Sky News today that at first she thought that it was a joke and was shocked as she had had the same hairstyle through the whole of school.

She added that she was asked if she had heard of chemical relaxers and that it ‘messed up’ how she felt about school, making her feel like she didn’t want to go in some days.

‘I felt like any time I would walk into the school with my hair out, all eyes were on me,’ she told The BBC.

The school was also sent letters from Ruby’s GP and a clinical psychologist warning that she was suffering because of the policy.

She added that she thought that there was something wrong with it, because nobody else had her kind of hair.

In a statement to MailOnline the school said: ‘The Governing Body is hugely distressed if any child or family feels we have discriminated against them.

‘We do not accept that the school has discriminated, even unintentionally against any individual or group.

‘Our policy on hairstyles is that we need to ensure health and safety standards, especially in respect of practical lessons in PE, Technology and Science.

‘We ask children to tie long hair back and we don’t allow hairstyles which cover the eyes. We do not have any specific rules in respect of hair colour, length or style. We simply ask that children have hairstyles that are reasonable for school.’

The settlement offer was made by the London Diocesan Board for Schools directly to Ruby’s family, without any admission of liability from the school.

Rebecca Hilsenrath, chief executive of the EHRC, said that Ruby’s hair is an important part of who she is and that schools should treat all pupils equally.

Ruby, who’s now studying for her A-levels at another college, says she does now feel confident about her hair.