Teenagers are spending too much time on social media at bedtime’, study warns

Teenagers ‘are putting their health and education at risk by spending too much time on social media at bedtime’, study warns

One in five adolescents in the UK are spending more than five hours on social media before they go to bed, according to a university study.

The University of Glasgow study, examining the link between social media use and sleep, found that an increased amount of time on social media was having a detrimental impact on a young person’s health and education.

During the study, researchers looked at the figures from 11,872 adolescents across the country between the ages of 13-15.

According to the report, more than 20 per cent of British adolescents are spending more than five hours on social media, with the average teenager spending one to three hours scrolling through the popular sites.

Researchers also found that teenagers who were on social media for a greater period of time were 68 per cent more likely to fall asleep after 11pm on a school night.

These teenagers would also be more likely to have frequent nighttime awakenings, the effects of which could take a concerning toll on their day-to-day functioning and overall health.

Scientists also found that girls were more likely to spend a longer period of time  checking their social media, with 28.4 per cent spending more than five hours on social media sites compared to the 13.7 per cent of boys spending the same amount of time. 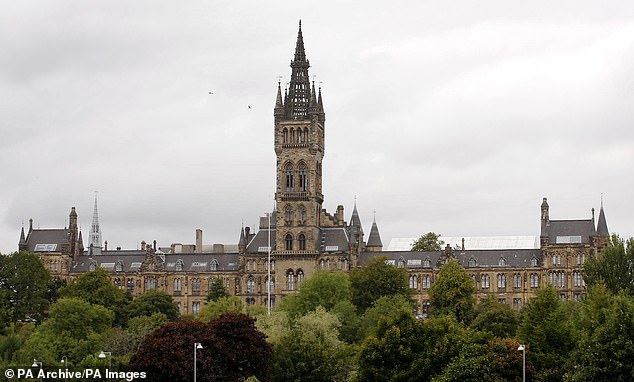 The university report was conducted by psychologist Heather Scott, Professor of Neuroscience and Biopsychology Stephany M Biello and School of Psychology Lecturer Heather Woods from the University of Glasgow

The university report, conducted by psychologist Heather Scott, Professor of Neuroscience and Biopsychology Stephany M Biello and School of Psychology Lecturer Heather Woods, now calls for support to be given to help young adults find a balance between sleep and social media use.

The researchers write: ‘Interventions should focus on addressing delayed sleep onset, by supporting young people to balance online social interactions with an appropriate sleep schedule that allows sufficient sleep on school nights, with benefits for health and educational outcomes.’