A teenager whose birthmarks cover her entire body has revealed how people have accused her parents of burning her as a baby.

CMTC gives her skin a red, marbled appearance. SWS is responsible for the port-wine stain on her face.

Miss Smith has been hospitalised – at one point for eight months – because her disorders caused lesions inside her body affecting her spine, kidneys, liver and stomach.

She has endured bullying for her whole life, as children asked if she was on fire and accused her of faking her illness for attention.

Her parents, Kelly Smith, 43, and Scott Smith, 40, faced hurtful comments from strangers accusing them of letting her get sunburnt or scalding her in the bath.

Despite her confidence being shattered growing up, Miss Smith openly speaks about her condition and is an aspiring makeup artist.

Miss Smith suffers from two different rare conditions: Cutis marmorata telangiectatica congenita (CMTC) and Sturge-Weber Syndrome (SWS). Both cause red patches all over her body and SWS has caused glaucoma in her left eye 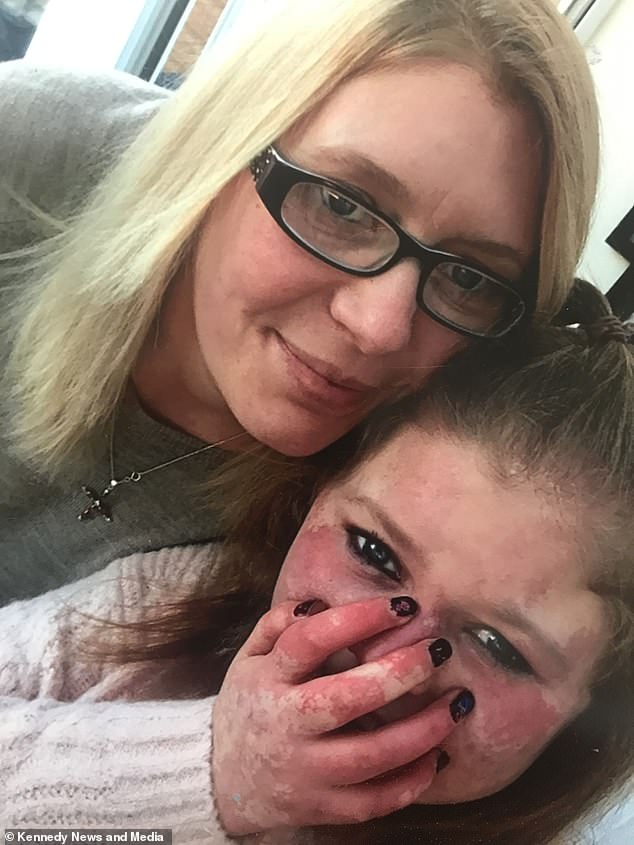 Amba Smith, 17, who has a birthmark that covers her entire body, has revealed how people would accuse her parents of burning her as a baby. Pictured with her mother, Kelly Smith, 43 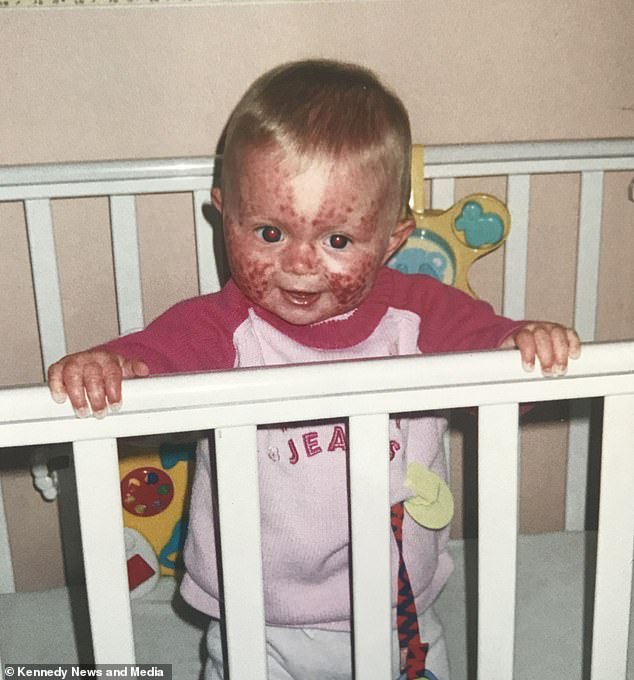 Parents, Kelly Smith, 43, and Scott Smith, 40, faced hurtful comments from strangers accusing them of letting their daughter get sunburnt or for scalding her in the bath 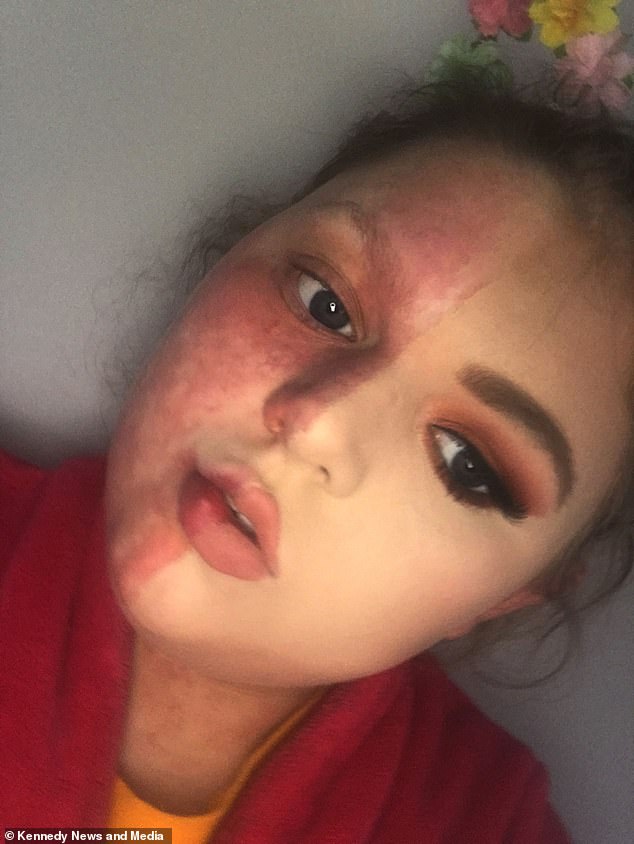 Despite her confidence shattered, Miss Smith openly speaks about her condition and is an aspiring makeup artist who uses her birthmark as a unique design (pictured)

Miss Smith, from Lincoln, said: ‘I was in year three when the bullying started. I still remember it so clearly now.

‘People would say stuff about my skin and ask if I was in a fire or why my parents let me get sunburnt.

‘Some people would even ask if my parents scalded me in the bath.

WHAT CONDITIONS CAUSE HANNAH SMITH’S BIRTHMARKS?

CMTC is a birthmark that affects the blood vessels in the skin causing a net-like pattern on the skin giving a ‘marbled’ appearance.

It is not fully understand what causes CMTC. It probably develops early in fetal life when the blood vessels are forming. It is not passed on from parent to child. It is unlikely to have been caused by anything that happened during pregnancy.

The skin pattern ranges in colour from blue to purple and may become more visible in extremes of temperature.

The pattern may affect one area of the body – most commonly a leg, but sometimes also the arms and trunk. The pattern rarely affects the face and scalp.

Fewer than 300 cases of CMTC have been reported in the medical literature, according to the National Organization for Rare Disorders.

SWS is a condition affecting the skin, brain and eyes. It is named after the doctors who described it in the late 19th century and early 20th century.

A port wine stain is a vascular birthmark caused by abnormal development of blood vessels in the skin. It can occur anywhere on the body, but in SWS it affects the skin around the forehead and/or scalp.

As well as the port wine stain affecting the skin, it will also involve an extra layer of blood vessels over the surface of the brain, the angioma. The angioma may be associated with seizures and developmental problems

It is not known how many people are diagnosed with SWS but it is a rare disorder.

It can affect all ethnic groups and is equally common in boys and girls. Children with a port wine stain on both sides of their scalp or forehead are more likely to have SWS.

‘My condition would cause my stomach to bloat when I was younger so other kids would call me fat even at the age of eight.’

Miss Smith’s mother used to get so upset by people’s comments she would avoid going out.

‘I used to walk down the street with Amba in her pram or pushchair and I would get comments like how dare I allow my child to be burnt in the sun like that or have I burnt her myself.’

Because she was so young, Miss Smith didn’t understand that she wasn’t like other children.

She said: ‘I thought my skin was just normal and there were lots of other people out there like me.

‘I thought I was just the only one at my school.

‘But as I got older and learnt more about my condition I realised it was really rare. We go to lots of meet-ups at hospitals and I’ve never seen anyone else with a birthmark like me.’

As well as the skin, Sturge-Weber affects the brain and eyes, causing glaucoma in Miss Smith’s left eye. Around 60 per cent of children with SWS have learning or development problems.

The birthmark on her face, also known as a port wine stain, is caused by abnormal development of blood vessels in the skin.

The main feature of CMTC is a net-like pattern on the skin giving a marbled appearance, caused by a birthmark that affects the blood vessels.

The two conditions, which are both so rare there are no clear prevalence statistics, overlap and give Miss Smith the red patchy appearance all over.

Underneath the patches of affected skin, Miss Smith can suffer with lesions which can attack her organs, such as her stomach.

This is not a usual symptom of either of the disorders, and doctors are unsure why Miss Smith is affected this way.

In year nine, Miss Smith was left hospitalised for eight months when a lesion developed on her stomach, leaving her in agonising pain and unable to eat.

Miss Smith said: ‘I missed so much education and people I thought were my friends accused me of lying and faking being ill for attention but I was in hospital in a lot of pain. 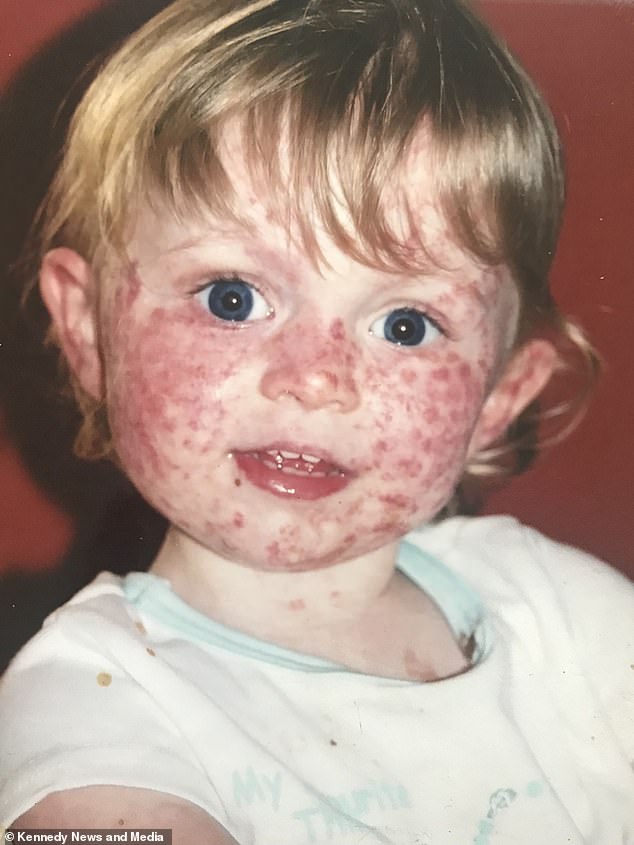 Miss Smith’s mother used to get so upset by people’s comments she would avoid going out. Pictured as a little girl when she didn’t realise her skin was different 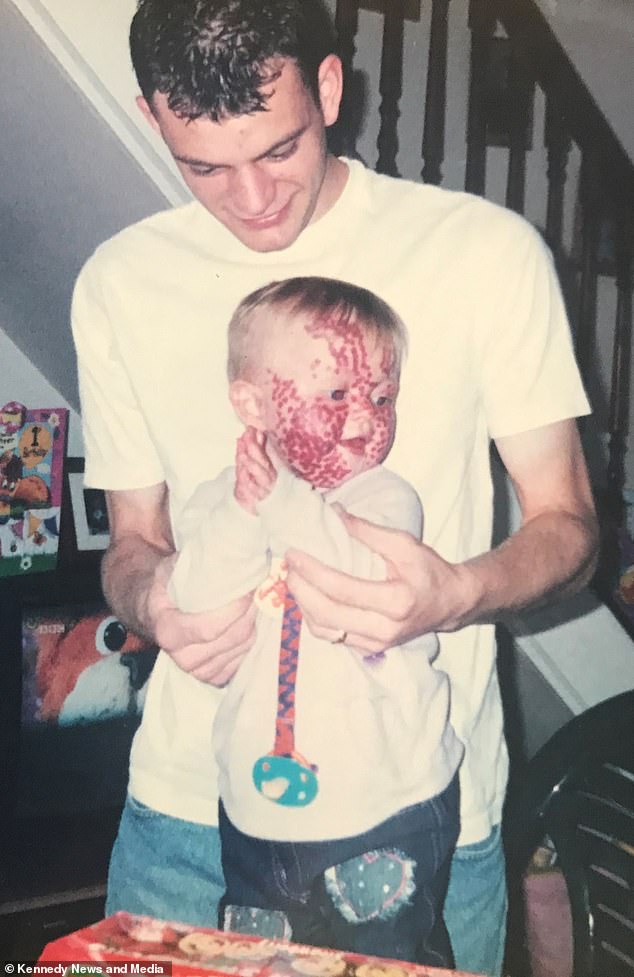 The birthmark on Miss Smith’s face, also known as a port wine stain, is caused by abnormal development of blood vessels in the skin in SWS. Pictured as a child with Mr Smith 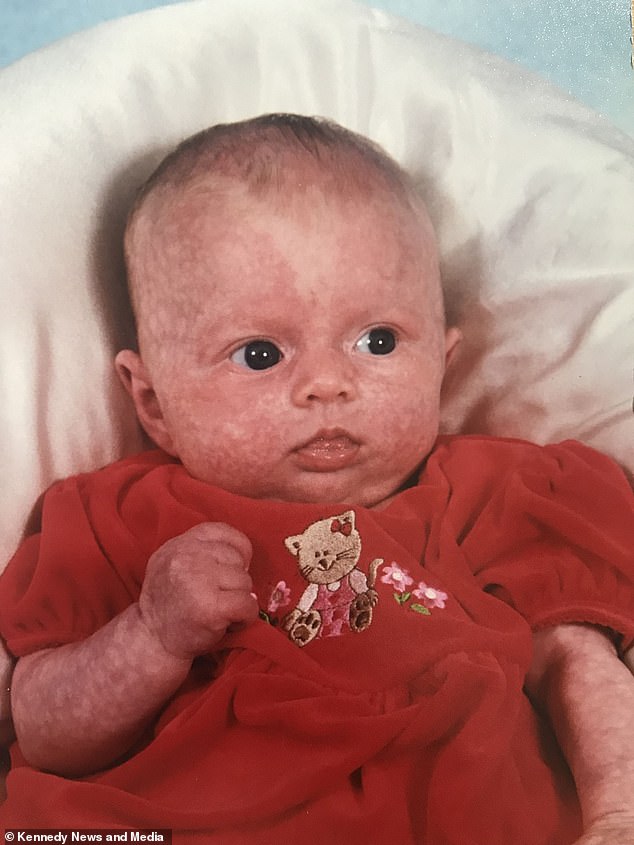 As a child, Miss Smith said she was bullied and children accused her of lying about being ill to get attention. Pictured, Miss Smith as a baby

‘All I wanted was to be back out there living a normal everyday life. There were times I resented my birthmark for taking all of that away from me.’

Although she had made some friends by middle school, Miss Smith said they turned on her and her confidence plummeted while she suffered with anxiety.

She was transferred to a hospital school for her GCSEs, and despite being hospitalised again in May 2018 and having to take her exams from her hospital bed, she passed and secured a place in college.

Since starting a level two beauty therapy course, Miss Smith’s confidence has bloomed and she has made many new friends who are completely accepting of her birthmark and tell her how beautiful she is with and without makeup. 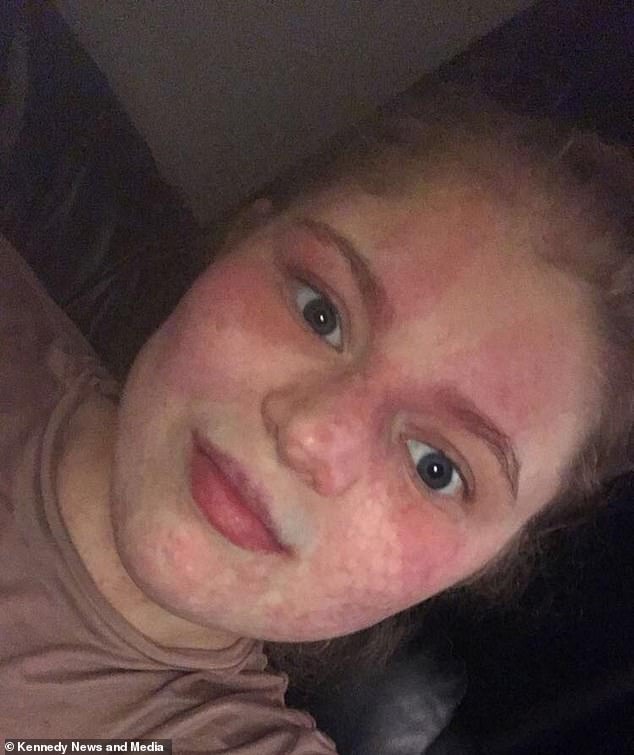 As a child, Miss Smith said she was bullied and children accused her of lying about being ill to get attention. Pictured with no makeup on now 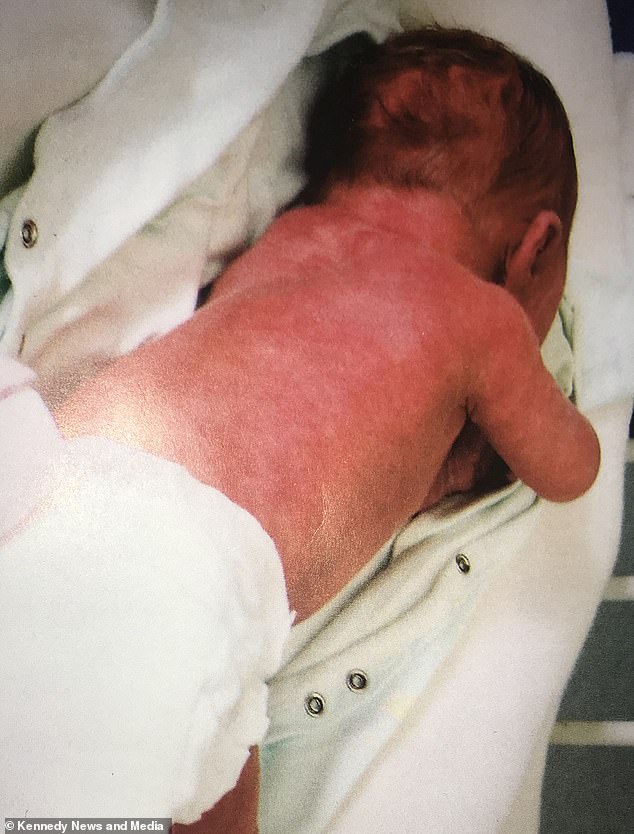 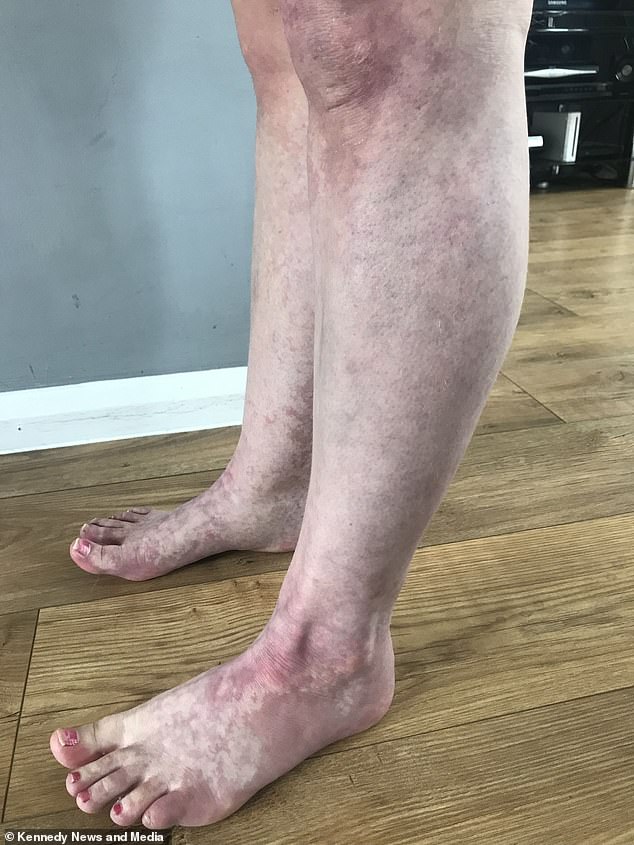 The main feature of CMTC is a net-like pattern on the skin giving a ‘marbled’ appearance, caused by a birthmark that affects the blood vessels 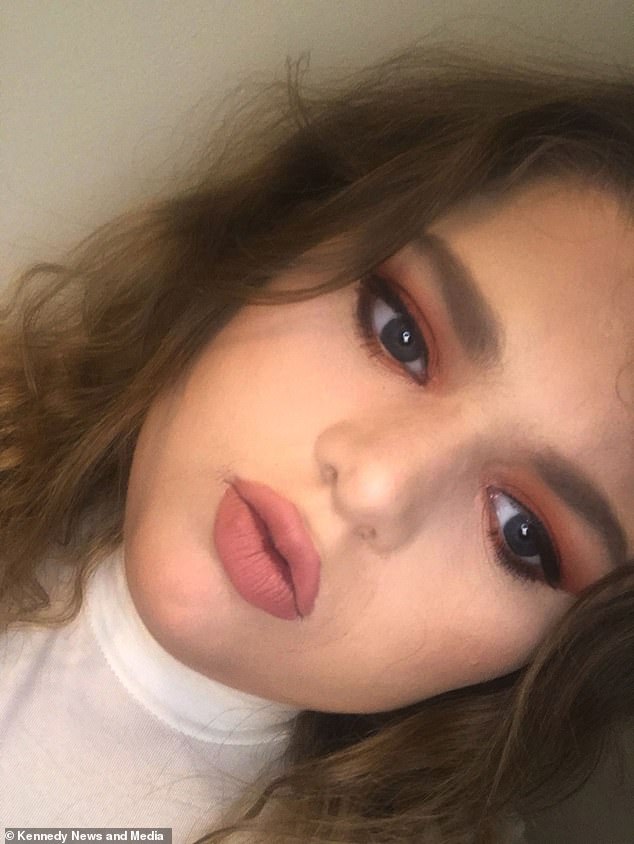 Now, instead of using makeup as a way to hide her skin, Miss Smith is able to go out without makeup on more often and even incorporates her birthmark into her looks.

She said: ‘When I took my makeup off, everyone came up to me to tell me how beautiful I am without my makeup on. It made me so happy.

‘Since that day, I’ve been going out more and more without my makeup on. I’m a lot more confident just being me.

‘Makeup at first was my coping strategy and a way of hiding my birthmark and changing myself but now I see it as a form of art and a way of showing people what I can do.

‘I’ve even started incorporating my birthmark into my makeup looks like putting a love heart around it. I’m starting to feel quite proud of being so unique.’

Mr and Mrs Smith have watched their daughter endure countless hospital appointments and procedures since she was born with the conditions, as well as bullying at school. 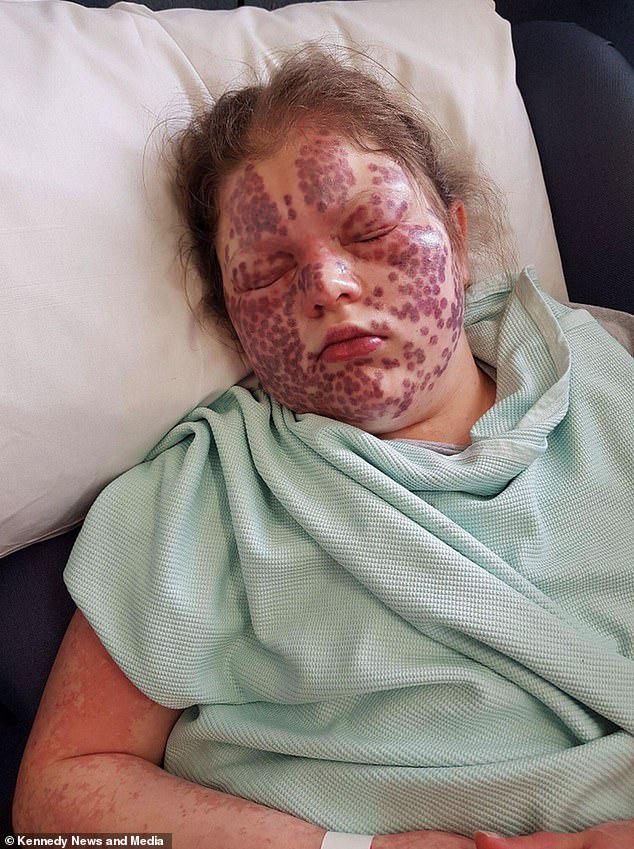 Miss Smith has had laser treatment on her face to try and slow the growth of her birthmark. Port wine stains continue to get thicker and redder throughout people’s lives. Pictured, having treatment three years ago which causes the purple dots 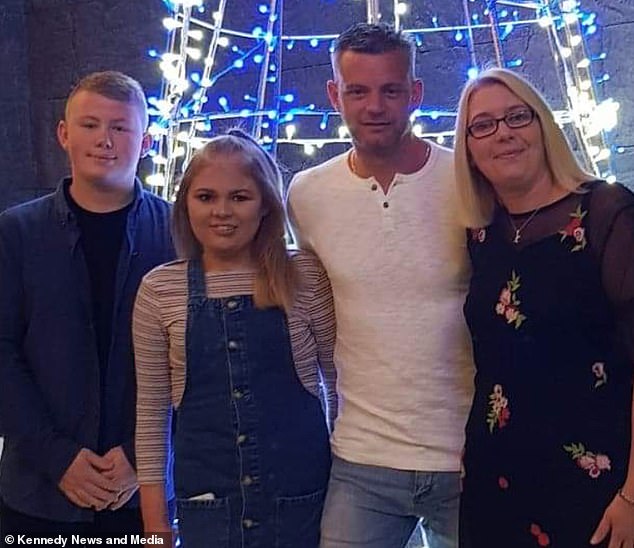 Mrs Smith said her daughter (second left) is a ‘great role model’ and admitted they had been worried about her future. Pictured, the family including brother Jordan Smith, 21, and Mr Smith 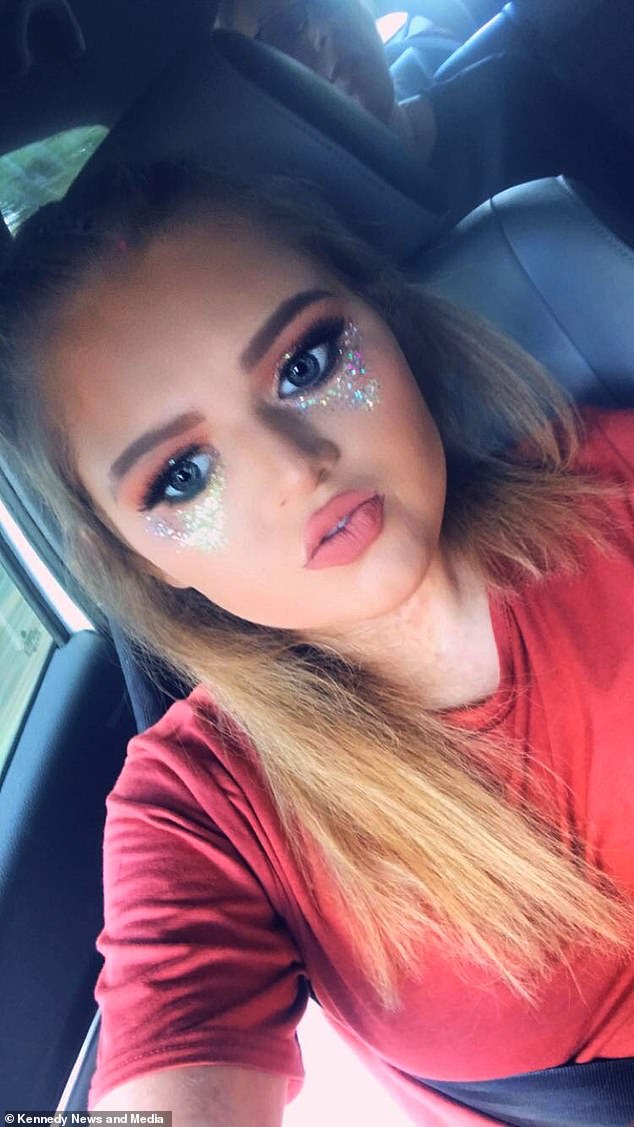 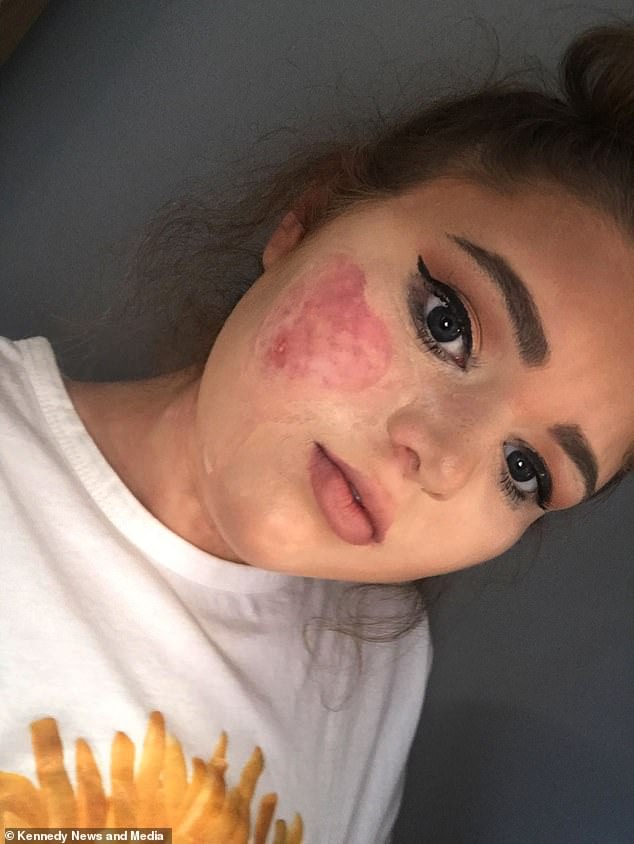 Miss Smith said: ‘I’ve even started incorporating my birthmark into my makeup looks like putting a love heart around it. I’m starting to feel quite proud of being so unique’

They admit there have been times when they’ve worried for their daughter’s future.

Mrs Smith said: ‘It has been very hard at times watching someone you love so much go through all the pain and treatments. You just wish you could take it all away from her.

‘She has struggled making friends from past experiences and gets very bad anxiety around people she doesn’t know.’

Miss Smith plans to go on to study to be a makeup artist in London later this year, leaving her parents ‘so proud’.

Mrs Smith said: ‘She has achieved so much with a lot against her at times and as her parents we are so proud. She is a true inspiration.

‘Amba is a great role model for anyone who is having difficulties in their lives. I know as her mum she will never give up and she will achieve a great life.

‘Amba is so beautiful and I’m so proud of her for everything she has achieved in her little life.

‘Whatever has been thrown at her she has stayed strong as much as she can and carried on with life.’