Teens squat under flyover ahead of Harry Styles concert

Huddled beneath an ugly concrete flyover, at least 50 teenage girls shiver in the relentless drizzle as lorries thunder by overhead.

With flimsy duvets the only barrier against the biting cold October night, it is hard to think of a more desperate location to sleep out. Yet most of the girls have been here for several nights on end.

But despite bleak appearances they are far from destitute and homeless. In fact, all of them have been braving the elements simply to get close to their idol, One Direction star Harry Styles.

Tonight, the floppy-haired heart-throb performs his first UK solo gig at the Eventim Apollo in Hammersmith, West London, as part of his 81-date sell-out world tour.

Although they have tickets, getting to the front of the standing section of the auditorium, closest to the stage where Harry will perform, is the ultimate goal for these ‘Directioners’, the name given to superfans of the boy band when it formed in 2010.

Many have travelled from all over the world for the opportunity. Some have rented nearby Airbnb apartments or hotel rooms, which they visit briefly to shower and use the toilet because otherwise they would forgo their precious positions in the queue. And some have been here since last Monday, camping outside the concert venue.

By Friday night the camp had become a sea of onesies, Primark duvets, sleeping bags, hoodies and singing (of Harry’s songs, obviously). Food rations are picked up from the nearby Tesco or McDonald’s, or deposited by Deliveroo. 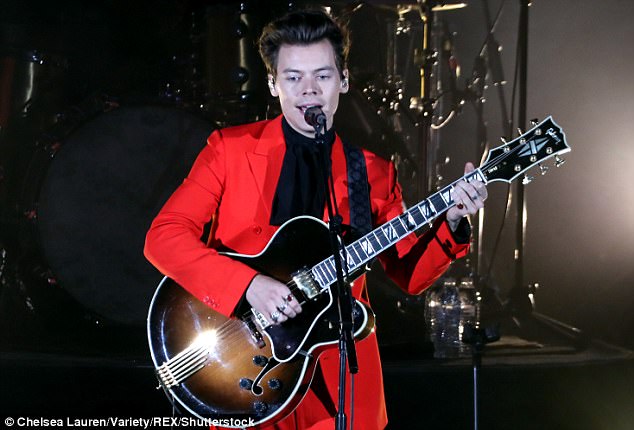 Although they have tickets, getting to the front of the standing section of the auditorium, closest to the stage where Harry (pictured) will perform, is the ultimate goal for these ‘Directioners’, the name given to superfans of the boy band when it formed in 2010

Pharmacy student Ariadna Esbo, 19, came all the way from Barcelona with three friends, also from Spain. ‘We have been here since Wednesday and we have been really cold. You really feel it at about 7 am, but we have three layers, three pairs of socks on and we are keeping warm in our duvets,’ she said.

‘My Mum knows we are coming to the concert but she thinks we are spending our other days at tourist attractions, not sleeping here.’

For Ruth Capps, 19, from Brighton, who has been camping since Thursday, this is just one of 19 of Harry’s gigs she plans to attend. ‘Nothing is too much for Harry,’ she said.

But asked if she hoped he would come and thank them for their loyalty, she joked: ‘I’d rather he didn’t, he would think we are crazy.’