A father who fractured his seven-week-old daughter’s skull has gone to prison still denying his crime.

John Robinson, 23, was convicted of assaulting Grace Bowstead while he was looking after her alone – but he still insists he was not responsible for her brutal injuries.

The baby was found ‘floppy’ and not breathing properly when an ambulance was called to her home in East Cleveland, Teesside in the early hours of October 18 2014.

Prosecutor Richard Bennett said the child ‘looked dead’, white, and was not crying or responding.

The little girl was left with a double skull fracture, brain bleed and bruised face and left arm and was rushed to James Cook University Hospital.

She has since made a full recovery, according to her mother Katie, 23.

Ms Bowstead told the Evening Gazette:  ‘She has flourished and is perfect – she’s my little miracle.’

But she is still devastated by what happened and says she ‘hates’ Robinson for what he did.

She said: ‘I look at the picture of him standing outside the courtroom, smirking and laughing around, when he did that to my baby and he has no remorse at all.

‘When my daughter even grazes her knee it knocks me sick, so how can he even live with himself after what he did to his own daughter?! 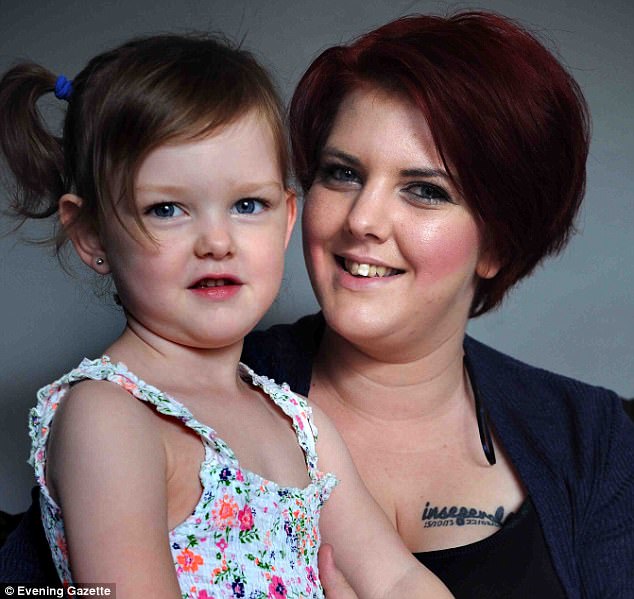 Grace Bowstead has made a full recovery, despite Robinson’s horrific attack on her. Pictured here with her mother Katie, 23

Jurors heard her injuries implied she had been shaken and her head smashed against something with considerable force.

A medical report showed there was no evidence to suggest it was an accident.

Robinson denied any assault, saying he was feeding and winding the baby when she ‘flopped back’.

He denied losing his temper, shaking or hitting her and said he could not explain how she came to be so badly injured.

He has since fathered another child, whose mother agreed to give the court a character reference.

Kate Dodds, defending, said: ‘The defendant maintains he was not the person responsible for causing those injuries.

‘There is nothing to suggest he is a violent or dangerous individual and this is anything more than a momentary loss of control.

‘His life was ruined from the moment that injury was caused.

‘This isn’t going to go away. The defendant wants to know his fate.

‘He’s not a lost cause. He has the support of his family. He is not a risk to the public.’

She asked the judge to spare him prison and insisted the Probation Service believed it was a one-off incident born of frustration. 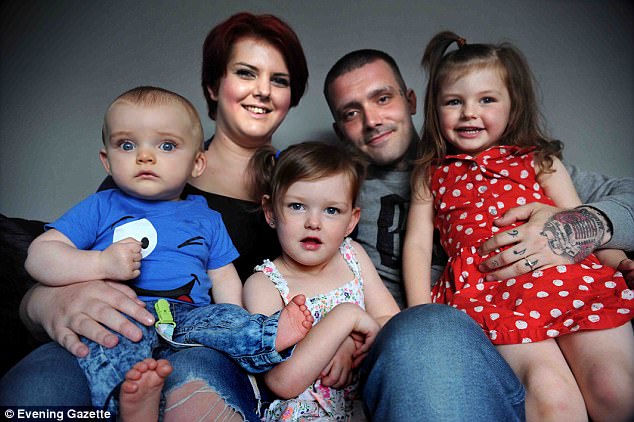 Grace is pictured with her mother Katie, partner Matthew, and her siblings Jacob and Olivia

She added the case had hung over Robinson’s head for almost three years while court proceedings dragged on.

But Judge Sean Morris told Robinson: ‘You had the care of a vulnerable small child, and the jury were satisfied that you lost your control and inflicted serious harm upon it.

‘The only good to come out of this case is that little child has made a full recovery. It could so easily have been different.

‘Little children are easily harmed in a flash of temper, and had you pleaded guilty I may have considered suspending the sentence.

‘As it is, you ran it in front of a jury who disbelieved you, and you cast aspersions upon your former partner. It was a nasty, cowardly offence.’

He said a suspended sentence was ‘out of the question’ but reduced the jail term in light of Robinson’s previous good character, mitigation and the ‘unacceptable’ delay.

Robinson was jailed for a year, but he will only have to serve half of his sentence.

Speaking after the hearing a NSPCC spokesperson said: ‘It is always deeply shocking when a parent violently injures their child.

Whatever the exact truth of John Robinson’s actions, it is clear he lost control and harmed his daughter.

‘Fortunately, this little girl has made a full recovery but we must remember that babies and young children are entirely dependent on those who care for them and everyone has a duty to look out for their welfare.’

The NSPCC helpline is available 24/7 for adults to get advice or share their worries about a child, anonymously if they wish. Call 0808 800 5000 or email help@nspcc.org.uk.