Iran has warned it is preparing to launch new long-range drones capable of staying in the air for 24 hours and carrying a range of weapons.

He also claimed the navy has a new destroyer ready to go on patrol and a second to be launched early next year.

Iran has claimed it is preparing to launch a range of new armed drones capable of remaining airborne for 24 hours (pictured, an Iranian Shahed 129 drone) 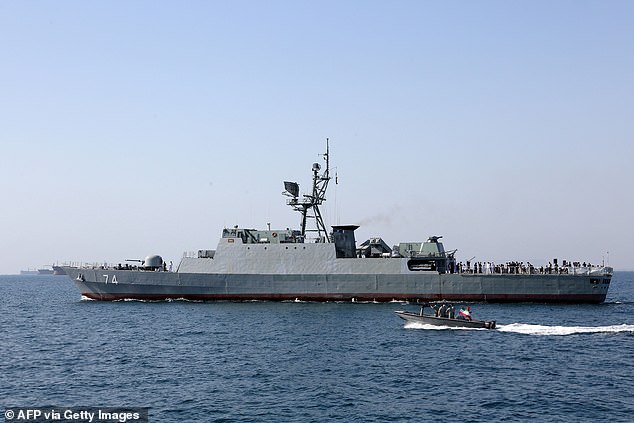 The commander also said Iran is preparing to launch a mine sweeper and the Simorq drone which can carry a range of rockets and bombs.

He said: ‘As regards drones, we will observe addition of long-range aircraft with very high flight ceiling whose level of (remote) guidance is special.

‘The Iranian Armed Forces enjoy very high capabilities, and the US does not dare to directly confront Iran, and that is why it uses proxy agents, such as terrorist groups, to attain its goals.’

The commander said his fleet would soon include a domestically made destroyer Dena early next year.

He said the destroyer Sahand, which has been undergoing sea trials is now ready to go operational.

He said: ‘Concurrently, we will witness the launch of a mine-clearing warship, Saba, in the Navy as well as a drone, namely Simorq, which has a flight durability of 24 hours and capability to carry different types of weapons, including bombs, rockets and projectiles.’

According to the Iranian Fars news agency, the navy is planning a new class of heavy destroyer Negin, which is expected to weigh more than 5,000 tonnes.

The Iranian navy has used its fleet of existing drones to harass US naval vessels patrolling the Persian gulf.