Why your internet bill is about to SOAR: Telco warns NBN bills will be hit by a huge explosion in internet use during lockdown – and says massive network use is now the new norm

Telecoms companies have warned that bills will surge as a result of unprecedented internet use during coronavirus lockdown.

More Australians needed access to the national broadband network than ever before after locking down in March, and this prompted a long-term change in internet use.

Managing Director of Aussie Broadband, Phillip Britt, said the demand for broadband would remain high after the COVID-19 pandemic – meaning bills would have to rise as companies are forced to buy more bandwidth.

‘We don’t believe traffic levels will return to original forecasts even without areas of the country going in and out of lockdown,’ he explained.

Telecommunications companies say NBN bills will surge due to the huge demand for internet during the COVID-19 lockdown (pictured, an Adelaide woman working from home in April) 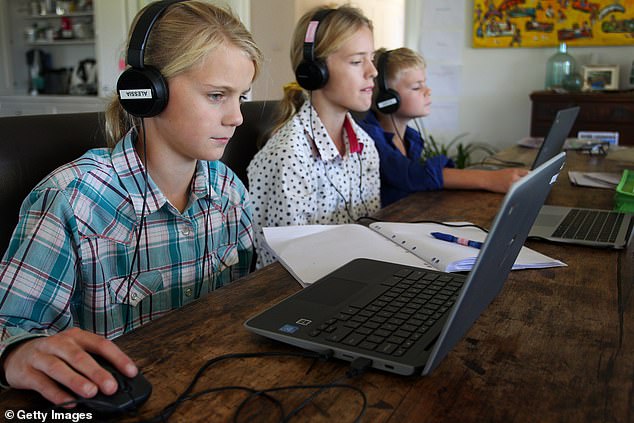 Internet providers including Telstra have confirmed their peak daytime traffic rose by as much as 70 per cent when compared to before the coronavirus.

‘People have become used to using their internet for more things and on more devices – whether it be working and schooling from home, streaming entertainment or shopping online,’ Mr Britt said.

He explained that internet providers must pay a Connectivity Virtual Circuit (CVC) charge to access a certain portion of bandwidth from the NBN.

But this will also result in higher prices.

NBN Co, the government-owned organisation operating the broadband network, released an extra 40 per cent CVC for free during the pandemic.

The extra 40 per cent has already been extended once and is due to expire in four weeks, raising alarm bells for Australian internet providers.

Providers will be forced to purchase more CVC to keep up with the nation’s increased demand for fast internet. 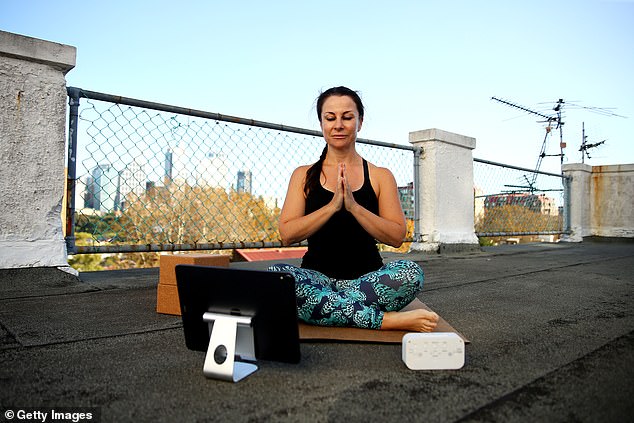 Internet providers must pay a fee to access fast download speeds from the NBN. An increased demand for internet will prompt a higher fee for customers (pictured, a woman directing an online yoga class from her rooftop in Sydney)

This will cost the providers more and ultimately be reflected in a price hike in customer internet bills.

‘They will either need to raise retail prices to keep the service levels the same in peak time speeds, or lower peak time speeds to maintain at least some level of margin,’ Mr Britt explained.

Mr Britt said prolonging the CVC offer would not fix the problem of NBN prices in Australia.

‘However, I believe that we need to scrap CVC and move to a single access charge based on the speed tier chosen, with no usage or CVC component,’ he explained.

The NBN Co has said it will continue to monitor network demand.

‘Data demand on the NBN’s main wholesale access service remains above the pre-COVID-19 baseline as Australians continue to rely on the NBN to access work, education and social events,’ a statement read.

THE BEST NBN PLANS IN AUSTRALIA

TPG: Unlimited data and 46megabits per second download speeds for $69.99 a month

Aussie Broadband: Unlimited data and 86Mbps for $99.00 a month