From the moment Brittany Higgins read her damning statement outside court after the trial of her accused rapist Bruce Lehrmann was torpedoed by a rogue juror, it was clear the case would not be re-heard.

Chief Justice Lucy McCallum on October 27 dismissed the 12 jurors in Bruce Lehrmann’s rape trial after one member was found to have brought prohibited documents into the jury room in the ACT Supreme Court.

Lehrmann, an ex-Liberal staffer, had pleaded not guilty to allegedly raping Ms Higgins in the office of former Defence Minister Linda Reynolds at Canberra’s Parliament House after a drunken night out in March 2019.

Following a anti-climactic end to the three-and-a-half-week trial, the case that captured Australia was tentatively rescheduled to be heard from February 20.

Ms Higgins had tears in her eyes as she left the court that morning, flanked by her boyfriend David Sharaz and supporter Heidi Yates, and delivered an emotionally-charged speech that was broadcast nationwide on live TV.

The speech was laden with potentially contemptuous remarks about the way she believed she was treated by the justice system, and how she chose to tell ‘the truth’ about her alleged rape.

Ms Higgins cried as she read her statement to reporters outside the ACT Supreme Court as she said her life has been ‘publicly scrutinised, open for the world to see’

‘Today’s outcome does not change that truth. When I did speak up, I never fully understood how asymmetrical the criminal justice system is, but I do now.’

Although broadcast, much of what she said outside the court could not be published because it could have biased a future jury against Lehrmann, making it impossible for him to get a fair trial.

Furthermore, in the hours after the emotional speech, Lehrmann’s defence barrister Steve Whybrow confirmed he had referred her comments to the Federal Police and Chief Justice Lucy McCallum.

‘When we left court this morning, I indicated to the gathered media that given this matter was ongoing and a date of 20 February 2023 had been fixed for any retrial, it would be both inappropriate and irresponsible to make any further comment at this stage,’ he said. 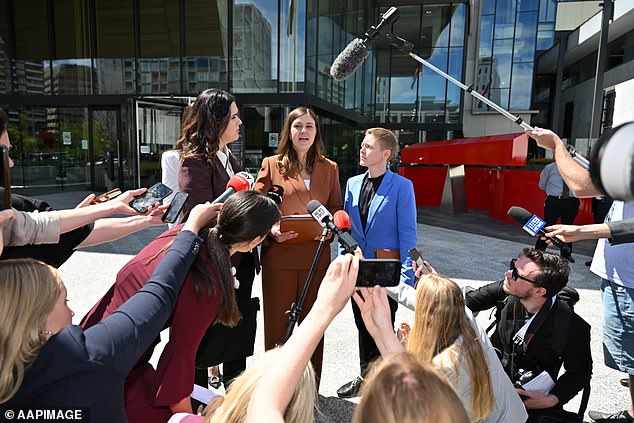 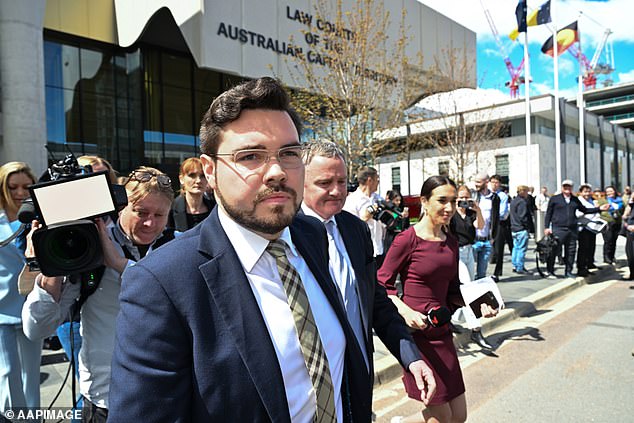 In another dramatic twist, the ACT’s public prosecutor Shane Drumgold announced on Friday morning that a second trial would not go ahead due to Ms Higgins’ mental health.

‘I’ve made the difficult decision that it is no longer in the public interest to pursue a prosecution, at the risk of the complainant’s life,’ he said.

Mr Drumgold added: ‘When I first examined the brief of evidence, I found a clear view that there was a reasonable prospect of conviction.

‘And this is a view that I still hold today.’

Immediately after Mr Drumgold’s statement, Ms Higgins’ friend Emma Webster released a statement to say she had been admitted to a Queensland hospital.

‘She is getting the treatment and support she needs. The last couple of years have been difficult and unrelenting.

‘While it’s disappointing the trial has ended this way, Brittany Higgins’ health and safety must always come first.

‘Brittany is extremely grateful for all the support she has received, particularly from our mental health care workers.’ 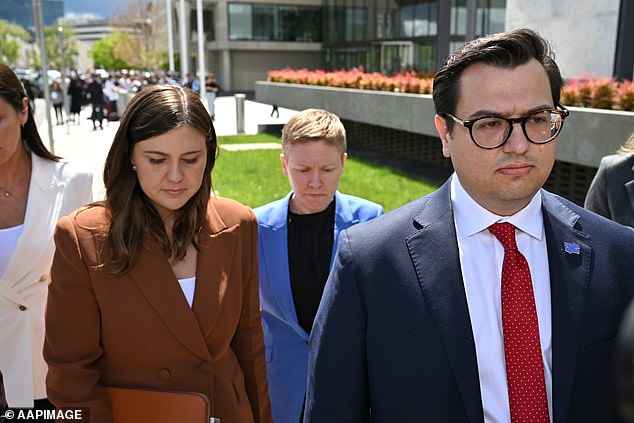 During the trial, Ms Higgins was reduced to tears on a daily basis while she was on the stand during cross-examination.

She was grilled over the night of the alleged incident and challenged about questions surrounding her lucrative book deal, the dress she wore on the evening and whether she attended a doctor’s appointment.

Ms Higgins revealed she had secured a $325,000 book deal arranged for her by TV personality Lisa Wilkinson’s husband Peter FitzSimons in March 2021, which would shed light on her experience.

Ms Higgins agreed with Mr Whybrow that she started outlining the chapters for the book before she made a formal statement to police.

She later admitted to the jury that she was ‘clearly wrong’ when she had said she kept the dress she was allegedly raped in stashed under her bed for six months – ‘untouched and uncleaned’.

Ms Higgins was confronted with a photo showing her wearing the same white cocktail number to a birthday party, some two months after the alleged incident.

She also blew up in court when Mr Whybrow put to her that she had made up doctors appointments to ‘bolster’ her story. 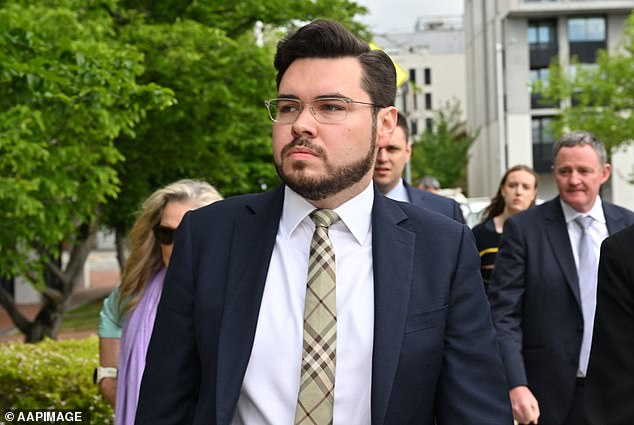 Bruce Lehrmann arrives at the ACT Supreme Court in Canberra, Thursday, October 27 – before the case was abaondoned

‘You are so incorrect.

‘I don’t know if you’ve ever been through a trauma before… it’s confronting, it is a very hard thing to do. I was bed bound, I was doing my best. I completely reject everything you’re saying.’

The trial was originally expected to stretch between four and six weeks, however, after a long list of witnesses were culled from giving evidence, proceedings were significantly cut down to 12 days.

Then following five days of deliberations, the bombshell revelation came the trial would be aborted due to juror ‘misconduct’.

A member of the jury brought prohibited reading material – an academic study about false rape allegations – into the courtroom despite being warned  17 times times by the judge not to do just that.

‘Today’s outcome does not change that truth. When I did speak up, I never fully understood how asymmetrical the criminal justice system is, but I do now.

‘I was required to tell the truth under oath for over a week in the witness stand and was cross-examined at length. He was afforded the choice of staying silent in court, head down in a notebook, completely detached. He never faced one question in court about his story and the criminal charges.

‘My life has been publicly scrutinised, open for the world to see. His was not. Many of you in the media have been called out for labelling the last few weeks ‘the Higgins trial’. But I don’t blame you because it’s very clear who has been on trial. He hasn’t had to be publicly accountable for his actions or any part of his story.

‘This is the reality of how complainants in sexual assault cases are treated. Their lives are torn apart, their friends and families are called to the witness stand and the accused has the legal right to say absolutely nothing.

‘Like all women who experience sexual violence, I knew the odds were stacked against me. The criminal justice system has long failed to deliver outcomes to victims of sexual assault.

‘In the ACT during 2020, only 16 per cent of sexual offences reported to police resulted in a charge. Only half of that number again resulted in a conviction. That is to our national shame.

‘I want to thank the other women who came forward and shared their own experiences. I believe you. You were with me every day I walked into that courtroom and faced him.

‘I want to thank the people of Australia who have rallied behind me, those who chose to attend the March for Justice, and I want to thank the workers and Canberra’s healthcare system without whom I literally wouldn’t be here today.

‘Again, thank you to the DPP, my family, my friends, my mum, Heidi Yates the ACT Victims of Crime Commissioner, Leon Zwier, who I have stolen from his family for a really long time, Emma Webster and my partner, David.

‘Thank you to the court and its officers who treated me with such care and respect while I’ve been here.’