Temperatures in the U.S. scorch in the 90s after the nation’s first heat wave hit

Soaking up the sun! Temperatures in the U.S. scorch in the 90s and break 100 in South Dakota and Arizona but storms are expected to rumble through northern states this week

Americans are taking to the streets to soak up the summer sun as scorching temperatures bake the nation from the west to east coast.

On Sunday for WorldPride in New York thousands took to the streets to enjoy the 84-degree weather as temperatures soared to 90 in Washington D.C. and 95 in Charlotte, North Carolina.

This weekend saw 90-degree weather in the central Plains, upper Midwest and mid-Atlantic while South Dakota, Arizona and Nevada broke 100 degrees on Saturday and Sunday.

In California it’s so hot that mussels are cooking inside of their shells as temperatures break 100F in some regions.

Americans are taking to the streets to soak up the summer sun as a heat wave hits the country, baking the nation from the west to east coast. A boy floats in water on Friday in Boston 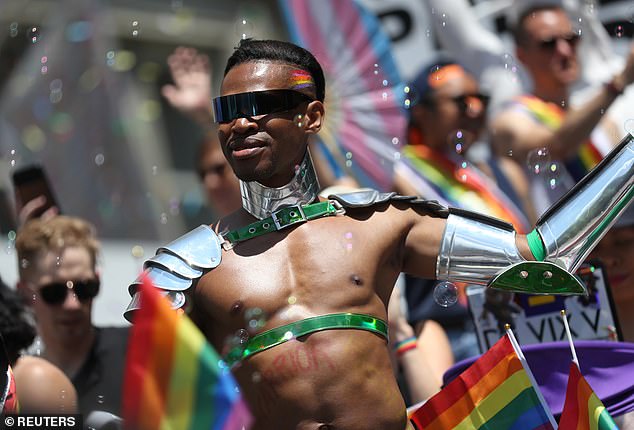 Enjoying the heat! In New York WordPride participants celebrated in the mid-80s weather 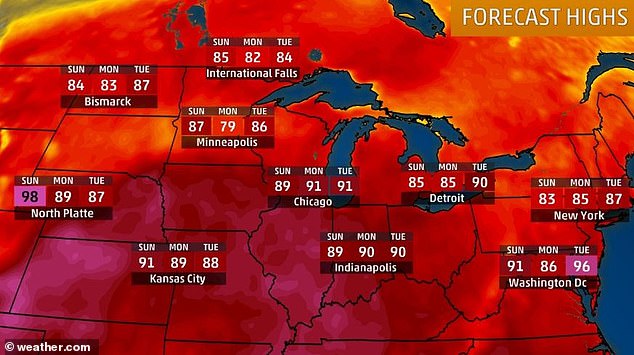 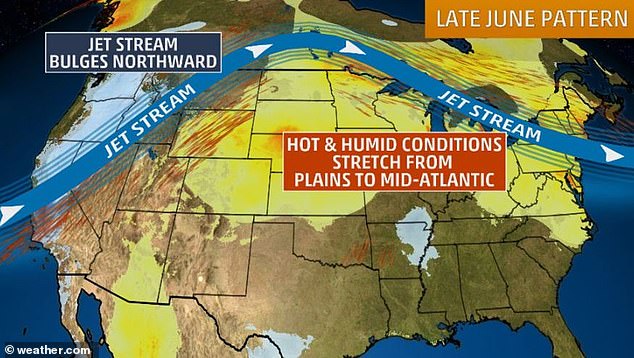 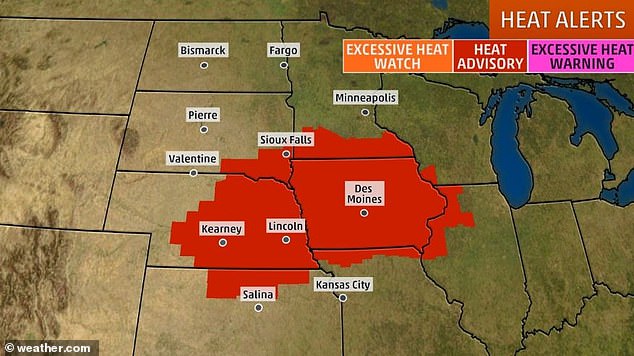 On Sunday heat advisories were issued for Des Moines, Iowa and Omaha, Nebraska

Mussels located in Bodega Bar in northern California have roasted from where they sit in the low tides under the relentlessly beating sun throughout the month of June, marking the largest die-off of mussels in at least 15 years in the Bay. 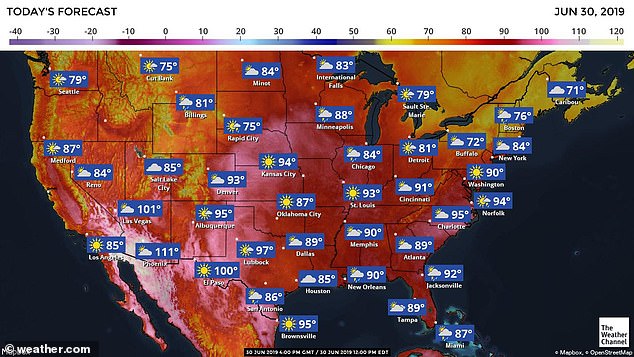 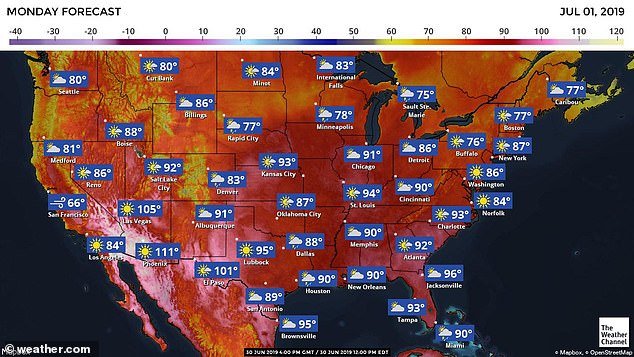 Monday’s forecast will break 100 in Nevada, Arizona and Texas while southern and midwestern cities will hit the 90s and the east coast will sit in the 80s 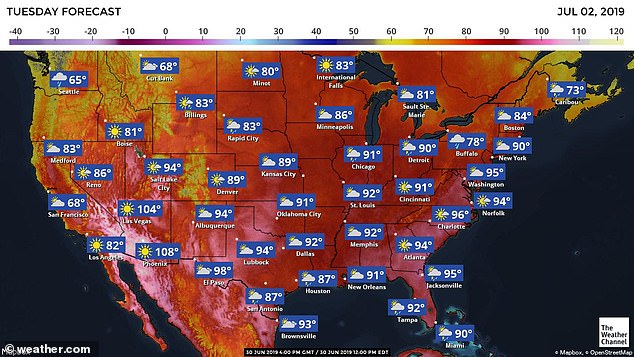 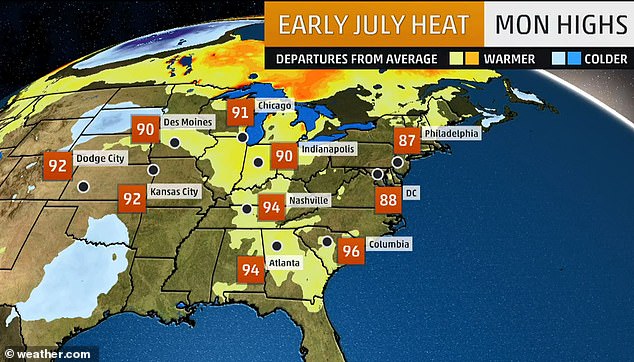 The Midwest is feeling the heat too with temperatures up to 15 degrees above average. Temperatures in Chicago, St. Louis and Kansas City are forecast to sit in the 90s into early next week.

Severe weather threat have been released for storms that could hit central states like Illinois, Indiana, South Dakota, Wisconsin and Minnesota. The heavy storms are expected to bring one to three inches of rain, according to Weather.com.

AccuWeather meteorologist Ryan Adamson said: ‘With the hot, stagnant air remaining parked over the area for several days, air quality will begin to deteriorate by the end of the week and into the weekend.

‘There will also not be too much cooling at night, especially in urban areas, resulting in higher electric bills as cooling demand increases around the clock.’

The high temperatures will cool on Sunday but will bounce back through the middle of this week going in July 4. 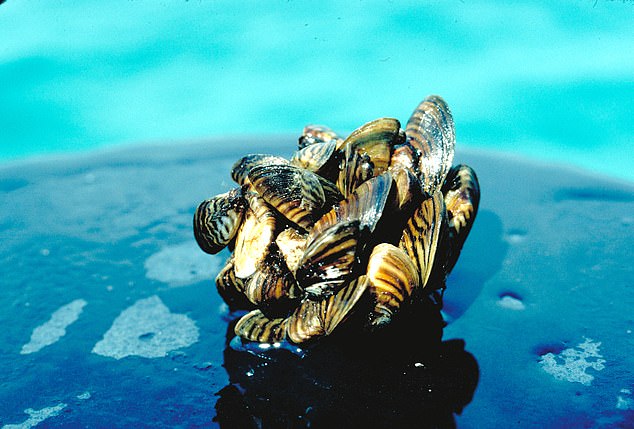 In Bodega Bay, California its so hot that mussels are cooking alive as temperatures reach over 100F 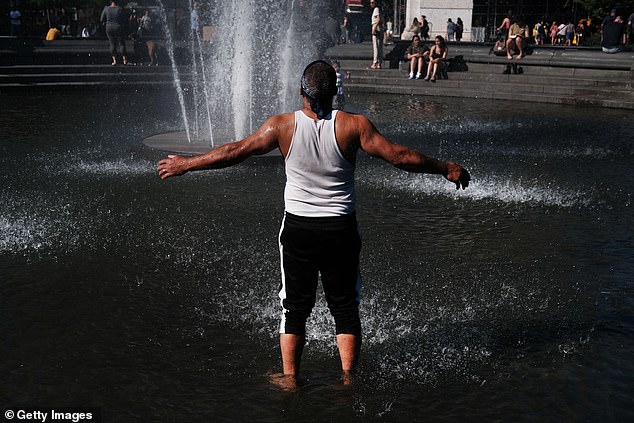 People cool off in a fountain in Washington Square Park on a hot afternoon in Manhattan in Thursday. Much of the East Coast has been experiencing days of heat and bright sun 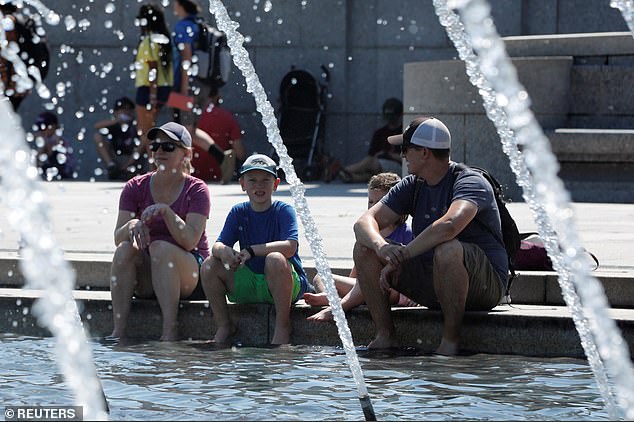 Tourists cool off at a fountain during hot weather at the Word War Two Memorial in Washington, DC on Thursday