TEMPLETON EMERGING MARKETS INVESTMENT TRUST: After a year to forget, manager Andrew Ness is convinced better times are ahead

Investment trust Templeton Emerging Markets has had a year to forget, resulting in shareholders seeing the value of their shares fall by more than 20 per cent.

Yet Andrew Ness, one of two managers overseeing the trust’s £1.73billion portfolio, is convinced better times are around the corner.

‘Emerging markets are under-owned by investors and under-loved, but I believe they are in a good place to capture any upside once the world economy starts moving forward again and inflation abates,’ he says.

Ness believes many emerging market economies and companies are in better shape than their developed counterparts because they are less indebted.

Companies do not have masses of debt on their balance sheets, while the governments of most emerging economies do not have the hangover of debt that their counterparts in the developed world have from dealing with the pandemic.

Although the trust is a global emerging markets fund, its portfolio is skewed towards the Far East.

The share prices of some of these Far Eastern holdings have been hit by the slowdown in the world economy and the recent flare-up between China and Taiwan in the wake of the decision by Nancy Pelosi (speaker of the US House of Representatives) to pay Taiwan a flying visit.

The trust’s biggest holding, accounting for 10.8 per cent of the portfolio’s assets, is chip maker Taiwan Semiconductor Manufacturing Company (TSMC). Its share price is down 18 per cent this year.

While Ness says he has little idea how the current conflict will play out, he does not believe it will lead to military confrontation between China and the US.

President Xi Jinping, he argues, has too much to lose as he strives to make the People’s Republic of China self-sufficient and a ‘trusted trading partner with the rest of the world’.

On how the world economy will fare as inflation rages, Ness is unsure. Although an economist, he says ‘predicting economic outcomes is difficult’.

He adds: ‘As managers, what is key is building a portfolio comprising resilient businesses that are profitable and which can deal with any economic outcome.’ He says 60 per cent of the companies the trust is invested in have had their earnings upgraded this year. 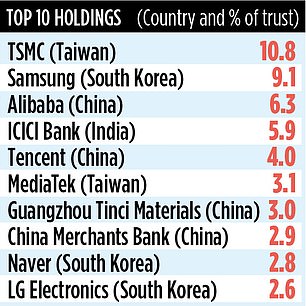 Despite the trust’s recent poor performance, Ness believes the emphasis on research – it has 70 investment professionals on the ground searching for new investment ideas – will ultimately reap rewards for shareholders.

‘It’s why our portfolio is different to those of many rival funds,’ he adds. ‘We invest across the board, whether it’s in world-leading businesses such as TSMC or Samsung in South Korea – or less familiar businesses.’

Among its top holdings are stakes in MediaTek, a Taiwanese mobile phone chip maker, and Naver – South Korea’s ‘answer to Amazon’.

Ness, who has spent nearly four years running the portfolio with Chetan Sehgal, says he never forgets the importance of his work for investors’ finances.

Last month, he met some of the trust’s shareholders at the annual meeting in London.

He says: ‘Our purpose as asset managers is to make people’s lives better – to enable them to fulfil their aspirations. Through our actions, we can change people’s lives for the better. We should never forget that.’

The trust’s stock market identification code is BKPG0S0 and the ticker is TEM. Ongoing charges are a tad under one per cent.