Ten migrants have jumped into the sea in a desperate attempt to swim to the Italian island of Lampedusa amid a stand-off with the Italian government.

One man threw himself into the sea earlier today, while nine more jumped into the waters later on, according to humanitarian group Open Arms.

Meanwhile a woman on board suffered a panic attack.

The migrants aboard the Spanish rescue boat ‘Open Arms’ were ‘desperately trying to reach the coast of Lampedusa’, according to the group.

They said the Italian coastguard and its own crew are trying to rescue them, describing the situation as ‘out of control’.

Migrants swim after jumping off Spanish rescue ship Open Arms, close to the Italian shore of Lampedusa on August 20 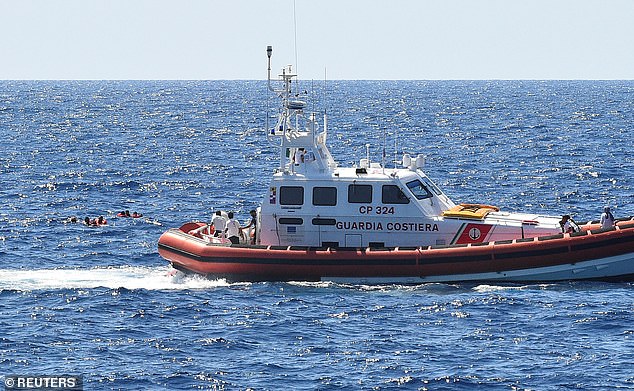 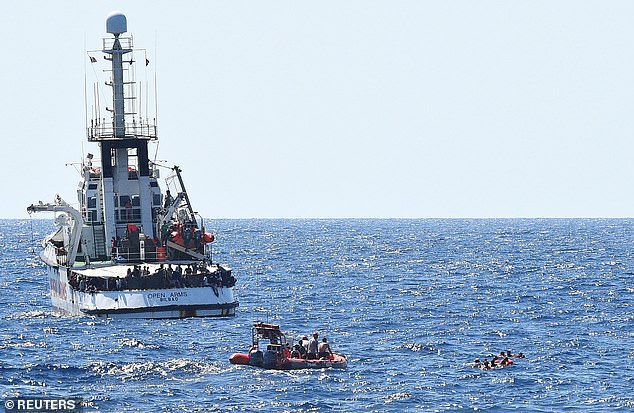 Migrants swim after jumping off Spanish rescue ship Open Arms, close to the Italian shore of Lampedusa on August 20

Video showed people wearing orange life vests floating in the sea with a coastguard vessel nearby and rubber dinghies trying to reach them.

The Spanish rescue boat has been caught in a stalemate with the Italian government for 19 days. 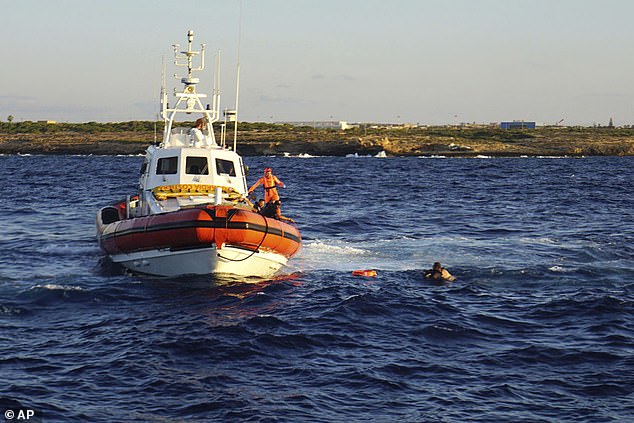 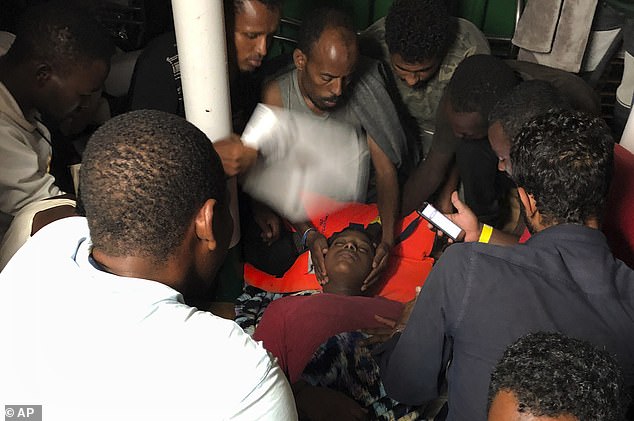 A woman is assisted following a panic attack onboard the OPen Arms vessel on August 20.

The Italian government has faced backlash after refusing to allow the Spanish ship access to a safe port even though six other European nations have offered to take the migrants.

The boat picked up a total of 147 stranded migrants off the coast of Libya after it set sail on a 26-day search and rescue mission. 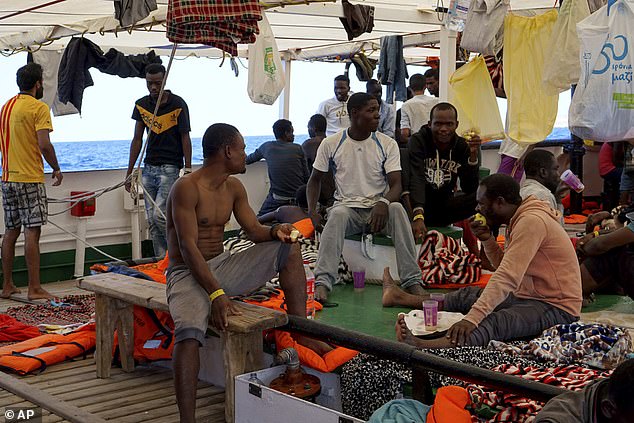 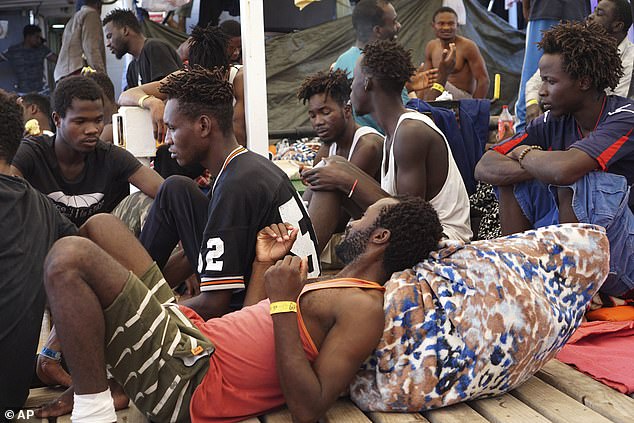 In the past few days a total of 40 migrants have been evacuated from the boat, some due to declining health and the rest were minors, leaving 107 still on board.

Last weekend, Salvini gave permission for 27 unaccompanied minors to leave the migrant rescue ship after two weeks at sea, after Premier Giuseppe Conte had written a letter to him demanding he do so.

But he wrote back Saturday with a three-page missive of his own saying he would, stressing that the move was Conte’s choice and that it did not set a precedent. 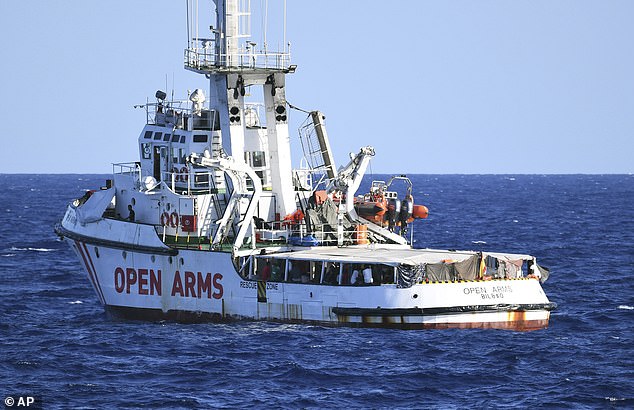 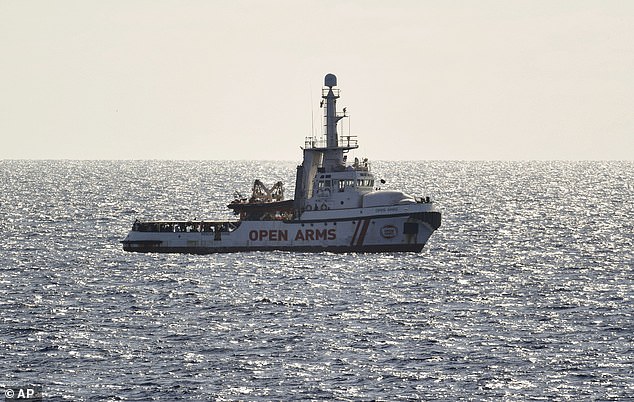 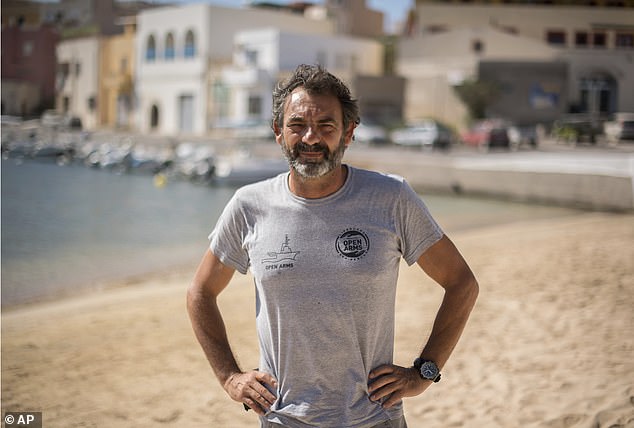 The minors were transferred Saturday to an Italian border patrol boat for disembarkation and processing on the Sicilian island of Lampedusa. The fate of the other migrants still aboard the Open Arms off Lampedusa remains uncertain.

The standoff has laid bare the split between Salvini’s anti-migrant League and the 5-Star Movement, which together govern Italy.

Salvini is seeking to end Conte’s populist coalition with a no-confidence vote and early election that Salvini hopes will give him the premiership. 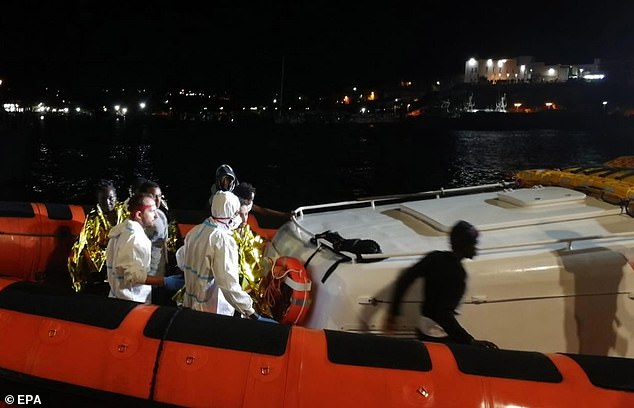 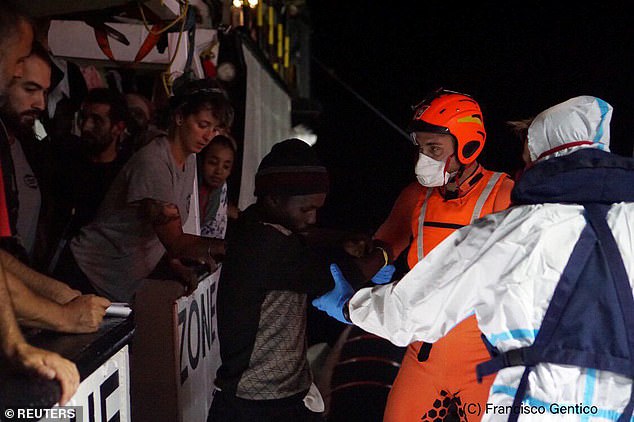 Migrants disembark Open Arms rescue ship on August 19. In the past few days a total of 40 migrants have been evacuated from the boat, some due to declining health and the rest were minors

Open Arms had won a legal battle to enter Italy’s territorial waters, and Conte had secured offers from Spain and five other European Union nations to take the migrants in.

But the ship remains off the coast because of Salvini’s policy prohibiting humanitarian aid groups from docking.

The Open Arms captain had previously warned Italian authorities that the crew of 17 could no longer control the situation on board, as frustrated migrants resort to fighting.

Open Arms chief Oscar Camps said Saturday that tensions were rising and fights breaking out that threatened the safety of all on board.