If you don’t want to mark your match-up the same way as every other loved-up pair for Valentine’s Day, pay close attention.

Here we’ve rounded up ten of the lesser-known places linked to love around the globe, from bizarre kissing statues in Georgia to the I Love You Wall in Paris.

The Tunnel of Love, Klevan, Ukraine

You can take day trips to the Tunnel of Love from both Lviv and Kiev, although the closest city is Rivne. Legend says that couples who make a wish while walking through the tunnel will have it granted

Located in Klevan, Ukraine, the Tunnel of Love is an area of disused railway track that’s surrounded by archways made from the boughs of green trees.

Visitors can take day trips here from both Lviv and Kiev and walk along the line for several miles, although most visitors just do a kilometre or two.

Local legend says that couples who make a wish while walking through the tunnel will have it granted. 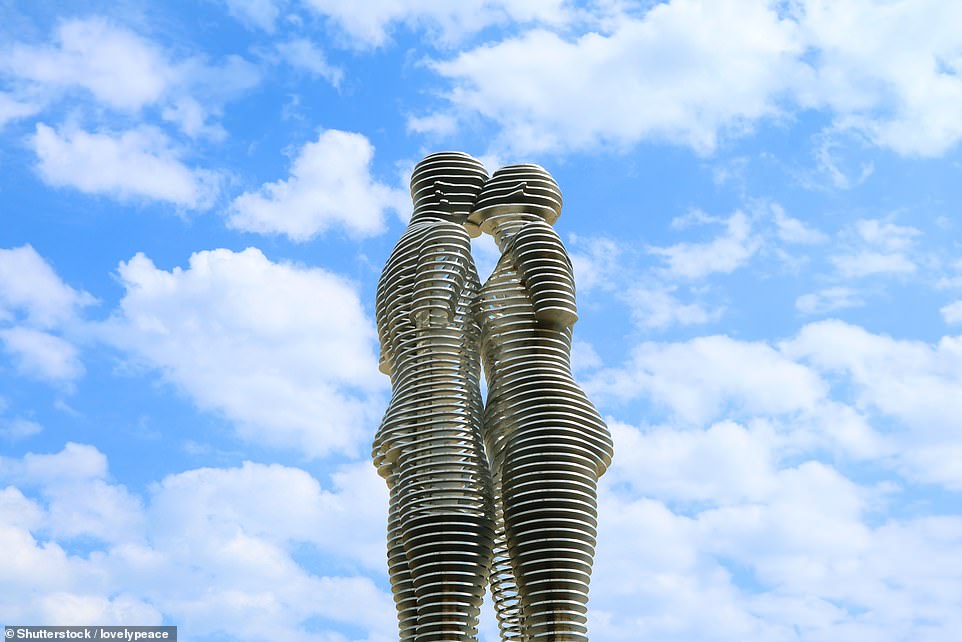 One TripAdvisor reviewer described the Ali and Nino sculpture, pictured, in the seaside city of Batumi, Georgia, as being ‘romantic to the point of tears’

You’ll find the Ali and Nino sculpture in the seaside city of Batumi in Georgia, which overlooks the Black Sea.

These eight-metre-tall (26ft) figures, created by sculptor Tamara Kvesitadze, move throughout the day. They start apart, before moving together for a kiss and they eventually pass through each other.

One TripAdvisor reviewer described the statue as being ‘romantic to the point of tears’. 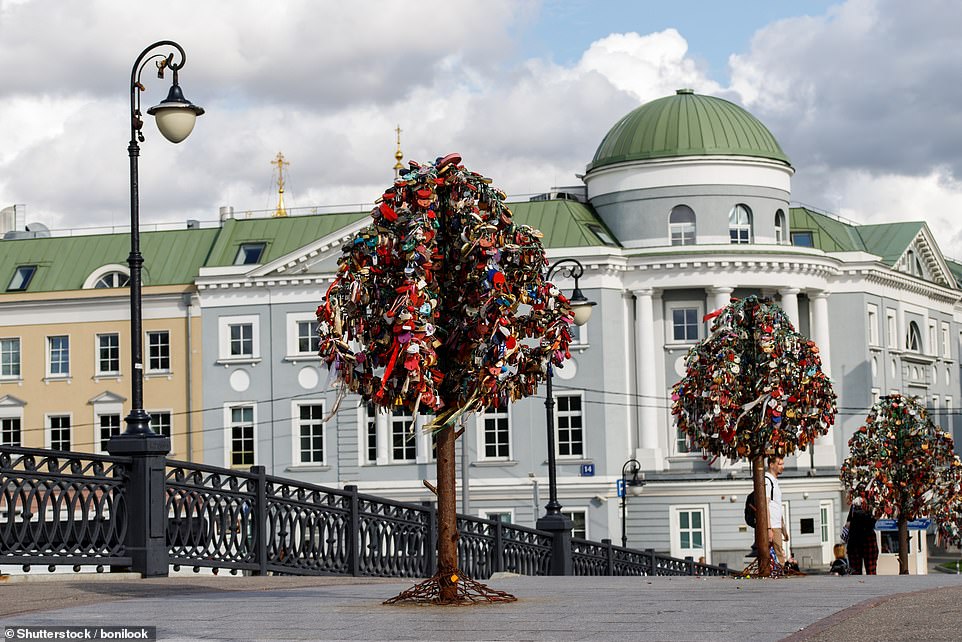 The Kissing Bridge in Moscow crosses the Moskva River, a 20-minute walk from Red Square

The Luzhkov Bridge, a 20-minute walk from Red Square in Moscow, is lined with metal tree structures that are covered in padlocks with the names of lovers on them.

The trees were installed in 2017 and the bridge has since become known as The Bridge of Kisses.

It’s not uncommon to see newlyweds posing for photos here as they attach their own locks to the trees on their big days. 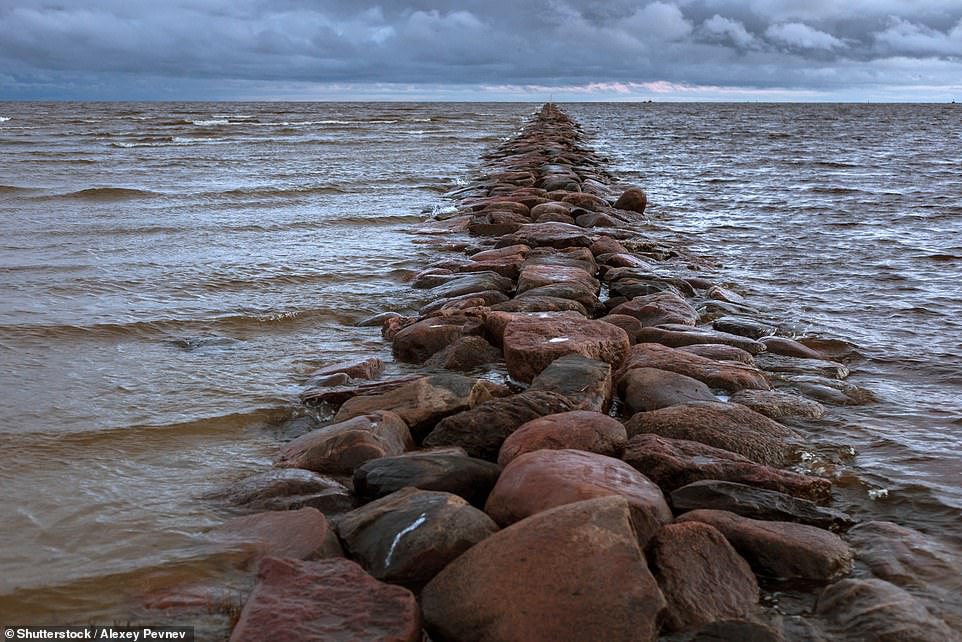 Local legend says that if you walk along Pärnu Seawall holding hands with your loved one and kiss at the end, you’ll be together forever

Located on the west coast of Estonia, a two-hour drive south from Tallinn, Pärnu is Estonia’s fourth-largest city.

The seawall there is one of the symbols of the city and local legend says that if you walk along it holding hands with your loved one and kiss at the end, you’ll be together forever.

Visitors have to walk along it when the tide is right, but sometimes it’s possible to have a picnic at the end. 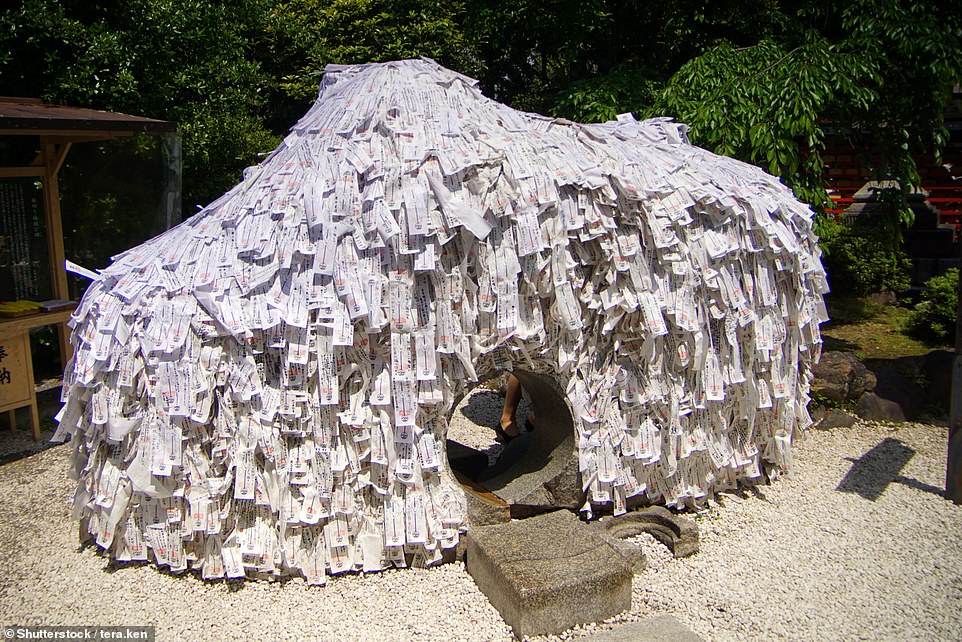 The Yasui Konpira-gu Shrine takes the form of a massive rock with a hole in the middle. It’s located in the Gion geisha and entertainment district of Kyoto in Japan.

Thousands of people visit this shrine every year in the hope of initiating a relationship or breaking up a bad one.

The ritual for doing this involves writing a wish on a piece of white paper, crawling through the hole and back again, then pinning the wish onto the outside of the shrine with all the others.

Alley of the Kiss, Guanajuato, Mexico 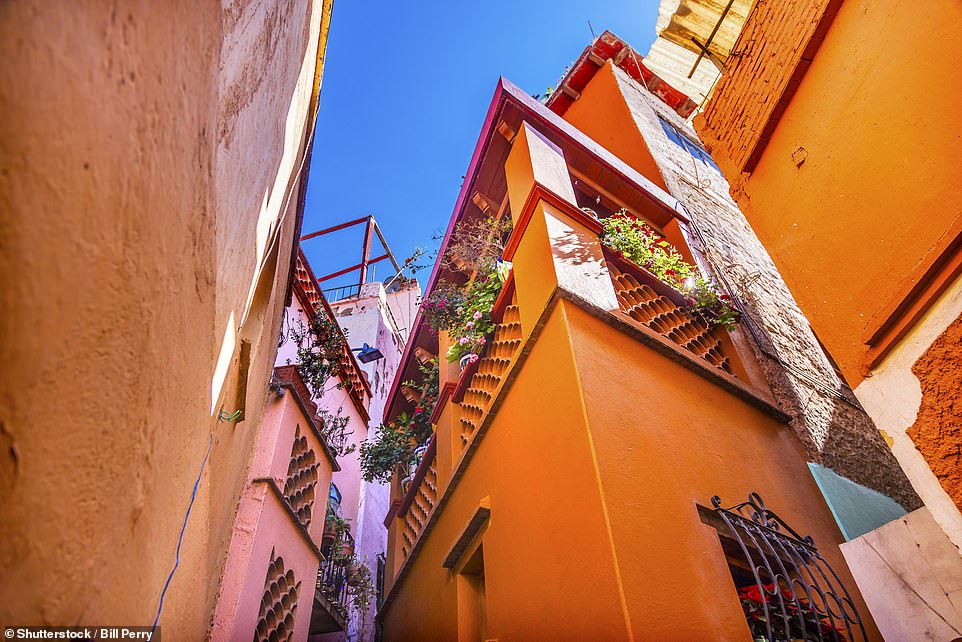 The sunrise-coloured El Callejon del Beso alley in Guanajuato, central Mexico, is also known as The Alley of the Kiss.

According to local legend, the narrow alley was the setting for a real-life Romeo and Juliet story.

The myth goes that two starstruck lovers from feuding families would meet on the balconies on opposite sides of the alley at midnight and lean over for kisses. Then, one night, they were caught by the girl’s father, and both lovers fell to their deaths.

It’s said that the ghosts of the young lovers bless couples with lifelong happiness if they kiss beneath the balconies today.

A Love Letter for You, West Philadelphia 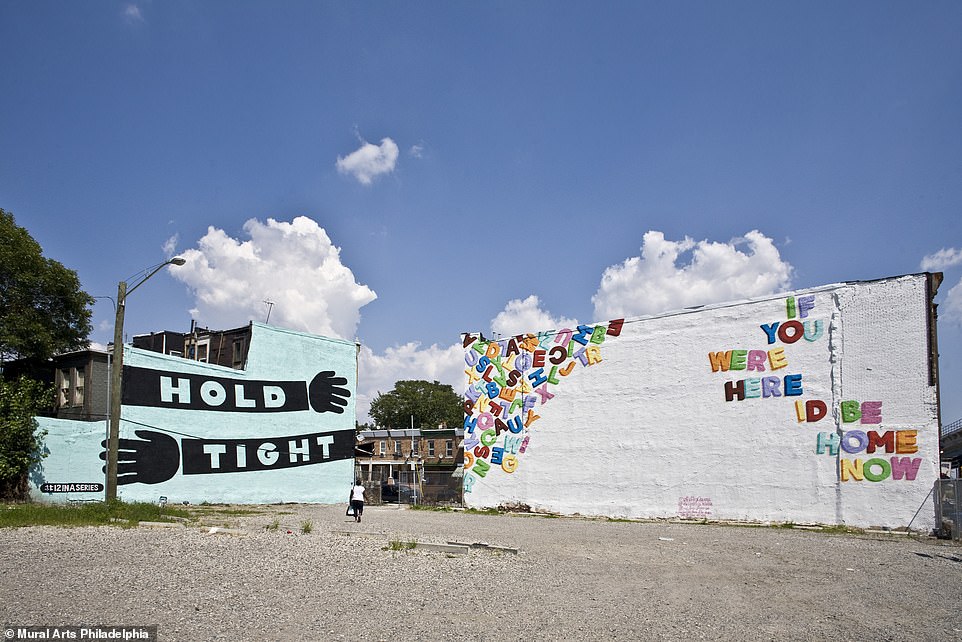 Thanks to a project by Mural Arts Philadelphia, the rooftops between 45th and 63rd Street along the Market Street corridor in West Philadelphia are home to more than 50 love-linked murals.

Collectively, the murals, by artist Steve Powers, make up a love letter from one lover to another. They say everything from ‘I love you’ to ‘Your everafter is all I’m after’.

The murals are best viewed from a train carriage on the Market Frankford Line. Visitors can take their partners on the journey to read the love letter together as they travel. Guided train tours are also available at certain times of the year. 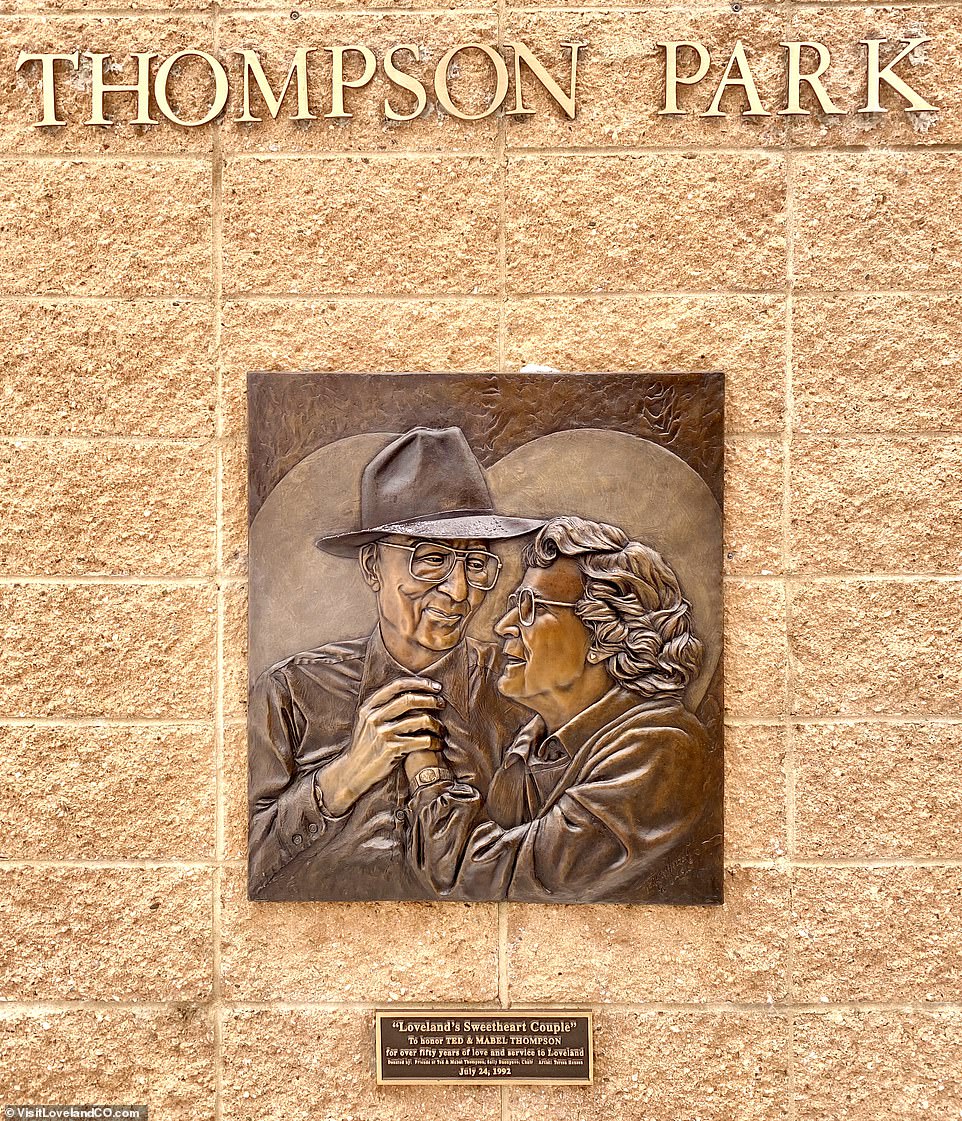 Pictured is the plaque in Thompson Park, Colorado, that depicts the town’s Sweetheart Couple holding hands and looking into each other’s eyes

This couple were the founders of the town’s Valentine’s Re-mailing Programme, which sees people from all over the USA send their Valentine’s cards to the Loveland Chamber of Commerce to be stamped with a special poem before being forwarded on to the intended Valentine. 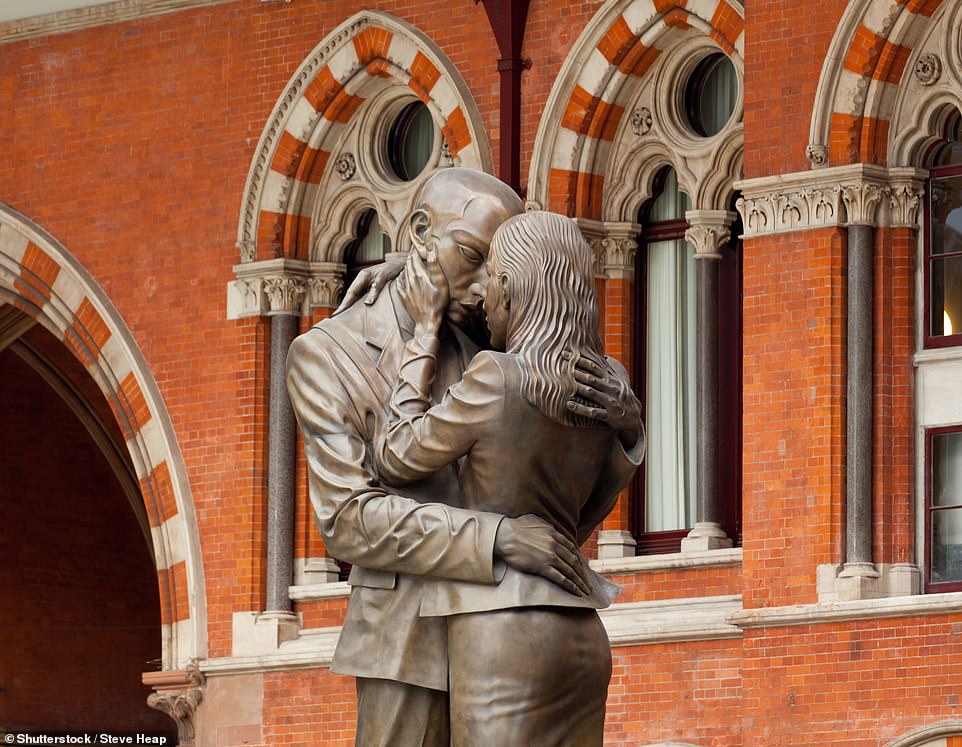 Located in London’s St Pancras Station, the nine-metre-tall (29.5ft) Meeting Place sculpture once featured in the list of the World’s Most Romantic Places, as compiled by Lonely Planet.

It’s completely free to see and couples who really want to celebrate their relationships can pop into the Champagne bar that’s right next to it.

The I Love You Wall, Paris 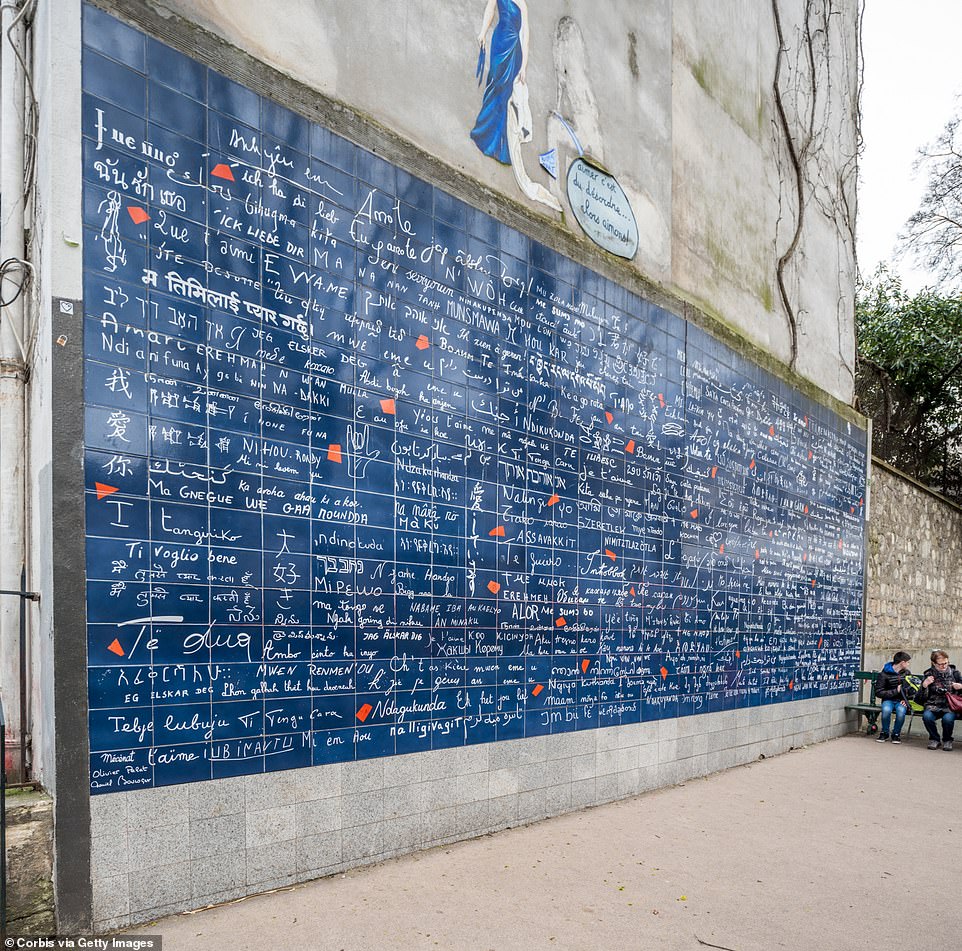 The Le mur des je t’aime aka The I Love You Wall, pictured, which can be found a five-minute walk from the Place du Tertre in Paris

The Le Mur Des Je T’aime aka The I Love You Wall can be found a five-minute walk from the Place du Tertre in the Montmartre district of Paris.

It’s a 40-square-metre (430-square-foot) wall of 612 blue tiles that are inscribed with the words for ‘I love you’ in 250 languages, including Navajo and Inuit.

Unlike the city’s more famous landmark, the Eiffel Tower, the Wall of Love is completely free to see and couples are often seen kissing next to it.