Nationwide, coronavirus infection numbers continue to drop, but a small number of states are not seeing any improvements.

Ten states, mainly in the South, have either seen their caseloads over the month of May get worse or hold steady.

Over the last seven days, the average of new cases between May 19 and May 26 had shot up 150 percent in West Virginia from 19.7 per week to 49.3 per week, Axios reported.

In Arkansas, the average has spiked 66 percent from 108.4 new coronavirus cases per week to 179.6 per week.

Many of these states either never imposed stay-at-home orders or were quick to reopen in spite of public health officials’ concerns.

Meanwhile, previous coronavirus hotspots including New York and New Jersey, are reporting a drop in their infection numbers. 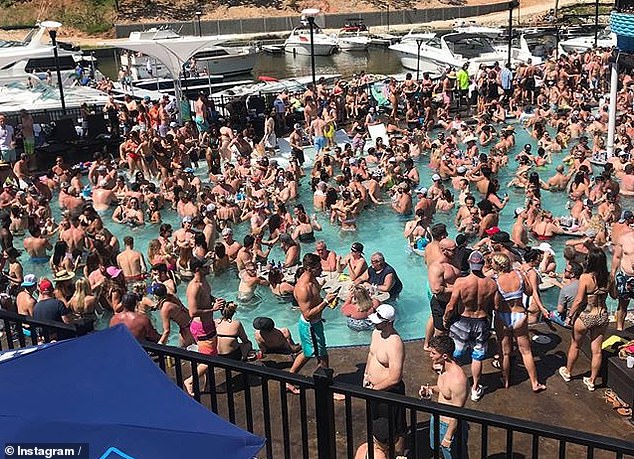 Many of these states either never imposed stay-at-home orders or were quick to reopen in spite of public health officials’ concerns. Pictured: People party at Backwater Jacks Bar & Grill in the Ozarks, Missouri, May 24 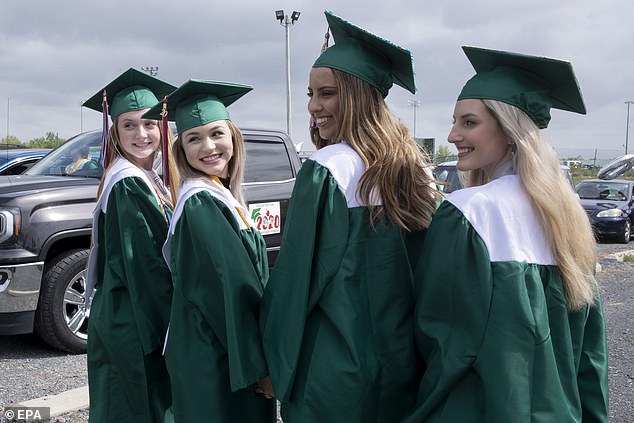 West Virginia saw a 150 percent spike in cases over the last week and Arkansas saw a 66 percent surge – the two highest across the US. Pictured: Members of the Musselman High School Class of 2020 pose for photographs before the start of a commencement parade in Inwood, West Virginia, May 21

West Virginia saw the biggest spike in weekly cases, according to data from both the health department and the COVID Tracking Project.

The state was the last US state to report cases of COVID-19, the highly-infectious disease caused by the virus.

The R0 (R-naught value) for the Mountain State –  a mathematical term that indicates how contagious an infectious disease is – currently at 1.

The numbers that follows ‘R’ tells you the average number of people who will contract the disease from an infected person.

At midweek, the R-naught value for West Virginia was 7.05, particularly after more than 100 cases were confirmed at a state prison, reported WV Metro News.

Following the Centers for Disease Control and Prevention (CDC) guidance, under all circumstances, the following precautions should be followed by restaurants providing dine-in:

Consider assigning duties to vulnerable workers that minimize their contact with customers and other employees.

Develop standards for the use of non-medical grade masks or cloth face coverings by employees when near other employees and customers.

Ensure adequate supplies to support healthy hygiene practices for both employees and customers including soap, hand sanitizer with at least 60 percent alcohol (perhaps on every table, if supplies allow), and tissues.

Avoid using or sharing items such as menus, condiments, and any other food. Instead, use disposable or digital menus, single serving condiments, and no-touch trash cans and doors.

Wipe any pens, counters, or hard surfaces between use or customer.

Train all employees in the above safety actions.

However, Gov Jim Justice, a Republican, says he is satisfied with the way the state’s numbers stand.

‘West Virginia, keep on doing it. You’re doing great. Proud of you,’ Justice said at the end of a Thursday press conference

He attributed the rise in cases to the 105 confirmed infections among inmates at Huttonsville Correctional Center in Randolph County.

Justice has now pledged to test all staff and inmates in the state’s corrections system, which has been severely lacking.

WV Metro News reports that just 43 inmates at West Virginia’s other 10 prisons aside from Huntsville, had been tested as of Wednesday night. Across the 10 regional jails, only 93 tests had been performed.

The state, despite its rise in infections, has not been as aggressive in reopening with  small businesses that have fewer than 10 employees allowed to reopen as of May 4

Meanwhile, in Arkansas, which saw the second-highest rise in weekly infections, the state also hit another record.

Gov Asa Hutchinson, a Republican, said he doesn’t believe the spike was due to Memorial Day celebrations or businesses reopening businesses.

‘There is a second wave…it’s a combination of expanded information through testing with the spread of the virus in northwest Arkansas,’ he said. 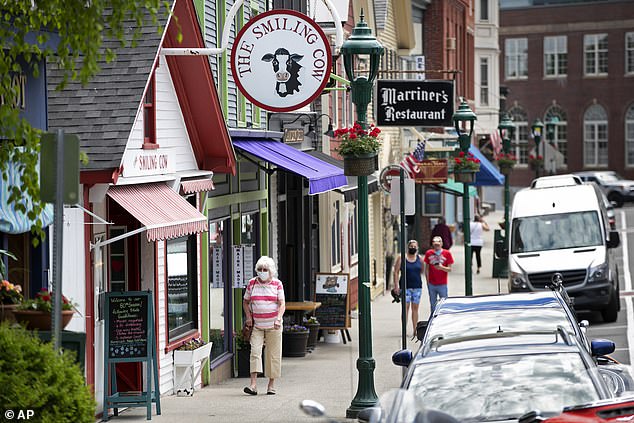 Although active COVID-19 cases and deaths are still increasing in Maine, the state says it has slowed the spread of the virus. Pictured: Shops that cater to tourists are starting to reopen under strict guidelines in Camden, Maine, May 28 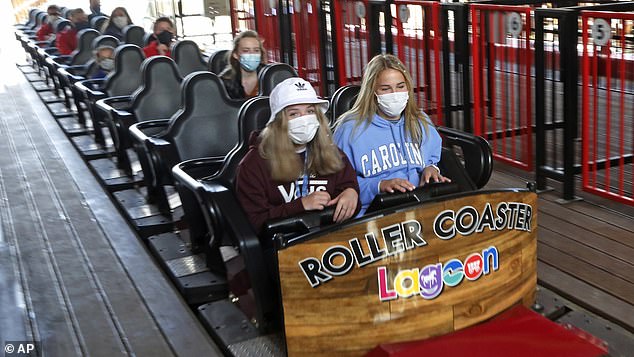 On Thursday, the Utah Department of Health reported the number of cases rose by 215 from Wednesday, the largest single-day COVID-19 case increase. Pictured: People ride the Roller Coaster at Lagoon Amusement Park in Farmington, Utah, May 23 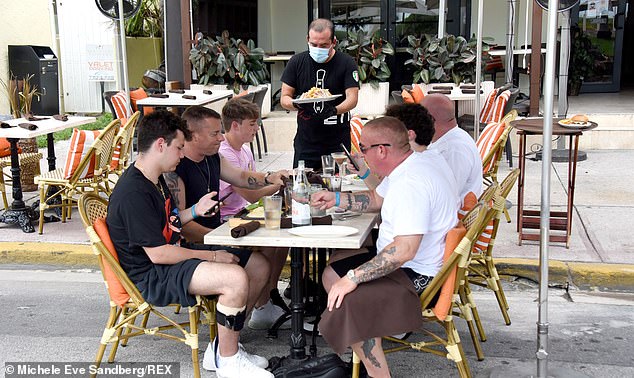 Several southern states have reopened outdoor dining in restaurants. Pictured: People are seen out and about during the Phase 1 opening in South Beach, Florida, May 27

Gov Asa Hutchinson, a Republican, said he doesn’t believe the spike was due to Memorial Day celebrations or businesses reopening businesses.

‘There is a second wave…it’s a combination of expanded information through testing with the spread of the virus in northwest Arkansas,’ he said.

Arkansas is one of the few states that never issued stay-at-home orders leading some residents to be cavalier in their actions.

On Saturday, Hutchinson told reporters that several people who attended a high school swim party had contracted the virus.

‘A high school swim party that I’m sure everybody thought was harmless. They’re young, they’re swimming, they’re just having activity and positive cases resulted from that,’ Hutchinson said, noting the incident was ‘just an encouragement for us to be disciplined in our activities.’

In the state, restaurants reopened starting April 29 while gyms and other facilities reopened on April 30  with hair salon and barber ships resuming service on May 1.

But it’s not only states in the south that are not seeing improvements.

In Maine, coronavirus cases have risen over the last week by 39 percent from about 37.7 per week to 52.6 per week, reported Axios.

On Thursday, the state’s Centers for Disease Control and Prevention reported three new outbreaks of the virus. 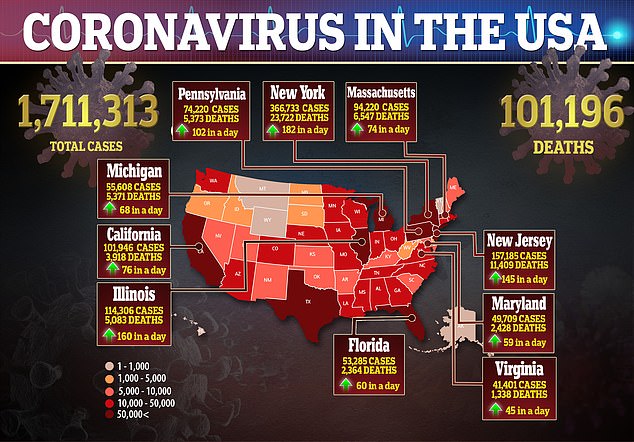 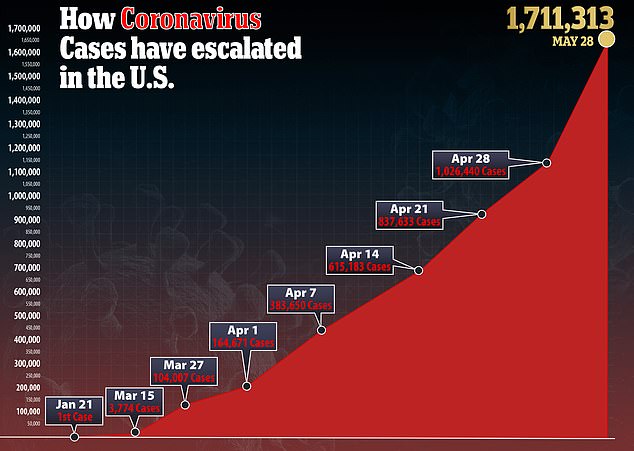 One is at a Procter and Gamble Tambrands facility and another is Happy Haven Home, a home for people with intellectual and developmental disabilities.

Although active COVID-19 cases and deaths are still increasing in Maine, restrictions have been easing.

The state, however, says it has succeeded in slowing the spread of the virus and preventing hospitals from becoming overwhelmed.

Utah, which has also not reported a single week of significant improvement in May, records were also broken.

On Thursday, the Utah Department of Health reported the number of cases increased by 215 from Wednesday.

KSL reported that 41 of 72 residents and 17 healthcare workers have tested positive for the disease, but the facility said no one is critically ill. 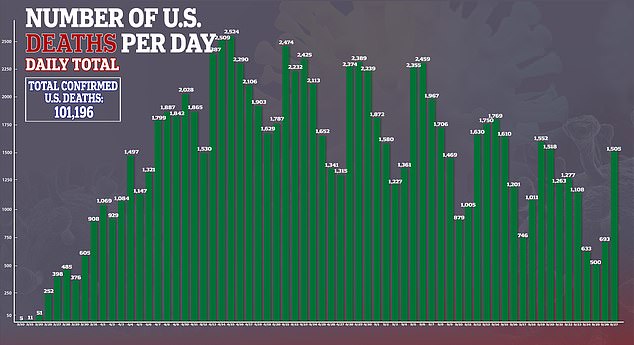 Meanwhile, previous hotspots such as New Jersey and New York have been higher overall numbers, but rates are falling.

Gov Andrew Cuomo said new daily coronavirus cases in New York are now lower than they were at the beginning of the outbreak.

Additionally, daily new hospitalizations and total deaths are at their lowest since mid-March.

In New Jersey, which has the second-most deaths and cases behind New York, Gov Phil Murphy said the state is ‘well past’ its peak.

However, he cautioned that the decrease in numbers doesn’t mean the state should quickly reopen.

‘For everybody who says: “Open the thing up tomorrow, let’s turn all the lights on, let’s get back to normal,” we had 365 folks going into the hospital yesterday,’ the governor said on Thursday.

‘We’ve got to make sure we are watching this like a hawk…We’re still digging out of this.’