US tennis star Nicole Gibbs has had to pull out of the French Open after a routine dentist appointment led to a cancer diagnosis.

Gibbs, 26, was getting her teeth checked last month when her dentist asked her about a growth on the roof of her mouth, which has been there for years, she told TODAY.

Gibbs’s dentist encouraged her to get a biopsy, and results showed that she had a rare form of mouth cancer.

The 26-year-old is now putting her career on hold, preparing to undergo surgery on Friday to remove the tumor, and she says she wants her story to encourage others to get regular dental care and to advocate for themselves if they believe something is wrong.

US women’s tennis star Nicole Gibbs, 26, went to the dentist one month ago and he found a growth on the roof of her mouth. Pictured: Gibbs during the qualifying round of the 2018 Miami Open, March 2018 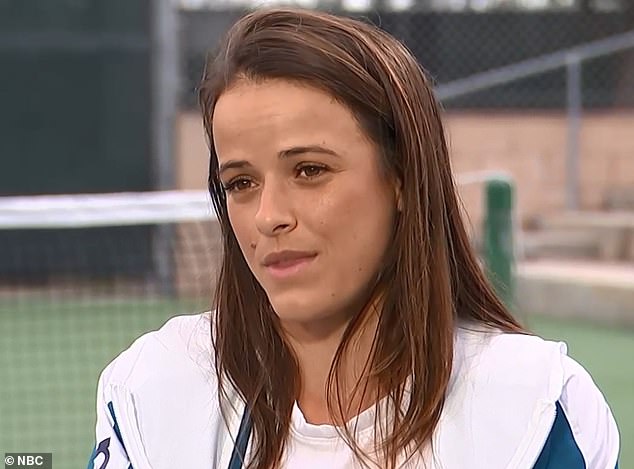 She said the growth had been there for years but he encouraged her to get it biopsied. Pictured: Gibbs during an interview on the TODAY show

‘I was just really fortunate that my dentist, Dr Kevin Lee, was able to identify it correctly as something that should not be there, and he encouraged me to get a biopsy and it came back as positive for a form of cancer,’ she told TODAY.

‘It was definitely earth-shattering for the first few days where we were still trying to figure out what’s what exactly.’

Salivary gland cancer is a rare form of cancer in which malignant cells form in the tissues of the salivary glands, which make saliva and release it into the mouth.

Gibbs specifically has a type of tumor known as a mucoepidermoid carcinoma, the most common type of salivary gland cancer.

These tumors usually occur in the minor salivary glands that are too small to see without a microscope.

According to the National Cancer Institute, cancers of the minor salivary glands most often begin in the roof of the mouth – as occurred in Gibbs’s case.

They are typically low grade, meaning the cancer grows slowly and usually has a good prognosis.

Salivary gland cancers make up less than one percent of all cancers in the US and occur in about one per 100,000 Americans each year, according to the American Cancer Society.

The five-year relative survival rate for all types and stages of salivary gland cancer is about 72 percent.

‘I think it’s a good reminder for self-advocacy. I think we tend to know if there’s something that’s off or wrong,’ Gibbs said. 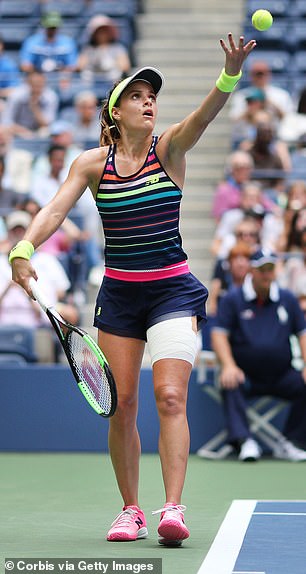 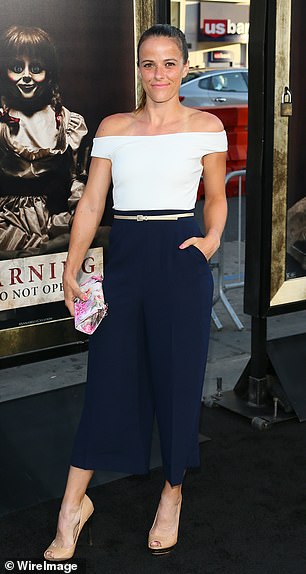 Results show Gibbs (left and right) had salivary gland cancer, a rare form of cancer that forms in the tissues of the glands that make saliva. She is undergoing surgery on Friday and will likely not need additional treatment 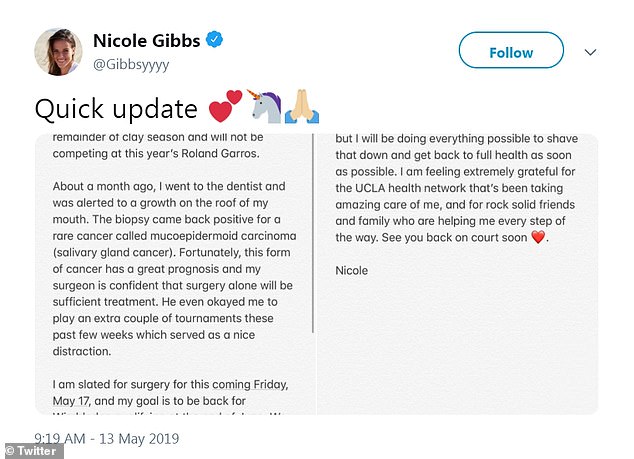 Gibbs first announced her diagnosis in a tweet on Monday, ahead of her surgery scheduled for Friday, May 17.

‘Fortunately, this form of cancer has a great prognosis and my surgeon is confident that surgery alone will be sufficient treatment,’ she wrote.

‘He even okayed me to play an extra couple of tournaments these past few weeks, which served as a nice distraction.’

Gibbs wrote that her recovery period is slated to last between four to six weeks and she hopes to return to the court by the end of June to compete in qualifiers for Wimbledon.

The Stanford University graduate told TODAY she’s tried to keep a positive attitude since her diagnosis and even named her tumor Roofus.

‘We thought that was appropriate,’ Gibbs said. ‘It definitely makes it easier if you view things lightly. So yeah, we gave him a name and he’s getting evicted on Friday.’

During her time at Stanford, Gibbs won several NCAA singles and doubles titles, and was the third player in NCAA history to win both in the same season.