An Iraqi Kurdish man shows his ink-stained fingers after casting his vote in the Kurdish independence referendum in the city of Kirkuk in northern Iraq, on September 25, 2017

The vote in the autonomous Kurdish region of northern Iraq and some disputed areas is non-binding and will not lead automatically to independence, but is seen by the Kurds as a major step towards a long-cherished dream of statehood.

Voters flocked to the polls, eager to show off their ink-stained fingers after casting their ballots, and an overwhelming “Yes” outcome is expected.

Polling stations closed at 7:00 pm (GMT) after voting was extended for an hour. Results were expected within 24 hours.

The vote took place peacefully and in a festive atmosphere, but signs of potential trouble mounted as the day progressed.

In Baghdad, which has declared the vote unconstitutional, lawmakers demanded the government send troops to disputed areas where the referendum was taking place. 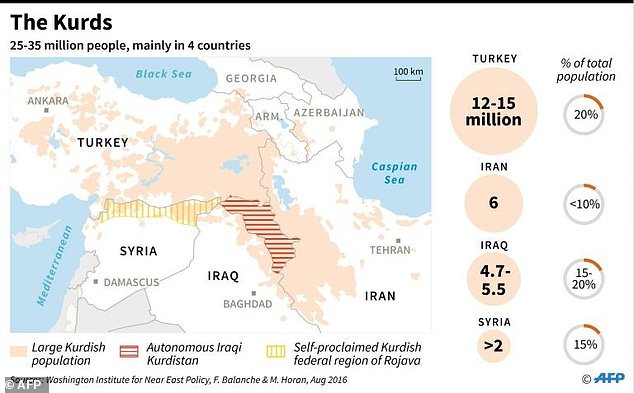 In Istanbul, President Recep Tayyip Erdogan warned that Turkey — which fears the effects of the vote on its own sizeable Kurdish population — would shut its border with Iraqi Kurdistan and threatened to block key exports.

And in Kirkuk, a disputed city where the vote controversially went ahead, security forces deployed on the streets after a curfew was imposed in parts of the city.

Soon after voting began in the Iraqi Kurdish capital Arbil, many men headed to polling stations dressed in traditional Kurdish dress of brown shirt and billowing trousers for the occasion.

“I came very early to be the first to vote for a Kurdish state,” said Diyar Abubakr, 33. 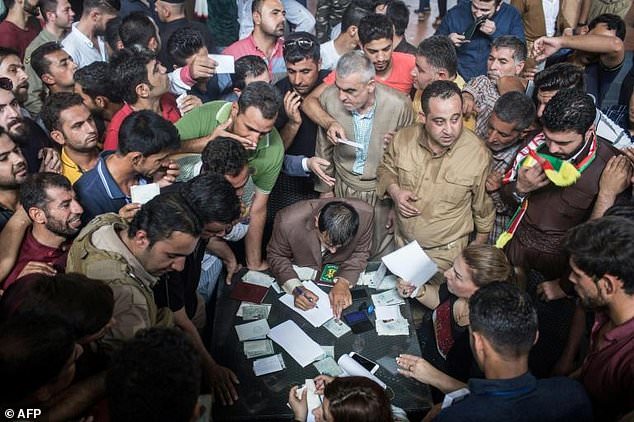 Iraqi Kurds wait to check their identities before voting in the Kurdish independence referendum at a stadium in Arbil on September 25, 2017

“It’s a day of celebration today. That’s why I’ve put on our traditional outfit, which I bought for the occasion.”

One voter even brought a cow to slaughter before the start of the referendum.

“I brought this cow as today the state is born and it’s tradition to slaughter a cow for a birth,” said Dalgash Abdallah, 27.

Veteran Iraqi Kurd leader Massud Barzani, who initiated the vote, cast his ballot early in the morning, smiling and wearing a traditional outfit.

He pushed ahead with the referendum despite the opposition from Baghdad and Ankara, but also from Iran which has its own large Kurdish population, and Western countries who fear the vote could hamper the fight against the Islamic State group in which cooperation between Baghdad and the Kurds has been key.

Polling stations were scattered across the three northern provinces of autonomous Iraqi Kurdistan — Arbil, Sulaimaniyah and Dohuk — as well as in disputed border zones such as the oil-rich province of Kirkuk.

“We will seize our independence through the polls,” he said.

“I’m so happy I could take part in this independence vote during my lifetime.” 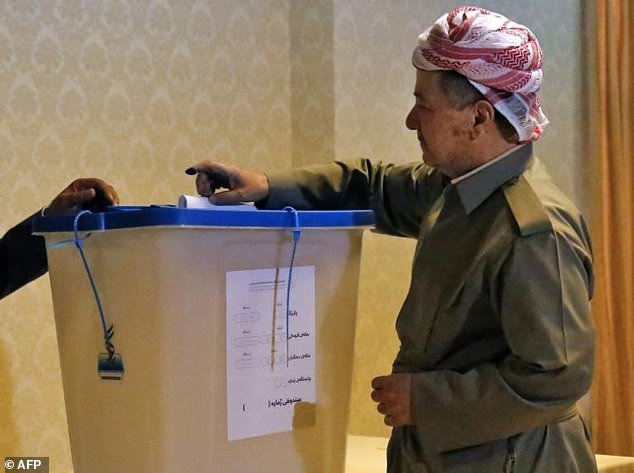 A total of 12,072 polling stations were open for more than 5.3 million registered voters.

Asked about the risks of armed conflict, Abadi’s spokesman Saad al-Hadithi told AFP: “If there are clashes in these zones, it will be the job of federal forces to apply the law.”

Karim al-Nuri, a head of the Badr Brigade which forms part of the powerful Hashed al-Shaabi paramilitary units, suggested the group was ready to deploy to “Kirkuk and the disputed zones occupied by armed gangs, outlaws who do not respond to the army command.” 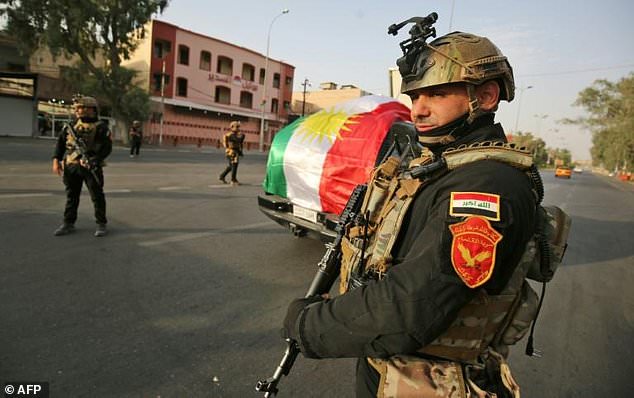 Members of SWAT affiliated to the Iraqi interior ministry deploy on the streets after a curfew was imposed on the disputed northern city of Kirkuk, during the vote on the Kurdish independence on September 25, 2017

Kirkuk, home to Arabs, Kurds and Turkmen, has been a particular point of concern and late on Monday police said a curfew was being imposed in the centre of the city and in Arab and Turkmen areas “to ensure security, monitor the situation and protect the citizens of Kirkuk”.

Abadi on Sunday pledged to take all the “necessary measures” to protect the country’s unity, as his government urged all countries to deal only with it on oil transactions.

The Iraqi Kurds export an average 600,000 barrels per day through a pipeline running through Turkey to Ceyhan on the Mediterranean.

He again urged Iraqi Kurdish authorities to take a step back and appeared to threaten a possible cross-border operation.

“In Iraq, when necessary, we will not shy away from taking these types of steps,” Erdogan said, referring to Turkey’s military operation launched last year in Syria against IS and Syrian Kurdish militia.

Tehran has also increased pressure, announcing on Sunday it had blocked all flights to and from the region at Baghdad’s request.

The foreign ministry in Tehran said its land border with Iraqi Kurdistan remained opened however, reversing an earlier statement. 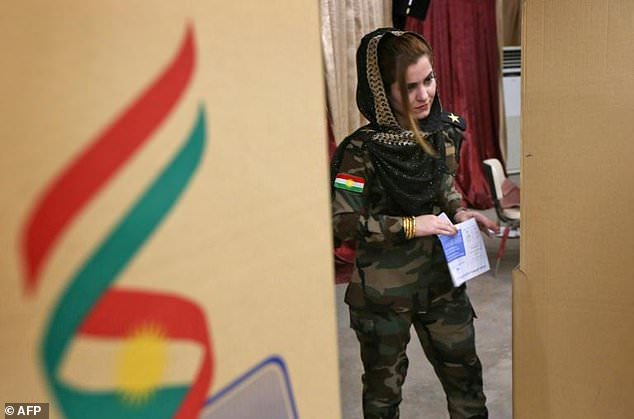 A female member of a Kurdish peshmerga battalion casts her vote in the Kurdish independence referendum at a polling station in Arbil, on September 25, 2017

Left without a state of their own when the borders of the Middle East were redrawn after World War I, the Kurds see themselves as the world’s largest stateless people.

The non-Arab ethnic group number between 25 and 35 million people spread across Iraq, Iran, Turkey and Syria.