A terminally-ill mother who was given the all-clear from cancer which she originally thought was hay fever turned to cannabis oil when cancer returned.

Jannine Jessica McHaffie, 27, was just 24 when she was diagnosed with a rare form of mouth cancer called Adenoid Cystic Carcinoma (ACC) in 2014.

Full-time mum Jannine, from Wisbech, Cambridgeshire, was diagnosed with rare cancer after suffering from constant nose bleeds, which were initially believed to be caused by hay fever.

She was given a grueling six weeks of intense daily radiotherapy before getting the all-clear in September 2015.

This rare form of mouth cancer meant that Jannine had her face rebuilt in extensive surgery and courses of radiotherapy.

Jannine was forced to have the upper part of her mouth removed due to adenoid cystic carcinoma which ravaged her jawbone.

In a series of daunting operations, surgeons have used parts of her fibula leg bone to reconstruct her face but they have now told her there is ‘no cure’. 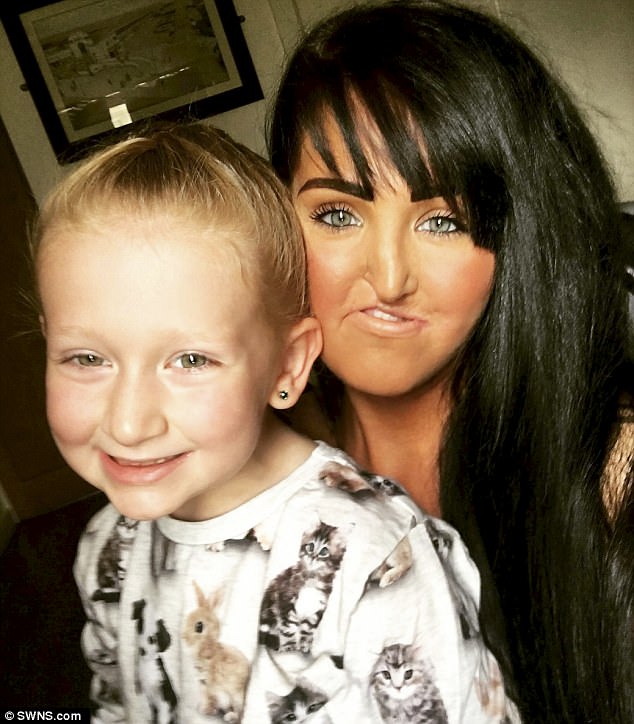 Despite the cancer being terminal, Jannine is determined to make ‘ever-lasting memories’ with her six-year-old daughter Leylah. and is using cannabis oil to help her cope with the pain

As she faces an unbearable wait to see how long she has left to live, Jannine is surviving on a daily cocktail of painkillers and sleeping pills.

WHAT IS CANNABIS OIL?

Cannabidiol oil is a cannabis-derived nutritional supplement that possesses a range of medicinal benefits.

Crucially, cannabidiol oil does not contain any THC, the psychoactive component of cannabis. In other words, CBD does not get you high.

Since last year, it has been legal to buy in the UK, after the Government’s healthcare watchdog approved its use as a medicine under license. Those seeking the oil can find it online or in some high street stores.

Extracted from the plant as a mineral-rich oil, it is usually bottled with a dropper – but also comes in the form of chewing gum, soap, or as a vape oil for e-cigarettes.

It has no side effects, either, and is not addictive, CBD Brothers state.

To cope with the pain, the mother-of-one has turned to cannabis oil to help make ‘everlasting memories’ with her adorable six-year-old daughter Leylah.

Although Leylah is aware that her mum has been unwell, Jannine has decided she is too young to face the whole situation.

Instead, Jannine has bought a series of books that deal with the bereavement that she hopes will help her daughter deal with her death.

She said: ‘Doctors haven’t given me a time limit or any fixed prognosis, I’ve been reading online about this type of cancer and people survive with it for years.

‘I’ve not been given any more information at all, they (the doctors) literally don’t know now.

‘I’ve been talking to one woman who was diagnosed two years ago and who’s still doing great now, so I’m staying positive.

‘It’s going to sound silly, but right now I’m trying anything- you do, you get to a point where you are willing to give absolutely anything a go.

‘So I’m using Cannabis oil to get, it stops the pain, I try to believe that it’s doing something internally.

‘I’ve been eating healthy because I’ve heard that sugar is a breeding ground for cancer, I’ve been just trying to be happy and living life and trying to enjoy it.

The brave mother said that she tries to see the positive in life to stop her daughter from seeing her upset.

She said: ‘It was terrifying when the roof of my mouth started to come off and then fell away completely- all I could feel was bone with my tongue.

‘It was like a knife to my chest really when the doctor told me there was nothing they could do.

‘But I think if you’re going to be down about it and depressed, then it’s going to aggravate the situation.

‘I’ve taken a positive approach from the beginning and been as optimistic as possible, that’s all you can do, I don’t want my little girl to see me all sad.’

I know I’m going to be here in a few years’ time, I just know I am

Jannine started suffering from severe chest pains early this year and went to see an expert about it.

Doctors initially dismissed her symptoms until she insisted on a PET scan – which detects diseases in the body – in August of this year, when they confirmed cancer had returned.

Jannine said: ‘It was only when I kept feeling pain in my lungs and going back to the doctors that they in August gave me a PET scan.

Jannine has decided Leylah is too young to be told about her terminal diagnosis and instead has bought her a series of books to help her deal with her death.

WHAT IS ADENOID CYSTIC CARCINOMA?

Adenoid Cystic Carcinoma (ACC) is a rare cancer of secretory glands, typically originating in the salivary glands though it does appear in other sites, including the palate, nasopharynx, tongue base, larynx, trachea, lacrimal gland, breast, and vulva.

This cancer has a slow, and sometimes relentless, progression characterized by frequent recurrences and can spread to sites such as the lungs, liver, and bones.

Cancer researchers point to genetic alterations as the underlying cause of all cancers.

Only a small portion (perhaps 10 percent) of cancers is believed to be inherited, and ACC is not one of these inheritable cancers.

Rather, as with the vast majority of cancers, ACC appears to develop from genetic alterations caused by a person´s environment, such as through exposure to radiation or cancer-causing agents.

Unlike some other cancers of the head and neck, ACC is not linked to tobacco or alcohol use or infection by the human papillomavirus.

‘They told me cancer had spread to my lungs, it’s slow-growing cancer so had been there for a long time.

Jannine’s father, Melvyn, said: ‘Three years ago, at the age of 24, Jannine was diagnosed with Adenoid Cystic Sarcoma.

‘Numerous failed operations resulted in Jannine living without a roof to her mouth for more than a year.

‘As a single mum to Leylah, Jannine kept going and inspired everyone with her attitude.

‘In April this year, after reconstructive surgery we thought she had turned the corner. She could eat and drink and her tests came back clear.

‘But then in August Jannine was told there was nothing more that could be done. Cancer has spread to her bones and she is terminally ill.’

Her friends and family have set up a GoFundMe page, called Janine’s Dream, to raise money to support Jannine and Leylah in the future.