Terrified British passengers bundle man into a seat as he tries to open EasyJet plane’s doors at 30,000ft during flight to Italy

Terrified passengers were left tackling a man to the floor of a plane after he tried to force open the jet’s door at 30,000 feet.

Passengers on board a packed EasyJet flight from Gatwick to Pisa, Italy, rushed to assist crew members in bundling the man into a seat after he tried to force open the plane’s door twice.

As holidaymakers screamed in panic, the male passenger, who is reportedly in his 30s and from Siena, Italy, was pushed into a seat and surrounded by fellow male travellers.

British passengers were left tackling a man to the floor of an easyJet plane travelling from Gatwick to Pisa, Italy, after he tried to force open the jet’s door at 30,000 feet. (Stock image)

Following the disruptive behaviour, the captain of flight EZY8233 requested the assistance of police in Italy.

Company boss Richard Conyard, 42, told The Sun that the man, who had been wearing a heavy coat, had walked nervously down the aisle and towards the toilet.

After being in the toilet for about a minute, the man proceeded towards the emergency exit and tried to force open the door twice.

Mr Conyard said: ‘When he came out he went towards the emergency exit and grabbed the handle and tried to open the door.

‘One of the crew screamed at him to stop and other passengers started shouting and crying. Everyone was understandably very scared. 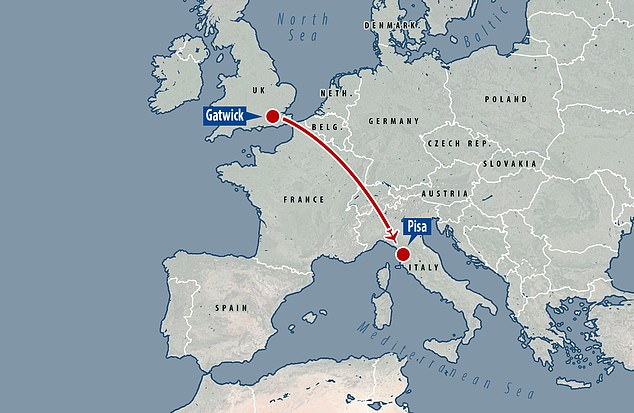 Flight EZY8233, which was travelling from Gatwick to Pisa, requested the assistance of police in Italy following the disruptive behaviour 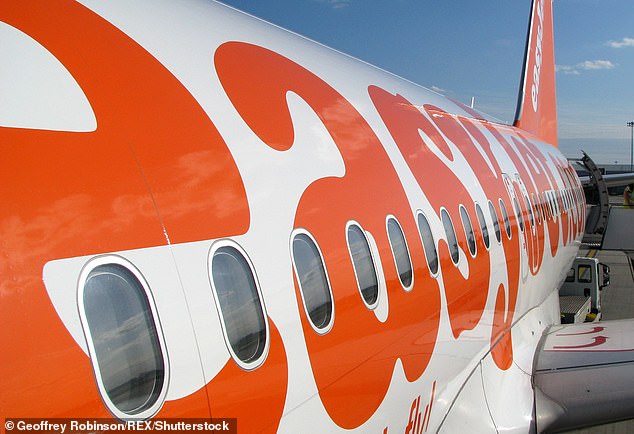 The man in his 30s had tried to force open the plane’s door twice before passengers and crew staff bundled him into a seat. (Stock image)

‘A couple of guys went to help. I joined them. We bundled him into a seat. Some women nearby were asked to swap seats so all these burly blokes could sit around him and box him in.’

According to plane experts, opening the door to the plane at 30,000 feet would have resulted in a sudden decrease in temperature and compression- the result of which could have seen passengers sucked out of the aircraft.

After making its descent, the male passenger was questioned by airport police in Pisa.

An easyJet spokeswoman said: ‘easyJet can confirm that the Captain of flight EZY8233 from London Gatwick to Pisa on 24 April requested police to meet the aircraft on arrival as a passenger made an attempt to open one of the cabin doors during the descent.

‘While it would not have been possible to open the door due to the cabin pressurisation, the crew responded quickly to ensure the passenger remained seated until landing.

‘easyJet’s cabin crew are trained to assess and evaluate all situations and to act quickly and appropriately to ensure that the safety of the flight and other passengers is not compromised at any time. Safety is always easyJet’s highest priority.’