A terrified father was left red-faced after pulling over his car to cautiously help what he thought was a leopard lying injured in the road – only to discover it was ‘some tart’s coat’.

Ben Lilly was driving along the A646 near Hebden Bridge, West Yorkshire, on Saturday morning when he noticed the spotty shape sprawled across on the tarmac.

The IT consultant spun his car round and headed back in the same direction – eager to catch a glimpse of the terrifying animal up close.

Ben Lilly had been heading down the A646 near Hebden Bridge, West Yorkshire, on Saturday morning when he noticed the spotty shape sprawled across on the tarmac 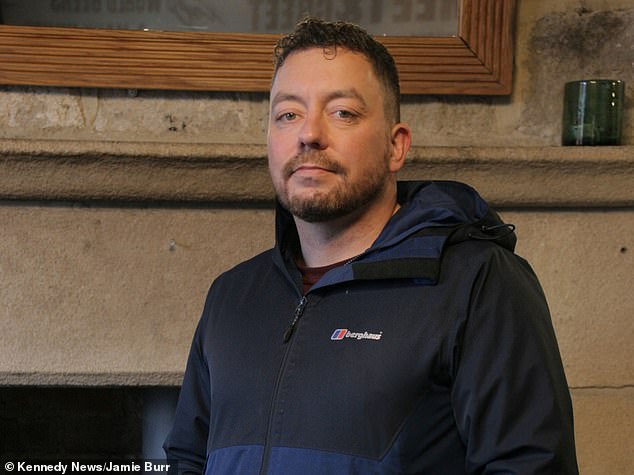 Father of two Ben Lilly, pictured, thought he had spotted an injured leopard while driving through West Yorkshire and decided to investigate further.

Mr Lilly ‘cautiously’ got out of the vehicle and approached the suspected big cat with his ‘heart racing’, admitting that he was worried if he got too close he might have his face ‘ripped off’.

But the 40-year-old father-of-two was embarrassed to discover the fearsome feline was just an abandoned onesie complete with tail – left by weekend party-goers.

Admitting his ‘silly’ mistake on Facebook, Mr Lilly wrote: ‘Careful! Dead leopard in the road on way to Halifax! Oh no, it’s some tart’s coat from last night, can’t believe I turned back for this!’

Mr Lilly’s post was shared more than 5,800 times and received more than 170 comments – with others claiming they had to ‘look twice’ at his pictures too.

Mr Lilly, from Halifax, West Yorkshire, said: ‘My heart was racing with a kind of excitement.

‘I thought ‘is this a big cat?’ It would be an amazing thing to find.

‘I saw something in the distance as I was coming round the bend and slowed down, giving it a wide berth in case it was an injured animal.

‘As I passed it, I looked out the passenger’s window and saw the markings on it.

‘It had the tail bit on it too, so it looked really real while I was driving. 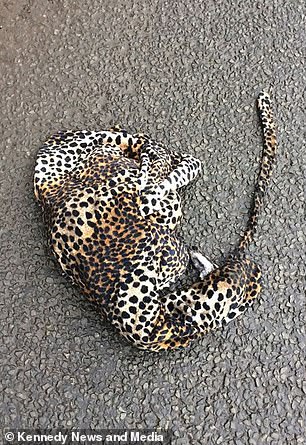 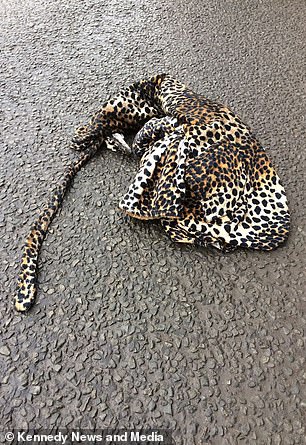 ‘I thought “wow”. You hear of these sightings of big cats and around the Halifax area, there have been reports before.

‘I spun round where I could, turned round and drove back along. I looked again – it looked real. I then parked behind it and looked from within the car.

‘I got out cautiously, because I didn’t want something taking my face off, but as soon as I looked at it from the other angle I started laughing.’

As Mr Lilly stopped his car, he slowly opened the door for a closer look – eager to avoid being attacked by a wild leopard.

With his phone camera poised ready to snap a picture for his girlfriend, he realised he had been mistaken – the animal carcass was in fact an abandoned onesie. 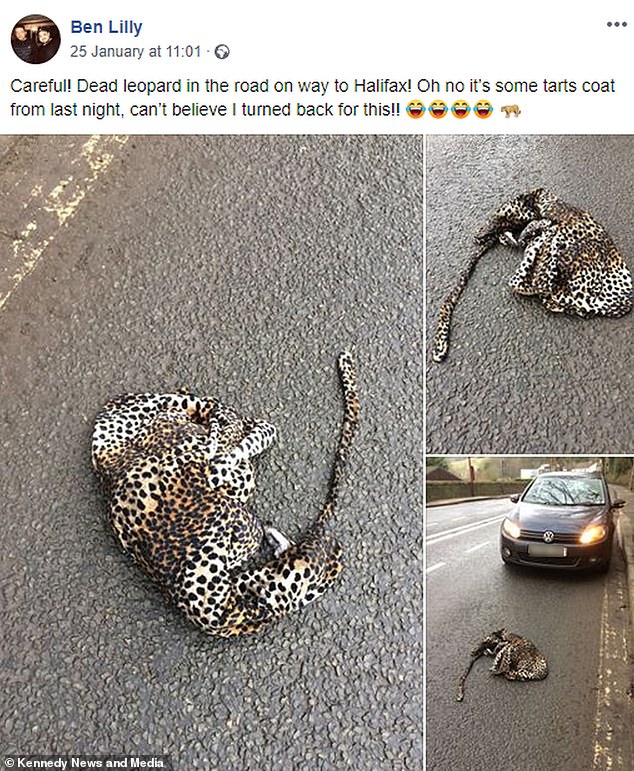 The crumpled garment was dumped in a pile on the road, with a long spotted tail spread out next to it.

Mr Lilly said: ‘I crept up with my phone out and as the angle changed, I felt like I was on candid camera.

‘I was chuckling to myself. I started laughing then to save my own embarrassment.

‘I pulled up to a onesie. That explains the tail on it. At the time I thought it was a woman’s fur coat.

‘I thought someone had had a good time and left their coat behind.

‘Living near the Pennines you do often see road kill in the road – foxes, badgers or the odd person’s pet. 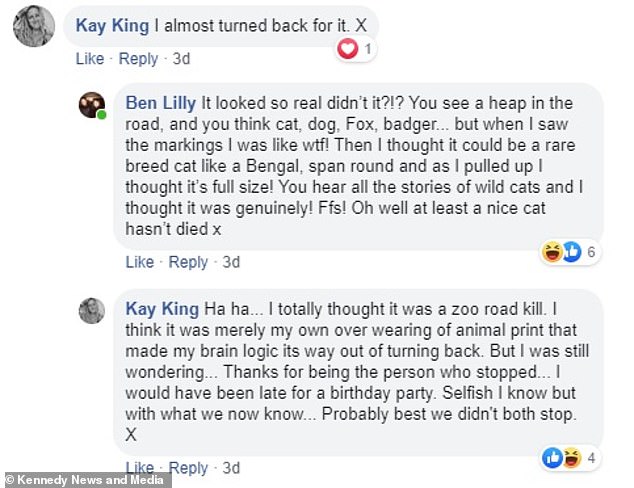 ‘When I came back later, someone had pushed it onto the pavement. A few people had commented saying they’d also seen it.

‘Other drivers were obviously thinking the same thing, but I was just silly enough to stop.

‘I made a joke [about the ‘tart’s coat’ which a couple of people might have thought was a little bit sexist, but at the time it had been a Friday night, it was Saturday morning and Halifax is a bit of a drinking town.’

As Ben’s post went viral, other social media users commented that they had also seen the strange creature earlier that day – but didn’t stop.

Jayne Lee said: ‘Bloody hell! I thought the same as I drove over it this morning.’

Kay King said: ‘I totally thought it was a zoo road kill. I think it was merely my own over-wearing of animal print that made my brain [talk me] out of turning back. But I was still wondering…’

Lisa Harry said: ‘I had to look twice as well.’

Jayne William said: ‘This is the funniest thing ever.’