Terrified girl, five, hacked her own hair off after being caught up in sick Momo challenge online

A terrified girl hacked off her hair after being caught up in the sick Momo challenge online, a hair salon owner has claimed.

The five-year-old was allegedly following instructions from the creepy character which originates from an art gallery in Japan.

There are fears the character has now started to appear in YouTube videos and has reportedly popped up in children’s programmes and apps.

The youngster’s mother was reportedly left traumatised following the event and was forced to take her little one to the hair dressers to salvage the rest of her hair. 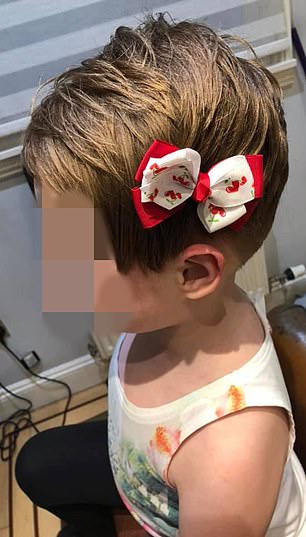 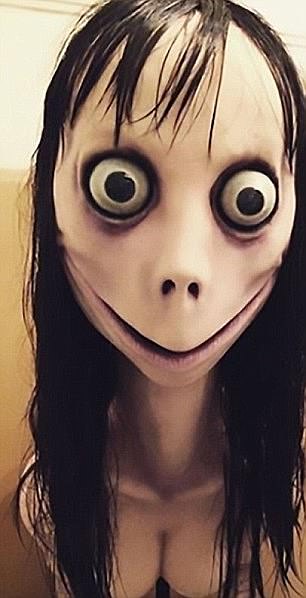 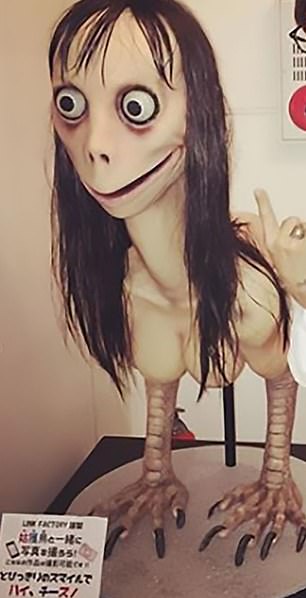 A hair salon where the young girl had her hair cut posted images of what the child had done to her hair and urged parents and carers to be more vigilant online.

The post, from Toddler Trims in Gloucestershire said: ‘So I’ve just had a beautiful little girl in affected by this sick MOMO challenge!! If you are unaware this sick human/mutant is hacking into peppa pig, fortnight, minecraft etc..

‘Any & most children’s YouTube videos, telling them to cut there hair off, hold Knives up to there throat, set themselves on fire & that it will suck all the blood from there body … this little girl is off to the doctors after her new haircut.

‘She is five years old & still keeps talking about momo, her mother is absolutely devastated!!’ 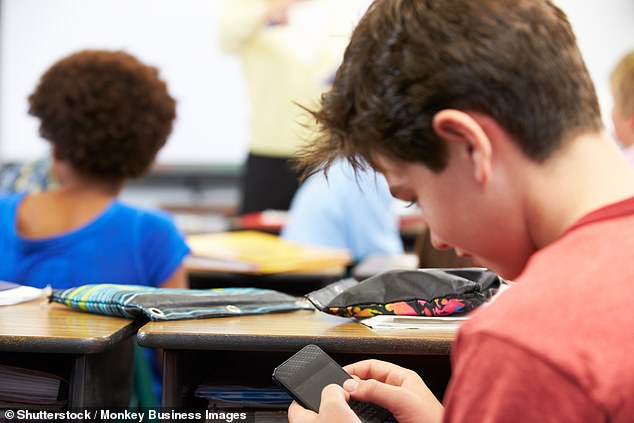 The salon managed to give the girl a cute pixie haircut but said that the youngster wouldn’t promise to not listen to Momo again.

‘I couldn’t help but feel this monster has brainwashed her.’

It adds: ‘Her mother is pretty traumatised & turning the internet off for now. She has asked me to make everyone aware of this sick sick challenge & what it is doing to our babys!!!

‘Please search #momochallenge on fb/google & keep your babies off the net… this could’ve been a lot worse!’ 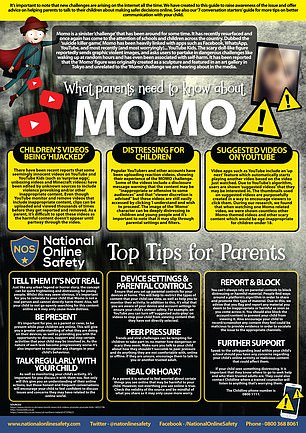 The post has been shared nearly 60,000 times and has received 17,000 comments on Facebook with many people fearing the impact such videos are having on children.

Reports from last year suggested that individuals had been using the character to connect with children via WhatsApp, to then send them instructions for the children to harm themselves.

The character would then threaten the children if they did not carry out the act.

Fears were intensified this week as it was reported that the character had appeared on children’s programmes on YouTube Kids.

Schools across the UK have written to parents to tell them that Momo is popping up in seemingly innocent Peppa Pig episodes, as well as Fortnite, Minecraft and videos showing kids opening Kinder Eggs and other treats.

No clips of this happening have yet been identified but schools have now responded to guidelines issued by the National Online Safety Group which recently issued guidance on Momo. 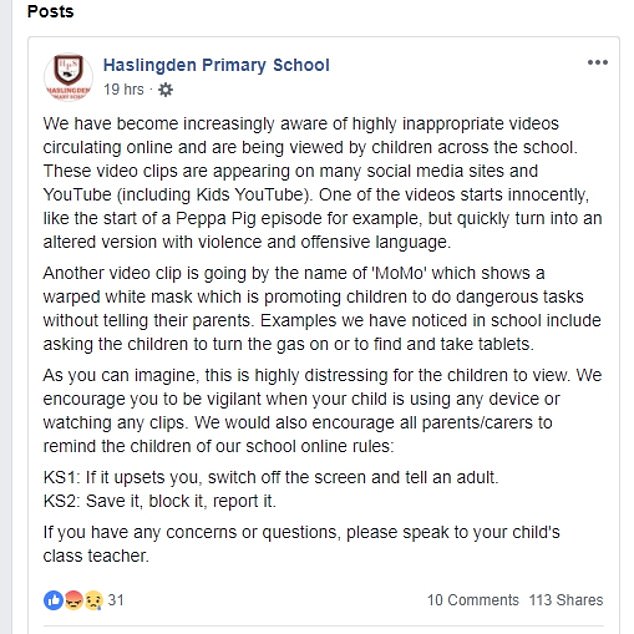 Haslingden Primary School, Rossendale, near Blackburn said in statement: ‘We have become increasingly aware of highly inappropriate videos circulating online and are being viewed by children across the school.

Depression among teens soars by 50% in a decade

Teenagers today drink less and take fewer drugs than their elders of a decade before, a study found yesterday.

But instead ‘Generation Sensible’ are more likely to suffer from depression, obesity or engage in self-harm.

But 9 per cent of those born in the 1990s suffered depression by 14, against 15 per cent for those born at the millennium.

Rates of self-harm went up from 12 to 14 per cent between the two groups, with girls more likely than boys to be depressed or harm themselves. Four per cent of the older group were obese, against 7 per cent of the younger group.

‘Another video clip is going by the name of ‘MoMo’ which shows a warped white mask which is promoting children to do dangerous tasks without telling their parents.

‘As you can imagine, this is highly distressing for the children to view. We encourage you to be vigilant when your child is using any device or watching any clips.’

Other warnings were issued by Newbridge Junior School in Portsmouth and Offley Endowed‏ Primary school, near Luton, Bedfordshire, which said this morning: ‘We are aware of Momo challenges that are appearing as pop ups on Youtube kids, Fortnite & Peppa Pig etc & will be talking to the children about it in Assembly.

‘Please be vigilant with your child using IT. We are asking children to tell a grown up & not click on Momo images.’

Northolt Community Special School in Hull, East Yorkshire said: ‘We are aware that some nasty challenges (Momo challenge) are hacking into children’s programmes.

‘Please be vigilant with your child using IT, images are very disturbing.’

Craig Wardle, headteacher of Cleve House school in Bristol, sent a letter to parents warning them about the online craze. 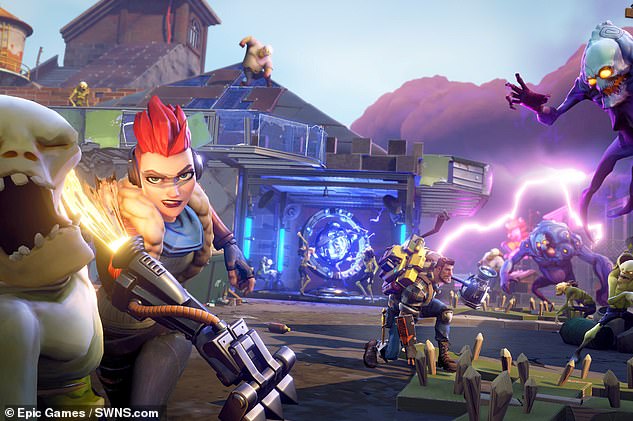 Videos of computer game Forntite, hugely popular among children, are also being targeted by the Momo challenge

It said: ‘Light-hearted and fun at the outset, this game experience quickly darkens, absorbing players who are encouraged to perform acts of violence and self-harm through a series of progressively risky tasks. It is rapidly spreading across the world.

‘The challenges issued in this game present a serious risk to the safety, welfare and well being of young people in our school and in the UK.’

Mr Wardle, 51, said each class has been spoken to by teachers about how to stay safe online.

He added: ‘It is something that came out of the blue. The first time we came across it was when a concerned parents got in touch. 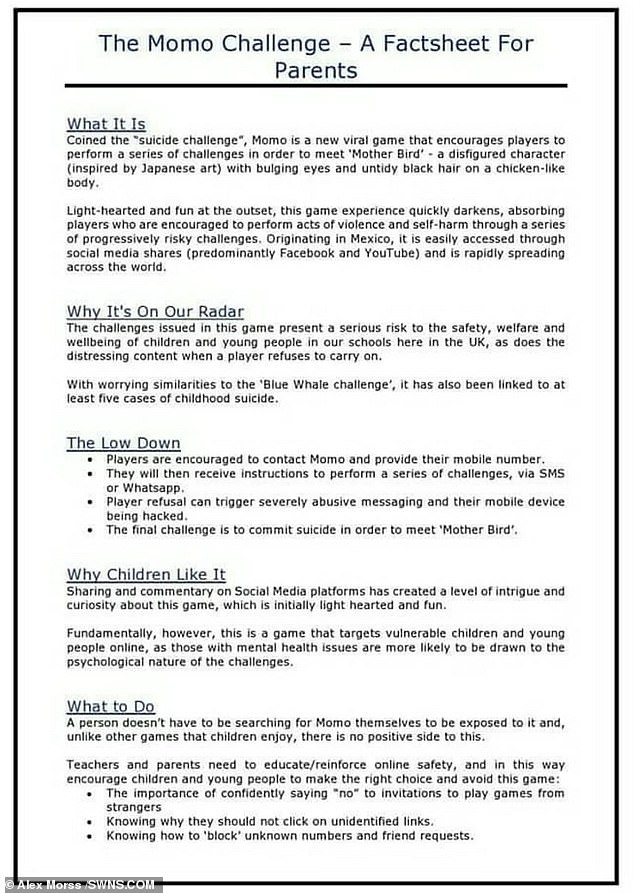 ‘It was on the radar of some key stage two children so it’s fortunate a parent raised it to us.

‘We have discussed it with each class. We talked to them about what to be cautious about online. Things don’t always turn out to be what they appear as.

‘It is a danger and it would be irresponsible for us to disregard it. There are enough dangers out there as it is and we have got to be aware of any new ones that come along.’

What is the Momo ‘suicide game’ and where did it originate?

The Momo challenge was first reported in July last year, and was described as a new ‘Blue Whale’ style suicide game.

It started on WhatsApp, and challenged users to contact ‘Momo’ by sending messages to an unknown number.

The user was then hounded with frightening images and violent messages. 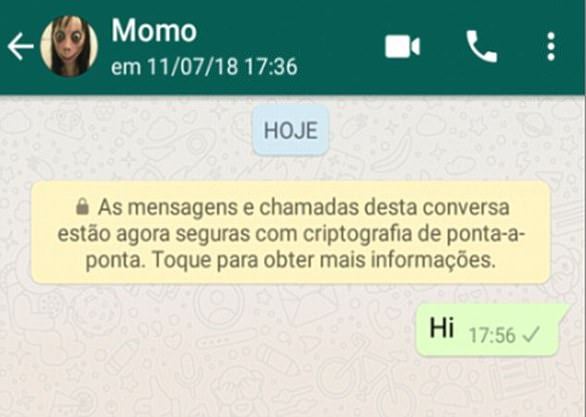 Children are contacted on WhatsApp and other online platforms by the cartoon Momo, who is encouraging children to self-harm

No one knows exactly where Momo originated, or who is behind the disturbing trend, though it was linked to at least seven phone numbers beginning with codes from Japan and multiple countries across Latin America.

The Momo challenge then started popping up in videos that were posted to social media.

The Momo avatar was created by Japanese special effects company Link Factory and designed by Midori Hayashi who has no relation whatsoever to the game.

Momo’s features include a painfully gaunt face, bulging eyes and an unnaturally thin and long smile.

In September a 12-year-old girl and 16-year-old boy in Colombia are said to have killed themselves after playing the a suicide challenge game on WhatsApp.

The tragic deaths happened within the space of just 48 hours in the municipality of Barbosa, in the north west Colombian area of Santander.

Local media report that the body of the 16-year-old boy was found first and that it is believed he knew the 12-year-old girl.

He reportedly passed the game Momo game onto her before his death.

Within 48 hours, she too was found dead. It is reported she was found hanged.

The two youngsters who died had their phones seized by police, who say they found messages linked with the game.