‘I thought it was going to eat my kids!’ Terrified mother says a ferocious £4,000 designer Savannah cat on the loose in London’s leafy Hampstead lunged at her children and left them too terrified to play outside

A mother fears her two young children were just seconds away from being mauled by a crazed ‘supercat’ that was the size of a dog as they played in their back garden.

Dr Neetu Nirdosh said they are now too terrified to play outside after the beast circled them on the grass, baring its huge fangs before biting and tugging at her daughter’s jumper.

The animal, believed to be a £4,000 Savannah cat – a cross between a domestic cat and a wild African cat called a serval – lunged at the youngsters at their home in Hampstead.

The hybrid cat is still believed to be on the loose in the leafy North London area, but police said they are not investigating. The RSPCA said they were aware of the incident, but had also not launched an investigation.

Mother-of-four Dr Nirdosh, told how she heard her son Alexander, four, and daughter Falcon, five, scream that a ‘cheetah’ had entered their garden on Saturday afternoon.

The animal, believed to be a £4,000 Savannah cat, a cross between a domestic cat and a large eared wild African cat called a Serval (pictured) – lunged at the youngsters at their home in Hampstead, north London.

As she peered out of the kitchen window and saw the large leopard spotted cat,  ‘maternal instinct took over’ and she ran outside and desperately tried to scare it away.

Dr Nirdosh told MailOnline: ‘I popped my head to the side and I saw this big animal. It was tugging at my child’s jumper, circling them.

My heart jumped out of my chest. I dived in. Maternal instinct took over.

‘I thought it was going to eat my kids.

‘It kept opening its mouth really wide. I threw our toy horse at it. We all ran back inside and locked the door.’ 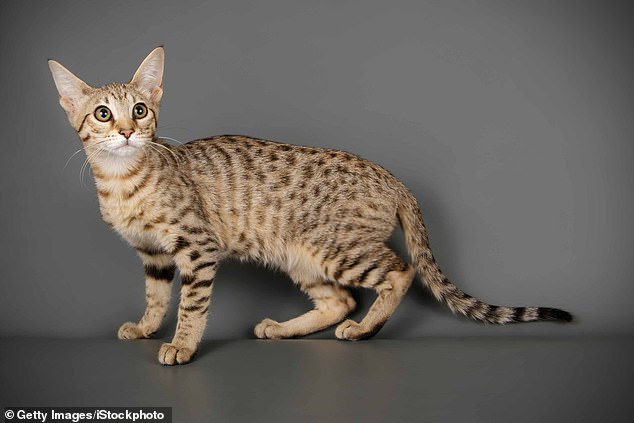 Mother of four Dr Nirdosh, told how she heard her son Alexander, four, and daughter Falcon, five, scream that a ‘cheetah’ had entered their garden. Pictured: A Savannah cat. They can grow to 17 inches tall

The family, including her two other children, watched in horror as the animal savaged the toy horse through the glass patio doors on Saturday afternoon.

Dr Nirdosh, a cosmetic surgeon with a Harley Street practice, who has a number of celebrity clients, said the animal bared it ‘huge fangs’ as it savaged the toy horse, before running off into the undergrowth.

She added:  ‘It stayed there for ages, looking at us through the glass. My heart was going like you wouldn’t believe.

‘If I didn’t get there in time I dread to think what would have happened. It was terrifying.  It was matter of seconds – that was all.

‘It was muscular, powerful, it had huge fangs. It was like something out of a wildlife programme. We stayed inside as it stayed in the garden. I couldn’t open the doors.

‘My children are too scared to go outside and play anymore. I wouldn’t let them anyway. Not until the animal is caught.’

A spokesman for the RSPCA said: ‘It looks like this may be a Savannah cat which is a hybrid, bred from a serval (a small African wild cat) and a domestic cat.

‘They are a little bigger than domestic cats and are sometimes kept as pets, while some require a Dangerous Wild Animal licence, others do not.

‘It is likely a pet which is why it was confident and not frightened around people.

‘We’ve not been contacted about this cat but would urge anyone with concerns about a dangerous wild animal on the loose to contact police.