Terrifying list of popular everyday appliances recalled from Kmart and Target over fears they could KILL – so is there a death trap in your kitchen?

Unwitting consumers could face scaldings, burns, electric shocks, lacerations, fires, and even gas explosions in their family home from everyday appliances they may not know have been recalled.

Consumer group Choice say there are about 30 particularly dangerous products sold at retail giants including Kmart and Target still lurking in Australian kitchens despite being taken off the shelves within the past five years.

Every year there are about 650 faulty and unsafe products recalled across the country, but only half of them are actually returned for a refund – meaning there are ticking time bombs still sitting in the kitchens of family homes.

These products include everything from kettles to pressure cookers, coffee makers, toasters, microwaves and blenders. 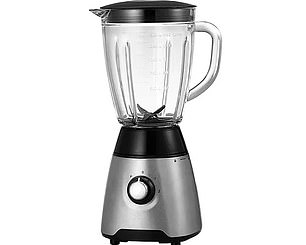 The Sunbeam Sous Chef Stir Multi Cooker Model MU 3000 (pictured left) was found to serve up undercooked meat, while the Target stainless steel Table Blender 5L Tarb100 500W (right) was recalled as it can cause lacerations 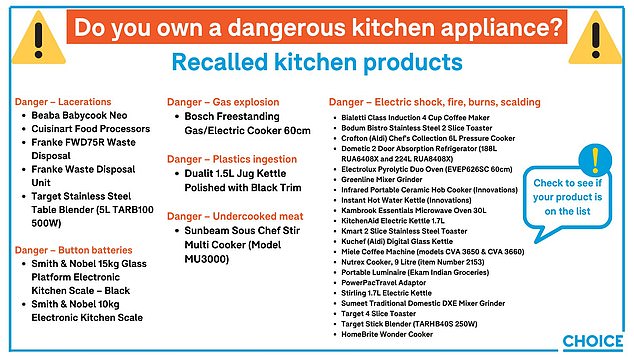 Consumer group Choice say there are about 30 particularly dangerous products sold at retail giants like Kmart and Target, still lurking in many Australian kitchens despite being taken off the shelves within the past five years

‘There could be hidden dangers lurking in your kitchen,’ Choice editor Marg Rafferty said.

‘Choice is encouraging every Australian to check their kitchen for recalled appliances, get the refunds they’re entitled to and keep their loved ones safe.’

Among the dangerous goods are two of Kmart’s stainless steel toasters which were found to be at risk of causing electric shocks, fire and burns.

A toaster sold at Target was also found to have the same problems, along with a Target stick blender.

Other products with shocking hazards include a Dualit 1.5L jug kettle which has a high risk of plastic ingestion and a popular Sunbeam Sous Chef Stir Multi Cooker that serves up dangerously undercooked meat. 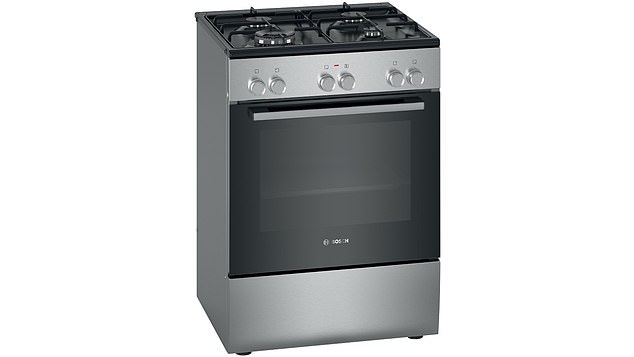 The Bosch Freestanding gas/electric cooker 60cm, has a design flaw which can cause it to dangerous leak deadly gas and potentially explode

Several button batteries for kitchen scales were also found to cause injury and the Bosch Freestanding gas/electric cooker 60cm, has a design flaw which can make it leak deadly gas and potentially explode.

Choice warns customers to regularly check which products have been recalled and inspect their current kitchen appliances to make sure they’re not faulty.

‘Products like pressure cookers and blenders can have their seals deteriorate over time,’ Ms Rafferty said.

‘If your appliances are a few years old, it’s worth checking if any seals are still working effectively.

‘It’s worth inspecting the doors and hinges on products like microwaves and assessing any gas appliances you have for potential points of leakage.’