A Massachusetts shared the terrifying moment they spotted a great white shark circling and brushing up against their boat during a sailing trip.

Siblings Sean and Serena Colbert and their cousin Mallory Fey were out on the ocean between Plymouth and Provincetown on Friday when the terrifying encounter occurred.

Sean quickly took out his smartphone and began filming after the shark’s fin surfaced at the top of the water close to the 22 foot boat.

‘That is unreal!’ he can be heard saying as the predator swam closer to the vessel.

The crystal clear waters off the coast of Cape Cod ensured a full view of the creature as it kept close to the sailboat.

The incident proved to be too much for one of the female family members on board the boat who gasped as she stated: ‘Oh my God!’ 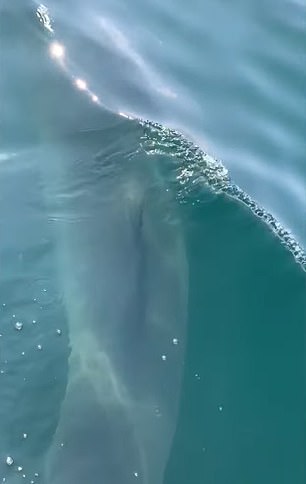 In an interview with CBS 4, after the terrifying video of the shark went viral on the internet, Sean revealed he was about to take a dip in the water just moments before.

But as he was about to jump, he spotted the predator’s fin surface above the water, he stayed put in the boat.

The family say they’re still stunned by the sighting in spite of the fact they grew up sailing on the waters of Cape Cod, where shark sightings are common.

‘It was like the biggest thing I’ve ever seen,’ Mallory stated.

‘It was huge, it seemed like it was the size of our boat,’ added Serena, before the family estimated the creature was between 16 and 17 foot.

Meanwhile, seven other shark sightings since Friday forced the temporary closure of four beaches in the area.

On Monday, a fisherman spotted a great white shark just east of Brown’s Bank in Plymouth – however it remains unclear if it’s the same predator caught on camera in the family’s Friday video. 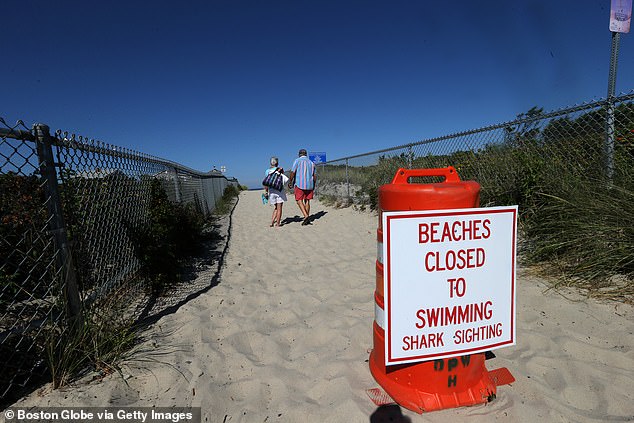