Terrifying moment a massive 1.5m-long carpet python is pulled from an office desk in Queensland

A snake catcher filmed the moment he pulled out a massive snake from inside an office.

Stuart McKenzie from Sunshine Coast Snake Catchers was called to an office in Yandina, Queensland after staff spotted a 1.5m-long carpet python.

When Mr McKenzie arrived at the office the snake seemed to have disappeared – but it was later found lurking inside a pigeonhole.

Stuart McKenzie from Sunshine Coast Snake Catchers was called to an office that specialised in marketing material for schools in the Queensland town of Yandina after staff spotted a 1.5m-long carpet python

Mr McKenzie panned the camera around the desk to show nothing seemed out of place.

‘They saw a snake on the move in the office building and luckily I found it pretty quickly,’ he said in a video uploaded to Facebook.

He moved a paper tray to the side which revealed a small pigeon hole where documents were stored, but the snake still could not be seen.

He zoomed the camera to focus on the bottom shelf and switched a light on which revealed a large carpet python laying on top a stack of documents. 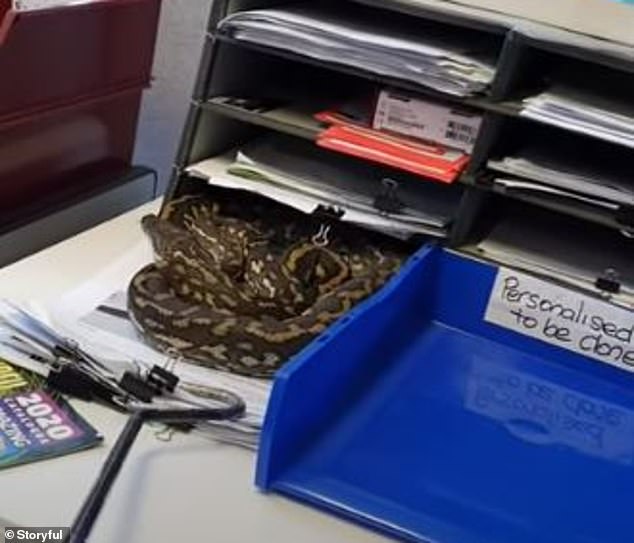 Staff said the python disappeared as he couldn’t be seen in the office, but Mr McKenzie showed the snake had hidden inside a small pigeon hole next to a desk

‘You wouldn’t even know he is there,’ Mr McKenzie said.

Mr McKenzie pulled the snake out of the pigeon hole and said he was surprised how big it was considering where it was hiding.

‘It’s lucky one of the staff didn’t reach in to grab some paperwork out,’ he said.

Mr McKenzie had no idea how the snake got into the office but said the building is located near an industrial area where some snakes are located.

He theorised the carpet python may have entered through the garage door, which is left open by office staff during work hours.

The large carpet python was safely removed from the office and relocated back in the bush. 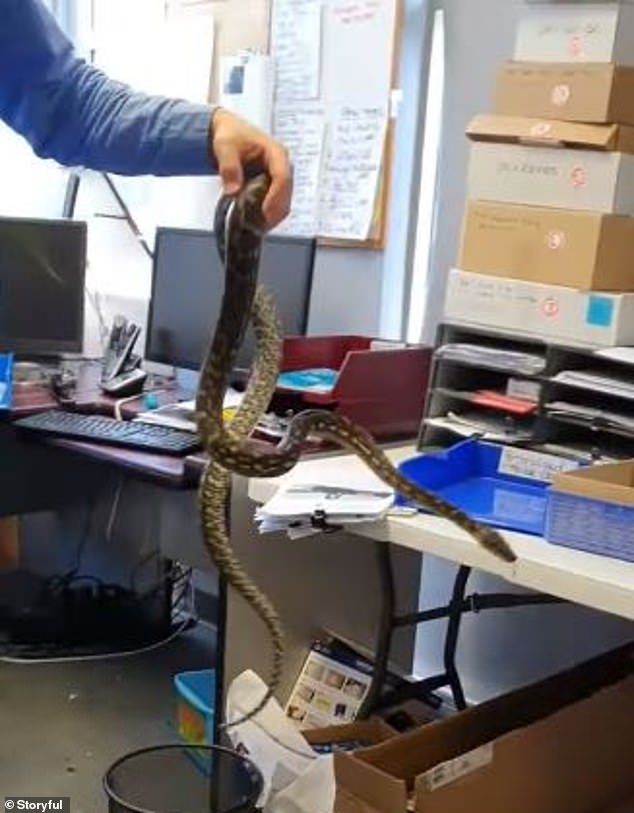